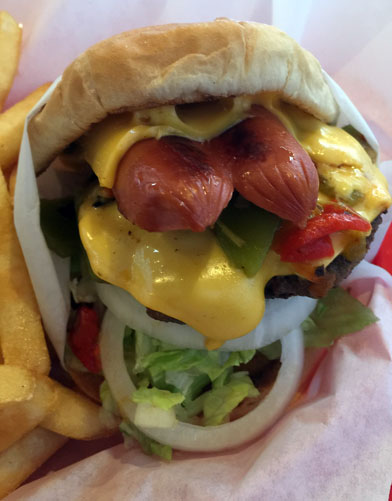 Cultural shock! It’s been oft repeated that the United States and England are two nations separated by a common language. I had no idea how much the two nations are separated by more than language until 1979 when stationed at Royal Air Force Base Upper Heyford just outside of Oxford, England. Cultural differences were especially evident in dining experiences. Back then American fast food restaurants were as scarce in England as fish and chips restaurants were in the United States. McDonald’s, Burger King and Pizza Hut had just starting to make inroads in the megalopolis of London. In smaller cities, if we wanted an American hamburger, the only option was a chain of England-based hamburger restaurants named Wimpy’s. During my first visit to Wimpy’s there were many reminders we were not in America.

First, service was on New Mexico time (and I say that with the utmost affection); the concept of fast food was apparently lost on the wait staff. Secondly, portions were parsimonious. The burgers weren’t the size of a frisbee the way American servicemen liked them. Soft drinks were merely eight-ounces, not the barrel-sized cups we were used to. Worse, we were charged for refills. Last, and most important, the burgers were–as most English food tended to be at the time–bland and mediocre (or worse). Give us McDonald’s any day!

As those of you old enough to remember the characters might have surmised, Wimpy’s was named for Popeye’s friend J. Wellington Wimpy, an erudite and manipulative glutton. Wimpy was, in just about every way, Popeye’s “foil,” a living contrast to the “strong to the finich” sailor man. Where Popeye was prone to wild antics and explosive blow-ups, Wimpy was the consummate “straight man.” While Popeye had the stereotypical, albeit G-rated vocabulary of a sailor from the Bronx, Wimpy was highly intelligent and well educated. Popeye loved to “eats me spinach” while Wimpy was never seen without a hamburger in hand.

Interestingly, Albuquerque’s Barelas neighborhood has a restaurant staking a claim to being the home of the “original” Wimpy Burger. Founded in 1922, the Red Ball Cafe which closed in 2015 was a Route 66 mainstay for more than three-quarters of a century. McDonald’s single-sized Wimpy burgers with cheese are still available on the menu for under a dollar. The irascible Popeye and his supporting cast of characters festoon the restaurant’s walls while comic strips under glass decorate the table tops.

In 2008, a restaurant by the name of Wimpy’s was launched just minutes north of Old Town. Though not affiliated with the Red Ball Cafe, the name engendered obvious confusion among diners (and reportedly some contentiousness between both ownership parties). Wimpy’s has since been renamed “The Little Red Hamburger Hut,” a name that just fits (though regulars still call it “Wimpy’s.” It is situated on the intersection of Mountain Road and Sawmill, which back in 1900 was considered beyond the Albuquerque city limits. In the early 1900s a giant sawmill operated in the area and many workers built adobe and/or frame homes in the area. There were also a couple of grocery stores serving the little community as well. I believe Wimpy’s is located in one of those.

The timeworn edifice has charm to spare. The solidity of distressed oak plank flooring heavily trod upon by generations speaks to the quality of construction. On the corner of the main dining room stands a hand-painted fireplace, the symbol of hospitality and warmth. The ceiling is bamboo matting (which in New Mexico is a multi-purpose utility used as flooring, ceiling and even fencing). The Little Red Hamburger Hut provides diners with a nostalgic trip back to a carefree, more innocent time before the infestation of chain restaurants. Even if you’re not old enough to remember it, you’ll appreciate the sundry bric a brac from the Fabulous Fifties and Swinging Sixties.

Diners queue up before the restaurant opens so they’re first in line to place their order in a room adjacent to the main dining room. The menu enjoys you to “enjoy New Mexico’s famous burgers.” Burgers are the primary draw here, but not just your standard, conventional burgers on a bun. Burger options start with the “Little Red” which you can order in small, medium or large sizes. The Little Red is available with either red or green chile (both complementary as well as is cheese). A combo meal includes fries and a large (barrel-sized) beverage of your choice with free refills. You can also have your burger on a tortilla. There’s even taco burgers and hot dog burgers which are just what their names indicate they are.

Unless you specify otherwise, the burgers are cooked well done, but as you’ll happily realize, that doesn’t mean charred to a desiccated mess. Though the beef patties are fresh and delicious, they aren’t as juicy as burgers done to a lesser degree of “doneness.” It’s a likelihood that their desiccation may also be the result of the heinous spatula press (for which cooks should be shot). The burgers are hand-formed each morning from freshly ground beef. They’re available in medium (quarter-pound) and large sizes. It’s very evident that freshness is a hallmark of the burgers and that’s all ingredients, not just the beef. All produce is purchased daily to ensure the optimal freshness and flavor.

14 March 2010: The Little Red is constructed much like other burgers in town–lettuce, onion, tomato, cheese, green chile–but like any classic structure, it’s built very well and it’s built to order–to your exacting specifications with your satisfaction guaranteed. The buns are lightly toasted, the beef is wonderfully seasoned and hand-pressed into a thick patty, the ingredients are fresh and the green chile (spelled “chili” throughout the menu) is about medium on the piquancy scale. It takes just a bit longer (not quite English time) but it’s worth the wait.

3 September 2010: A New Mexico alternative to the Little Red may one-up its more popular brethren between buns. That alternative would be the tortilla burger, a large tortilla dressed any way you want it. Impressively, the beef–a large patty cut in half — spans nearly the entire length and breadth of the tortilla. It’s best fully dressed–green chile, tomatoes, onions, lettuce and cheese and is available in small, medium and large sizes.

3 February 2016: The Little Red Hamburger Hut solves the dilemma as to what you should have when both a hamburger and a hot dog sound good but you don’t have the funds for both. By combining a hot dog within a burger, you have the best of both worlds. The hot dog burger special (medium burger, 20-ounce beverage and fries) is proof that hot dogs and burgers can coexist in harmonious deliciousness under the same canvas. That canvas is a bun that’s probably not much more than three-inches around. When ingredients are piled on, the burger is nearly that tall, too. The buns are hard-pressed to hold in all the ingredients and will probably fall apart after a few bites, so make sure to have plenty of napkins because you might be eating with your hands.

3 September 2010: New Mexico’s contribution to Health.com’s “50 Fattiest Foods,” a state-by-state hall of infamy, was our ubiquitous Frito pie. The version low-lighted in the article contained a pants-popping 46 grams of fat and 14 grams of saturated fat. Still, it’s hard to resist the Land of Enchantment’s most egregious fat-offender, especially since it looks like a healthy lettuce, tomato, cheese and onion salad when it’s delivered to other tables. Underneath the salad ingredients, however, is a mound of ground beef covered in chile and cheese surrounded by Frito’s corn chips. The Little Red Hamburger Hut crafts a classic New Mexican Frito pie. The chile is likely Bueno brand red chile, a made in New Mexico chile which means it’s good and has a piquant bite without no canned or cumin aftertaste. The chile is slathered on generously.

The fries are strictly out-of-the-bag and nothing special other than they’re served steamy and hot. It takes a lot of ketchup and a lot of salt to make them palatable, but that’s the only downer to a meal that’s otherwise quite memorable.

The Little Red Hamburger Hut is the antithesis of the Wimpy’s chains in England. It’s an excellent purveyor of New Mexico’s green chile cheeseburger and one of the friendliest restaurants in the Duke City.