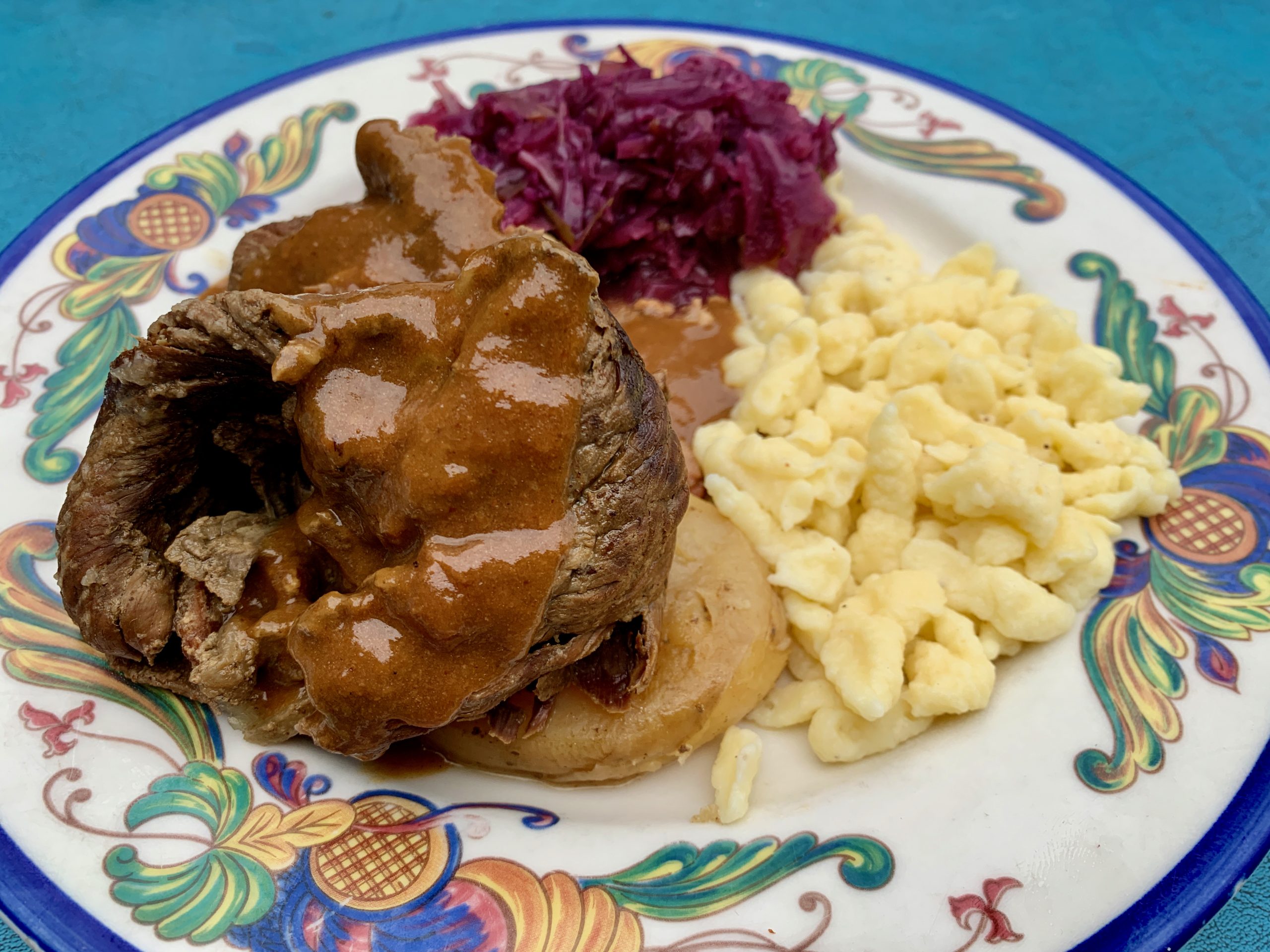 To some of us of a certain age and generation, the term “grandma’s food” evokes emotionally-arousing childhood memories of the foods our grandmothers would prepare. That’s especially true for those of us who no longer have those heaven-sent treasures.  Food was just one of the many ways grandma showed how much she loved her family.  Memories of grandma’s cooking sustain us and bring a flood of warm, fuzzy, happy memories to us–powerful memories that touch our senses of taste, touch, smell.  For the sentimental among us, “grandma’s food” summons the sense of love and happy familiarity in our hearts.

For restaurateur Thomas Hauck, the term “grandma’s food” also represents how German food is perceived by an American dining public more inclined to chase the shiny new culinary trend.  In a 2018 interview with the Washington Post for an an article titled “How Changing Tastes are Killing German Restaurants,” Hauck lamented the closure of his venerable German restaurant in Milwaukee, Wisconsin.  “It’s a German restaurant that’s 114 years old,” Hauck said. “It’s not what the trend is; it’s just not.”

Despite ranking “high” in familiarity by respondents to Yelp polls, Yelp’s research indicated German food ranked 83rd among 100 restaurant categories in terms of growth. Arnim von Friedeburg, an importer of German foods and the founder of Germanfoods.org believes German food’s decline “reflects the cultural mix of this country toward more Latin American, Asian and African American culture, and less of the mainstay Germanic culture that influenced this country for many decades.”

The Washington Post writer also concluded “German food seems stodgy. Not to mention that in the age of Instagram, it suffers from an acute case of brown” and “it’s hearty, heavy and…seems out of place in our current food culture.”  The article suggested German food has to adapt, become more modern…even serve some things that aren’t German at all concluding that German restaurants who continue to turn out plates of sauerbraten will continue to struggle.  Aargh!

Before sounding a death knell for German restaurants, we should all remember that among the traits for which the German people are known are hard work, discipline and efficiency.  While others are quick to give up, “German people spend their time thinking quite practically about how a problem should be solved.”  Look for enterprising, entrepreneurial German restaurateurs to figure out how best to win over a fickle dining public and to reclaim a lofty spot on the pantheon of the world’s great cuisines.  One restaurant in downtown Glendale, Arizona appears to have done just that.

What’s remarkable about the success of Haus Murphy’s, a beloved Glendale institution, is that it hasn’t changed during the quarter-century in which it’s been serving the Phoenix area.  It hasn’t bowed to contemporary trends or faddish fusions.  It’s held fast to time-honored tradition.  Maybe what that says about the patrons who frequent Haus Murphy and those of us who come from afar to seek it out is that some of us like our German food the way we’ve always enjoyed it.  That’s the only way Haus Murphy knows how to do it and for that we’re grateful.

We’re grateful for all the stereotypical trappings of German restaurants–the authentic German cuisine we crave, of course, but also the polka playing in the background, the biergarten which accommodates dozens of thirsty patrons, the Haus Oompah band which plays during Friday and Saturday dinner hours, the unfurled flags of European nations flying overhead; the dark, wood-accented bar area.  We’re grateful for the “grandma’s food.”  Our debonaire dachshund, The Dude is grateful for the fur-baby friendly patio preceded by a gate festooned by iron figures of multi-colored dachshunds.  Haus Murphy’s is family-friendly restaurant in which everything is made fresh to order.

Haus Murphy’s appeared in a March, 2009 episode of Diner’s, Drive-Ins and Dives titled “Family Favorites.”  Ten years later, host Guy Fieri took another walk down memory lane to catch up with the restaurant on “Triple D Nation.” The spike-coiffed star just can’t get enough of Chef Brett Hoffmann’s traditional Bavarian dishes and old-world quality.  After our inaugural visit, we hope it won’t take us another ten years to return to Haus Murphy’s, a German restaurant so good it continues to thrive against contemporary trends.

Haus Murphy offers a cup of the chef’s soup of the day for the inflation-busting, unheard-of price of ninety-five cents.  You read that correctly.  Not even a dollar.  Our visit coincided with what our server confided was one of the chef’s best, a bean and bacon soup.  It’s on the thin side, but has a nice balance of sweet and savory flavors with a creamy bean broth and small chunks of unctuous, meaty bacon.

One of the most memorable episodes in the third season of Seinfeld made the line “these pretzels are making me thirsty” one of the first pop-culture lines to emerge from the show, a line the New York Post listed as “one of “Seinfeld’s 25 greatest contributions to the English language.”  Haus Murphy’s Giant Bavarian Pretzel didn’t make us thirsty, but did make us determined to return for another one soon.  The ten-ounce salted Oktoberfest pretzel served with butter and spicy mustard (and a side of Haus cheese spread for a pittance more) makes other pretzels pale in comparison.  And that spicy mustard will make your eyes water.  This is how pretzels should be made!

Comedian Dave Barry once quipped “Eating in Germany is easy because there is basically one kind of food, called the wurst.”  Though it may be perceived that Barry’s pun was a thinly-veiled expression of his opinion of German food,  most recognize it as a play on words for the German term for “sausage.”  Tasteatlas describes German wurst as  “not merely a part of German cuisine, but a key component of German national heritage. It incorporates more than 1500 different wurst varieties and includes not only sausages, but any type of smoked, cured, or preserved meat. The sausages can be divided into four categories: raw, cooked or parboiled, boiled, and the special ham category, divided into smoked, cooked, or dried ham.”

Contrary to Barry’s quip, German food is much more varied and interesting than just sausages.  Among our very favorite non-sausage German entrees is rouladen, a traditional beef roll braised in a flavorful mixture of wine and vegetable or meat broth stuffed with a variety of ingredients and topped by a creamy sauce or gravy.   Haus Murphy’s version is filled with pickles, carrots and onions topped with a velvety, earthy brown gravy and served with red cabbage and the Haus Spätzle.  The thinly sliced beef, rolled up loosely not like a taught bail of hay, cuts easily with but a press of the fork.  It’s homey and filling, two of the “grandma’s food” qualities today’s diners apparently eschew.  Not us!  We could happily enjoy rouladen like this every day.

The Haus Spätzle is magnificent accompaniment, a pasta which translates literally to “little sparrow,” a name derived from the shape of the pasta when hand-made. Spätzle is one of the most beloved of all German foods, some would say is Germany’s answer to Italy’s pasta.  Although sometimes served with a mushroom-based sauce, Haus Murphy’s version was relatively unadorned with just a bit of butter.  German red cabbage is another staple of German cooking, a sweet and sour dish that not only provides a refreshing contrast in flavors, but a vibrant pop of color.  German red cabbage will make a convert out of anyone who only thinks they hate cabbage.

During his 2015 visit to Cologne in Germany, renowned celebrity chef, master raconteur and social activist  Anthony Bourdain described schnitzel as “surfboard-sized slabs of veal and pork filled with many wonderful things, dredged in breadcrumbs and fried in magical, magical beef fat. Now that’s a Carnival I can get behind.”  Why then would a franchise fast food hot dog place name itself Weinerschnitzel? Wiener doesn’t mean “hot dog;” it means “from Vienna” while, as Bourdain explained, “schnitzel” is thin, breaded, fried cutlet traditionally made from veal.  The name Weinerschnitzel has everything to do with a name that would stick in people’s minds and nothing to do with schnitzel.  That’s it for Gil’s Schnitzel 101.

There are many variations of schnitzel and I love them all, but my favorite version originated not in Germany, but in neighboring Switzerland.  I’m not the only person ensnared by the deliciousness of paprika schnitzel. Haus Murphy’s paprika schnitzel was named one of Phoenix New Times “100 favorite dishes” in 2010.  Constructed from a pounded, nearly half-inch thick slice of pork loin fried to a golden-brown sheen, the schnitzel is topped with a tomato-based sauce seasoned with paprika and infused with the flavors of bacon and onions.  It took restraint not to lap up the sauce first then ask for more.  The schnitzel itself is moist and tender, easy to cut into with a fork and as delicious as my memories told me it would be.  Served with your choice of fries or German potatoes  (the only real choice), it’s reason enough for German restaurants to thrive.

You won’t find German chocolate cake on Haus Murphy’s dessert menu–or for that matter on the menu of most German restaurants.  (German chocolate cake is actually an American creation named for Samuel German, an English American baker who worked for Baker’s Chocolate Company.)  What you will find is something much better, what you might think is a whimsical melding of seemingly disparate ingredients.   The sauerkraut chocolate cake is neither whimsical nor is the convergence of its named ingredients disparate in any way.  Our server challenged us to detect even a hint of sauerkraut, offering to pay for our dessert if we could prove its existence.  We could not.  The sauerkraut is mixed into the batter not to infuse it with a sour flavor, but to impart moistness.  Job well done.  This is one of the most delicious chocolate cakes we’ve enjoyed in a long time.