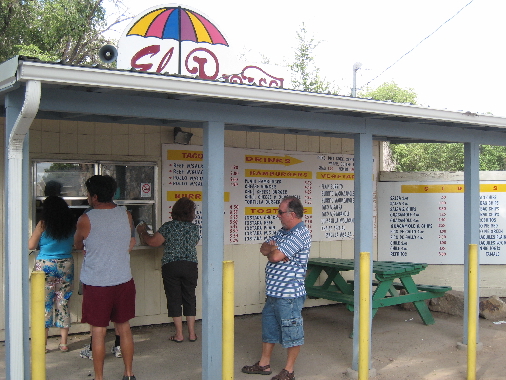 If you were in a hurry, driving through Española on a hot summer day in the early 1980s might have raised the diastolic level (the lower number) of your blood pressure to the level of the temperature gauge. That’s because on Sunday afternoons, Española’s main thoroughfares were the domain of the lowriders, elaborately painted late-model cars (many with intricate religious murals on the hood) whose suspension is replaced with hydraulic cylinders to allow the car to be drastically lowered when parked and raised back up for travel.

Española etiquette dictated that no one, not even the law, interfered with the low-and-slow (sounds like barbecue) pace these sparkling cars set as they hugged the pavement on both lanes for the entire length and breadth of the city limits. The lowered late-model cars with their custom paint jobs, tiny steering wheels and chrome wheels were in no hurry; attracting attention was a major aim of lowriding. As a result, it might take an hour or more to drive through Española. Because of its tradition of highlighting the cars as part of local culture and the high number of lowriders per capita, the city earned the sobriquet of the “lowrider capital of the world.”

Although the Sunday parade of “bajitos” cruising Espanola’s streets isn’t quite as prevalent as it once was, no one in the world appreciates fine cars as much as the good folks in Española. Many of those fine cars still drive slowly as they congregate at essential city landmarks such as El Parasol, a “taco stand” adjacent to the world-famous El Paragua restaurant. They drive slowly in hopes that a parking spot will soon be vacated and they can take its place under the towering alamos next to the restaurant. Once the car is parked, it’s but a short walk to El Parasol where patrons queue up sometimes ten deep or more for excellent New Mexican cuisine.

El Parasol (the umbrella) doesn’t just handle El Paragua’s diner overflow. It’s become a dining destination in its own right. El Parasol became so successful in Española that two other El Parasol restaurants have since been launched, one in Pojoaque and one in Santa Fe.  Similar to its elder brethren, the Pojoaque restaurant has a menu posted on its exterior wall. It also has a pick-up window, but there is no intercom in which to place a take-out order. All actual ordering and pick-up is done inside the restaurant.

With apologies to Sugar’s BBQ & Burgers and El Farolito, El Parasol just might serve up the best green chile cheeseburger in Rio Arriba county and with the addition of the Pojoaque and Santa Fe restaurants, one of the very best in Santa Fe county. The ingredients–lettuce, tomato, pickle, mustard and green chile–may seem pretty standard, but when crafted in either the tiny wooden hut in Española or the more conventional stucco restaurant in Pojoaque, those burgers meld into an explosion of taste. The green chile zings with piquant flavor, the hand-formed beef patty is thick and juicy (even better if you order a double-meat green chile cheeseburger) and the entire creation is piled high–just the way New Mexicans love it. Burgerphiles even have the option of a burger dressed with guacamole, bacon and green chile–three great tastes that taste even better together. This is a two-fisted burger, but not always a multi-napkin affair because the beef patty is usually fairly well done.

El Parasol is also renowned for its quesadillas, tacos, burritos, tamales and even arroz con pollo (a rice and chicken soup) and menudo. This is all Norteño food, the type of which Northern New Mexicans of my generation grew up with. You can’t discuss the cuisine of the state’s northern half without mentioning chicharonnes burrito. El Parasol’s which features bite-sized crackling pork that seems tailor-made for the restaurant’s savory green chile and its fruity-piquant bite.

If tacos are more your style and you also crave variety, the Ana Maria Combinacion plate comes with a crisp shelled shredded-chicken taco, a crisp shelled shredded-beef taco and a soft sirloin taco with guacamole. The scintillating four-time James Beard award-winning author and New Mexico gem Cheryl Alters Jamison loves the chicken-guacamole tacos. When she recommends something, you can take it to the bank. These are some of the very best tacos you’ll find anywhere. The chicken is moist and delicious while the guacamole is creamy and rich. It’s a marriage made inside a crisp fried taco shell.

While an umbrella may shield you from the hot sun or a rare New Mexico downpour, El Parasol will shield you from dreary food. It is an Española treasure every bit as alluring as the lowrider culture.