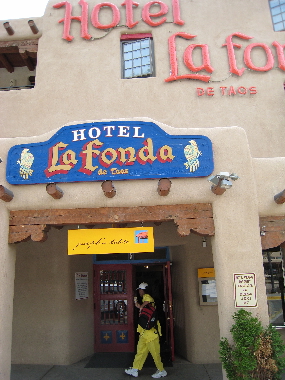 When chef and owner Joseph Wrede launched Joseph’s Table several years ago in Ranchos De Taos,dining patrons and pedantic critics alike were ready to beatify him (a culinary Saint Joseph). In 2000, Food & Wine magazine named him one of the top ten chefs in America, extolling his use of locally grown organic produce in “surprising, sensual ways.” The London Times called him “the voice of modern American cuisine.” Even Food Network luminary Bobby Flay came calling during a visit to Taos. On June 28, 2002, Wrede closed his restaurant to contemplate the lucrative lure of a corporate chef position. The Taos culinary world breathed a collective sigh of relief when he launched his new restaurant in December, 2003.

Housed in the historic La Fonda Hotel, his new dining room is artistically inspired and bathed in vivid colors on which enormous hand-painted tulips and butterflies crafted by his wife provide a whimsical refrain. Flowing, elegant tapestries reminiscent of a Sultan’s tent titivate the walls. Along the back wall are several semi-private chambers the wait staff refer to as “love shacks.” As artistic as the ambience is, it is the congruence of the chef’s menu items that are the true masterpieces–at least the items on the frequently-changing dinner menu.

Perhaps engaging in his own “iron chef” challenge of preparing seven distinct menu items from one ingredient, chef Wrede’s “seven way lucky duck” dinner entree includes duck breast (with just enough fat for flavor), broth, confit, chicharrones, mousse, aspic and foie gras with corn crème brulee. With its citrus influence, the duck broth makes the other items sing. Even the foie gras, the preference for which is generally an acquired taste, is wonderful. The crème brulee is a sweet piece of heaven, albeit served in a small ramekin.

Another dinner entree nonpareil is Wrede’s American steak au Poivre, a peppercorn crusted organic maverick beef tenderloin on smashed potatoes with Madiera mix mushroom sauce. With the characteristic tenderness of an excellent slab of beef, the steak melded complementary flavors that prove more than palate pleasing. The smashed potatoes are a creamy accompaniment.

Our inaugural lunch experience at Joseph’s Table was as disappointing as our first dinner venture was memorable. While I rated our dinner “24” (placing it among my highest rated restaurants in New Mexico), our lunch meal warranted perhaps a rating of “17” and that may be generous. We were alarmed at the disparity.

A listing of local lamb and local green chile stew was too tempting to pass up. Thankfully it isn’t a good representative of local organic cuisine. The “green chile stew” was more akin to a vegetable stew with potatoes, carrots and celery with nary a piece of lamb. Worse, it was served warm with a green chile as piquant as a bell pepper (zero on the Scoville scale). Two pieces of sweet and delicious roasted cornbread were this appetizer’s saving grace.

A salad fashioned with organic mixed greens, five nuts, Manchego (a wonderfully sharp cheese), apples and Tarragon vinaigrette exemplifies the creativity for which Wrede is renown. Alas, as magnificent as this leafy concoction was, it was almost too small to split as we often do with gourmet salads. The sweetness and tartness of the apple contrasted wonderfully with the sharpness of the Manchego while the dressing pulled it all together oh so well. We surmised that the “five nuts” referred to on the menu celebrated the total number of nuts in the entire salad because the only nut we could find was pistachio–and there wasn’t many of those.

An entree of organic turkey enchiladas with white Cheddar and homemade tortillas was a poor example of an entree made so well throughout Taos county. Crusty homemade flour tortillas proved a poor base for stacked enchiladas drowning in a tasteless chile (okay, it may have had a little bite to it). Much better was the grilled pizza with caramelized onions, bacon and Danish gouda. The crust was as thin as traditional Armenian flat bread while the sweet onions worked oh so well with the not too sharp gouda and salty bacon. It was the best item we had during our lunch visit.

Until Joseph’s Table improves its lunch fare, I’m not so sure Chef Wrede warrants beatification. His formidable talent and impeccable reputation demand no less.