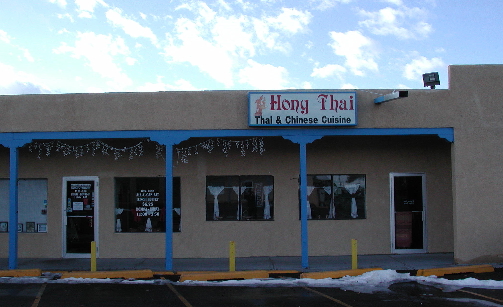 Cloistered in the tiny, nondescript Lujan Plaza shopping center and away from the maddening traffic cavalcade that has become Rio Rancho Boulevard, Hong Thai operated for nearly a year (since April, 2005) before we knew it existed (our first visit was in March, 2006). We thought the shopping center’s southwest corner was still occupied by a mediocre Chinese restaurant. Boy, were we ever in for a treat.

Hong Thai is superior in every way to its predecessor whose claim to fame seemed to be cramming throngs of non-discerning diners into a small space for a mediocre buffet of Americanized Chinese favorites (lots of fried, candied stuff that all tastes the same).

Family-owned and operated, Hong Thai features cuisine from both Thailand and China. Like the previous occupant, it offers a lunch-hour buffet that is heavily patronized and does a booming take-out business.

Having eschewed Chinese buffets (the essence and definition of mediocrity), we may never find out whether or not Hong Thai does a better job appeasing hungry diners than other Chinese buffets in the Albuquerque area, but we do know that its standard menu offerings will assuage the appetites of adventurous diners with a passion for Thai cuisine.

Thai appetizers include Shrimp Tempura, eight pearlescent shrimp deep-fried and served with a tangy sweet-and-sour sauce. At about a dollar per shrimp, it’s not an inexpensive appetizer, but considering the delicate lightness of the tempura batter and the succulent, sea-sweetness of the shrimp, it’s well worth the price.

Satay, the ubiquitous Thai appetizer is a popular favorite. One order consists of five grilled and skewered strips of chicken or beef marinated in a Thai barbecue sauce and served with peanut sauce and a cucumber salad. There was nothing remarkable about Hong Thai’s version which was good, but not a stand-out as far as satay goes.

Several Thai curry dishes adorn the menu. All are offered with your choice of chicken, pork, beef, tofu, shrimp, squid or a seafood combination. The only thing preventing the coconut milk enriched green curry (with bamboo shoots, green beans, squash and basil leaves) from ranking with the best of its genre in Albuquerque was the lack of any real Thai bite. While not at all piquant, it is a very flavorful curry dish with the olfactory arousing properties aficionados love.

With the seafood combination, the green curry includes mussels, squid, shrimp and fish, all of which were perfectly prepared. Having become somewhat accustomed to nearly impossible to masticate, rubbery squid, we were blown away by the texture of squid done right. The seafood was complementary to the curry, offering a slightly briny counterpart to the sweetness of the coconut milk.

It appears most American diners who order soup at Thai restaurants are predisposed to order Tom Ka Gai, an earthy chicken and mushroom soup in a coconut milk, basil, galangal and lemongrass broth. A nice alternative is Po-Thak, a combination seafood soup in a spicy and sour lemongrass broth. Hong Thai’s version is neither overpoweringly spicy or sour, treading a nice balance of both.

If Chinese food is more to your liking, the Lo Mein is a great choice. Soft Chinese noodles are stir-fried in a garlicky sauce and served with your choice of the aforementioned meat, poultry or seafood.

As a dessert offering, there are few items better than mangos and sticky rice in which sweet, glutinous rice serves as a bed for tangy, peeled and sliced mangoes, all of which are topped with rich, sweet coconut milk. When mangoes are in season, there’s no doubt as to why people in India all them the “fruit of the gods.” With a voluptuous, tropical taste, mangoes complement sticky rice and coconut milk wonderfully.