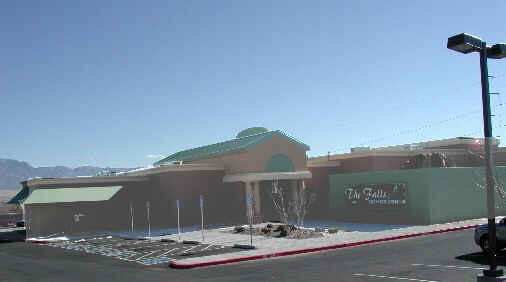 New Mexico has been gilded with incomparable scenic beauty and an abundance of sunshine. Cerulean skies graduate in depth of color the higher above the horizon your eyes climb, interrupted only by velvety smooth red-rock outcrops and snow-capped mountains. Fiery sunsets and brilliant sunrises give the illusion that God just threw a bucket of paint into the sky while processions of wispy cloud formations provide the promise of much needed rain as they sweep past the parched escarpment. A vibrant and diverse topography provides striking contrasts in terrain. It’s easy to focus on the many reasons New Mexico truly earns the sobriquet “the Land of Enchantment.”

“Glass is half empty” folks might argue that New Mexico has been “shortchanged” when it comes to water-based enchantment and would point out that “waterfall” in our blessed state means that the water falls only on occasion and in parsimonious amounts. The rest of us would retort that sometimes less is more and cite as evidence, the volcanically formed and preternaturally beautiful Soda falls in the Jemez River valley.

Sometimes man creates what God didn’t provide. In November, 2006, the Falls Steakhouse launched in a new edifice just about as far northwest as you can go before you’re in Rio Rancho. Situated on the steep slope, the top of which demarks the boundary between the Duke City and the City of Vision, it provides a panoramic view of the Sandia Mountains and at night, of the city lights.  Appropriately named, the restaurant features two manmade waterfalls so that whether you’re indoors or out, the sound of rivulets of water cascading down sheer rock formations will lull you into a state of content relaxation.

An out-of-doors waterfall on a large outdoor patio was crafted from river rock culled from the Las Vegas, New Mexico area (pictured above). It’s 15 feet tall and 51 feet in length.  In comparison, the indoor waterfall is much smaller at 9 feet in height and 25 feet in length. The indoors waterfall employs a fog machine to evoke the feeling of intense cold or heat. Two large salt water aquariums add to the thematic experience, both teeming with exotic tropical fish and live coral.

The Falls Steakhouse is owned by local businessman Fahim Adi who also owns several IHOP restaurants in the city. It is a dramatic departure from IHOP in every way but one—the proximity of tables to one another makes it difficult to hold a private conversation. Still, each seat has a view, whether of the waterfalls or of the city below.

The Falls is also a dramatic departure from Albuquerque’s other steakhouses. The menu showcases Wagyu beef lines, the top of the scale, high-end grade of beef. Wagyu is a breed of cattle genetically predisposed to intense marbling. It produces a high percentage of buttery-tasting, unsaturated fat laden beef. In its most famous rendition, Wagyu beef is known as Kobe Beef when it is raised in the Kobe prefecture of Japan. Wagyu cattle are hand-massaged with sake and are fed a daily diet Homer Simpson would die for that includes large amounts of beer. The result is meat that is extraordinarily tender and extremely expensive. At The Falls, a bone-in Kobe ribeye to share goes for $129.95 while a filet of tenderloin commands $79.95. For most of us, those are special occasion prices.

Fortunately, not everything on The Falls’ menu is exorbitantly priced. In fact, there are many items on the menu within the easy reach of most price-conscious diners. The lunch menu, in particular, features many reasonably priced entrees that although portioned somewhat smaller than dinner menu entrees, will let you feel like a million bucks without having to spend nearly that much.

A dinner menu appetizer you can order at any time is the seafood spinach and artichoke dip (pictured above) fashioned with tender shrimp and bay scallops, cheese, spinach and artichoke then broiled until bubbly. Both the shrimp and scallops are imbued with the complementary briny and sweet tastes inherent only in fresh seafood. This appetizer plate is circumnavigated by ten triangles of warm, tender pita bread onto which you can slather the rich, delicious mélange.

If the price of Kobe beef scares you, but you’re dying to try it, you can do so by ordering The Falls Kobe Burger. You can practically see the richness of the beef on the six-ounce beef patty which practically oozes a buttery taste when prepared at medium or below. Slather on the mustard, ketchup or mayonnaise if you will, but make sure you don’t overpower the subtle beef taste. Oh, and since this is New Mexico, you can order the Kobe Burger with green chili (their spelling, not mine). The burger is accompanied by Texas fries, perhaps the most boring item on the menu.

For a pittance, you can have either a Caesar salad or a dinner salad. The dinner salad is crafted with Romaine lettuce, small tomato cubes, cucumbers and croutons, but you can transform it into something truly special by requesting the bleu cheese dressing with crumbles. The dressing is creamy and redolent with olfactory arousing bleu cheese apportioned generously. I normally ask the wait staff to bring me “as much bleu cheese as you can carry,” but the standard portion will be just fine for most diners.

The Falls’ steaks are hand-selected by executive chef Henry Sanchez and are aged for no less than 30 days. Processed locally in New Mexico, this is excellent beef–even if you don’t order the Kobe.

If you order the New York cut (pictured at right), ask for it to be prepared with salt, pepper and garlic (the real stuff, not powdered) on both sides and the chef will slice thin slivers of garlic and broil them with your steak. It imbues the steak with the unmistakable pungency of garlic that blends superbly with the steak’s inherent sweetness. This is an outstanding steak!

Although starches are a’ la Carte for dinner, a lunch steak entree includes the potato of the day. Pray it will be the scalloped potatoes which are sliced into thin wedges then dredged with a blend of Asiago and Mozzarella cheeses. You may never again asked for a baked potato.

Dessert options are a match for their prandial precursors. The favorite of the wait staff appears to be Bananas Foster which one especially ebullient waitress described as something like you’d want to eat everyday. This isn’t a New Orleans style Bananas Foster. In fact, it’s similar in name only to the popular southern specialty. The Falls’ version features deep-fried slices of banana filled with a rich banana and Bavarian cream mousse then drizzled with confectionary sugar. It is absolutely delicious.

With the audacity or confidence of a winner, the Falls Steakhouse was started with one thought in mind–“to provide a great meal with great ambiance and unparalleled service” in a “real steak and seafood restaurant.” It will certainly compete with its upper-crust brethren, the Gruet Steakhouse and the venerable Ranchers’ Club for the adulation and dollars of well-heeled patrons, but goes one better by providing reasonably priced lunch options for the rest of us.