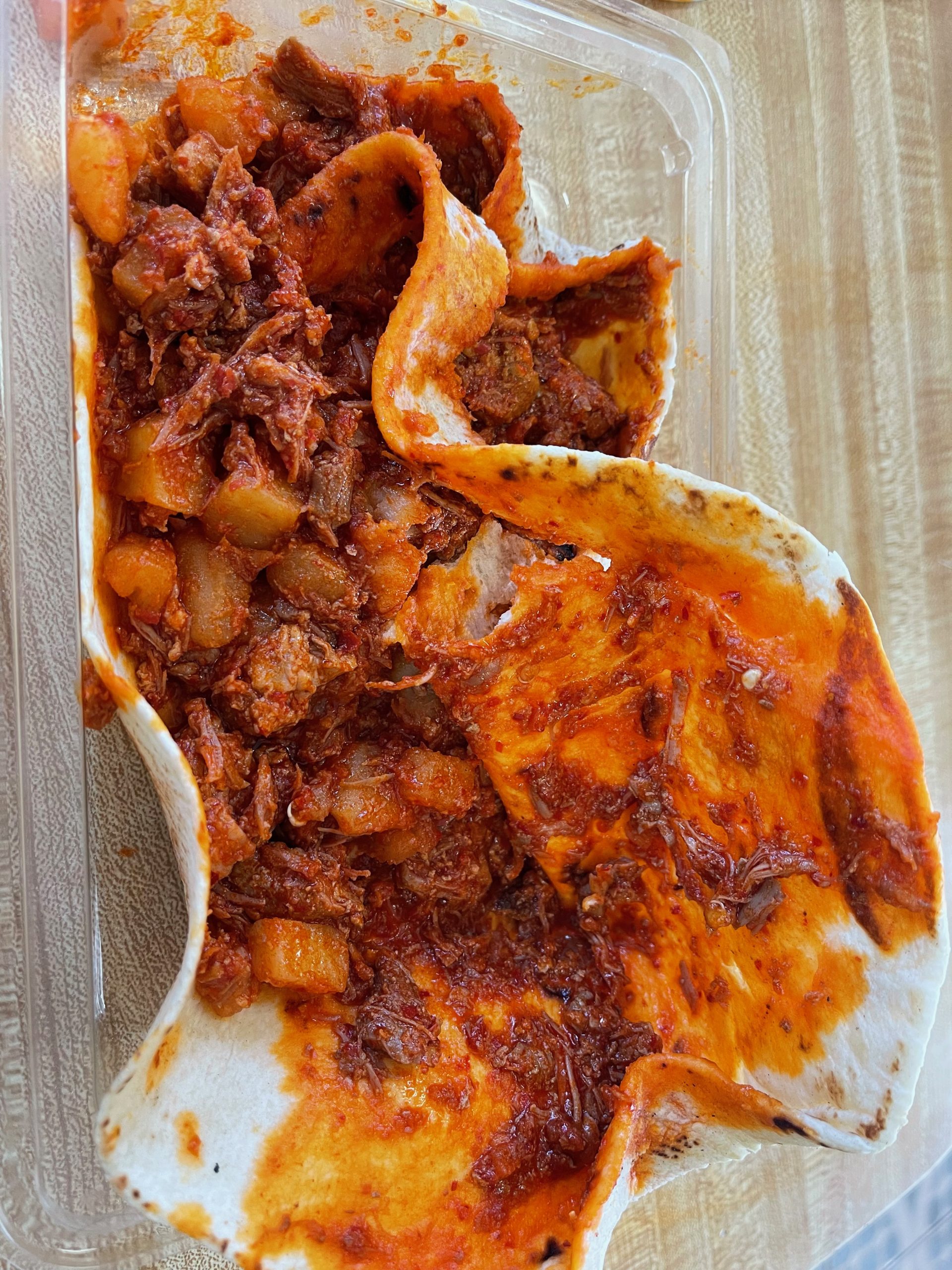 “Over the Mountains of the Moon, down the Valley of the Shadow, ride, boldly ride…if you seek for El Dorado.”
~Edgar Allan Poe

In the 16th century when the Spaniards reached South America, natives regaled them with tales about a tribe with profligate wealth living high in the Andes. According to raconteurs, when a new chieftain ascended to the throne, he was covered in gold dust. Gold and precious jewels were then tossed into a lake to appease a god who lived underwater. The Spaniards called this golden chief “El Dorado” which translates to “the gilded one.” Legends of El Dorado fueled the Spaniards insatiable lust for gold, an effort they pursued for more than two centuries. Though they found great wealth, they never did find El Dorado nor were they ever sated.

Duke City diners don’t have to go far to find El Dorado where treasures untold can be found. Panaderia El Dorado is located at the terminus of Gibson Boulevard where it intersects with Broadway. Essentially where Gibson ends, the Panaderia’s parking lot begins. Long-timers remember this site as having housed everything from Chinese restaurants to failed Mexican restaurants. With more than six years of pleasing its patrons, Panaderia El Dorado has outlived several previous tenants.

While it’s only natural to suspect this humble Panaderia is named for the golden treasures prepared on the old-fashioned Mexican oven, the bakery actually takes its name from the Dorado family: proprietors Daniel, Juan and Roberto. In 2008, the Panaderia was showcased in a community development conference held in Albuquerque as an example of what drive, initiative and a good product can accomplish when given a little opportunity and help with a little start-up capital.

The instant you open the door and step into the venerable edifice, you’re enveloped in a fragrant bouquet of pastry goods wafting toward you. The source of these olfactory-arousing siren’s call is a pastry case jam-packed with pastries and breads of all shapes, colors and descriptions. It’s a veritable treasure trove of gold and jewel-colored deliciousness, so inviting and attractive you might suffer involuntary (and embarrassing) salivation as you contemplate which one (or four) you’ll have.  One caution, however.  When the panaderia opens its doors at 7AM, a throng of hungry patrons rushes in for their favorite pan dulces, donuts, conchas or other baked goods.  During our visit in February, 2022, the entire pastry case had long been wiped out by 1PM when we got there.

These baked treasures are prepared on an horno-like oven you’ll espy as you place your order. It’s an old-fashioned and very traditional Mexican oven, the type of which are used throughout the Land of Montezuma. A long wooden bakery paddle is used to insert and extricate baked goods from the oven. In addition to the wondrous pastries, Panaderia El Dorado bakes bread and dozens of flour tortillas every day–and not the artificially tasting machine-made variety. The griddle-made gems are absolutely delicious.

These tortillas may be purchased by the dozen or you can enjoy them on at a time in the form of behemoth burritos. A small menu on the wall offers six burritos: picadillo, chicharrones, rajas con queso, rojo, verde and almuerzo. At just north of six dollars (as of this writing), they’re much less expensive than most restaurant burritos and better than most. While cumin isn’t used on either the red or green chile, it is used on the pork inside the rojo burrito. The chicharrones aren’t the deep-fried crackling pork nuggets New Mexicans love, but the tripe-like strips served in Mexico. The menu also offers menudo in small or large sizes. Aguas fresca options include horchata and jamaica.

In terms of ambiance, Panaderia El Dorado offers an interesting melange of Catholic iconography and perhaps the city’s largest collection of framed black and white photos and posters of General Francisco “Pancho” Villa. Seating is more functional than it is comfortable. The most uncomfortable aspect of dining at the Panaderia, however, is the stifling heat. If you visit on a sweltering summer day, the lack of air conditioning will certainly be noticeable.

During our inaugural visit, two terms often used in Mexico could be used to describe how my friend Bill Resnik and I ordered. Those two words are machismo and bravado. Assuming such inexpensive burritos would also be small, we ordered two apiece. One burrito would feed a small family, especially if smothered with the chile rojo (red) or chile verde (green). This Panaderia doesn’t scrimp in stuffing its burritos.

24 June 2014: The best bet for meat lovers is the Almuerzo burrito with potatoes, eggs, cheese and your choice of ham, bacon, sausage and chorizo–or better still, enjoy all four meats. Almuerzo, a Spanish term for lunch, is a bit of a misnomer since the four aforementioned meats are just as good during desayuno (breakfast). Your immediate impression is “wow, this huge.” Your next utterance will be “wow, this is good!” The green chile is rather mild, less bite than chile used at most New Mexican restaurants. Thankfully it’s very flavorful with sweet-savory flavorful reminders that chile is more fruit than vegetable. The four meats are plentiful, all perfectly prepared with the characteristic smokiness of bacon taking center stage, but it may have been the potatoes with which we were most impressed. These are not blandish potatoes which have sat around for a while before being served. They have a fresh flavor with the occasional crispy caramelized bits.

24 June 2014: Another burrito which surprised us is the burrito with rajas and queso. Rajas translates to “strips,” but are actually sliced Poblano peppers. Queso, of course, is cheese. Poblano peppers warrant 1,500 – 2,500 units on the Scoville chile pepper heat index which means they’re actually more piquant than New Mexico and Big Jim chiles. It isn’t piquancy you’ll notice, but how nicely roasted and sweet they are. They’re also surprisingly delicious as in “can’t wait til the next bite” delicious. The queso is a Mexican queso blanco (white cheese) which proves a perfect complement to the chile. This is a burrito you probably shouldn’t have smothered because the roasted Poblano flavor profile needs no amelioration.

13 February 2022: It was almost if they knew my Kim would be visiting on a Sunday afternoon when the special burrito of the day was a carne adovada burrito.  No matter what’s on the menu, it’ll be carne adovada that’s on her plate.  As with other burritos on the menu, the carne adovada burrito also includes refried beans and papitas though you can abstain from one or both.  The slow-roasted pork marinated in a mixture of red chiles and such spices as Mexican oregano is tender as a sigh when you first espy the pastry case.  The chile isn’t especially piquant, but that’s about par for carne adovada, one of the few New Mexican dishes in which heat isn’t necessary.

13 February 2022: If Tuesday is designated Taco Tuesday, what food is associated with Sunday?  Judging from the cavalcade of diners ordering large bowls of menudo, you’d have to assume the Lord’s Day is menudo day.  Either that or most diners are seeking a cure for la cruda, the headaches, dizzying nausea and general malaise of a hangover.  Large and small bowls are served with bolillos, that crusty, cloud-soft Mexican bread that’s oblong in shape and a perfect canvass for sandwiches.  Although we arrived too late to avail ourselves of the huge selection of pan dulce and other wondrous pastries, Panaderia El Dorado offers (in limited quantities) small bagfuls of pastries such as cinnamon rolls and conchas.  They may have been day old, but didn’t taste that way.

The pastry case is never far from view or out of mind so even those of you with iron willpower will succumb to its lure. Bring a friend and share whatever pastries you decide on. Frankly, every aspect of Panaderia El Dorado is meant to be shared. It’s a great place to share with friends and family who have a passion for wonderful Mexican pastries and some of the very best burritos in Albuquerque.