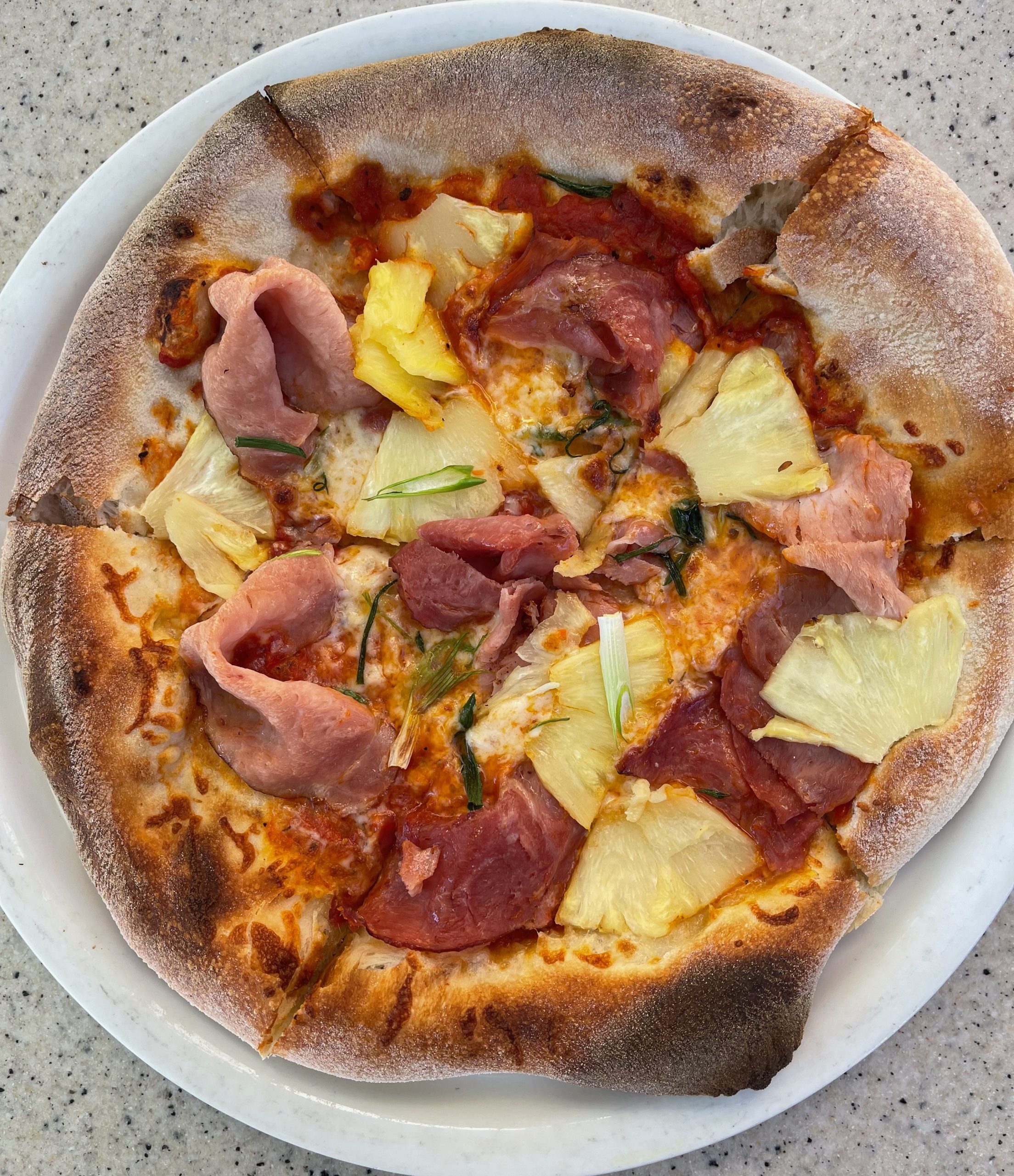 7 September 2015:  The appetizer which first caught our eye bore the name tortilla spring rolls. What a great idea! Why have we limited ourselves to boring tortilla roll-ups, tortilla pinwheels stuffed with cream cheese and sundry ingredients? There are three types of tortilla spring rolls, the most enticing of which was the Thai Chicken Spring Rolls, flour tortillas sprinkled with herbs and baked in the hearth oven stuffed with bean sprouts, scallions, carrots, cilantro and mozzarella served with an addictive peanut sauce. The peanut sauce is the topper, both literally and figuratively. As good as peanut sauce at many Thai restaurants, it’s the perfect dip for an otherwise very good starter, elevating it into an excellent introduction to CPK.

7 September 2015: CPK’s pizzas are categorized as “original hand-tossed” and “crispy thin crust.” Though there are plenty of traditional toppings, we opted for pies topped as no other pizzas we’ve seen in New Mexico are topped. These are true California pizzas, constructed from imagination and creativity (not that the Land of Enchantment’s pizzaiolo don’t have these qualities). The first was a Pear and Gorgonzola pie (Bosc pears, sweet caramelized onions and hazelnuts topped with chilled field greens in Gorgonzola ranch dressing). Wow! This salad on a pizza is a winner thanks largely to the creamy, sharp Gorgonzola ranch which penetrated through the greens onto the thin crusted pie. The Bosc pears are sliced thin and are caramelized by the baking process, rendering them even sweeter, a nice contrast to the Gorgonzola.

7 September 2015: Perhaps even more creative is a Jamaican Jerk Chicken pizza (spicy-sweet Caribbean sauce, authentic Jamaican spices, Nueske’s applewood smoked bacon, red onions and bell peppers). Make sure to ask for pineapples (from the fruit, not a can) for a tangy-sweet complement to the assertively wonderful ingredients that come standard with this beauteous pizza. Though you might be tempted to tell your server “Jamaican me crazy with this pizza,” your servers have all heard that before. Nueske’s applewood bacon is porcine perfection, as good a bacon as you’ll find anywhere.

19 February 2022: Not long after having shared our mutual disdain for chain restaurants with Erik, an Apple Genius Bar technician from California, my Kim decided we should have lunch at nearby California Pizza Kitchen.  Once again, my Faustian bargain came back to haunt me.  Erik, if you’re reading this, please understand I was under severe duress and great pressure.  A lesser man would have crumbled even more quickly than I did.  Thankfully, as far as chain restaurants go, California Pizza kitchen isn’t half bad.

19 February 2022:  Besides, how can you not like a restaurant that serves a pretty mean Thai Crunch Salad (crisp veggies and fresh cilantro with chicken and the crunch of peanuts, wontons and rice sticks. Served with Thai peanut dressing. Also available with fresh avocado.)?  Our kind server split this salad for us and still neither of us could finish it.  Talk about a substantial salad.  Talk about a delicious salad.  The genius is tossing all those beautiful, mostly healthy ingredients with a Thai peanut dressing that’s very well balanced between sweet and savory and between creamy and thin.  This is a salad we’ll be duplicating at home.

19 February 2022: Though the end of summer meant the inevitable return to school, my brothers and sisters found consolation in roasting ears of corn we had raised and nurtured from seed to harvest.  This special time was the sole occasion in which we also used our horno to make chicos, slow-roasted corn which we would dry and reconstitute during the winter when we were craving the sweet flavor of corn.  Back then we had no idea about Mexican street corn.  To us, roasted corn was absolutely delicious just the way it was.

Today Mexican street corn has transcended culinary boundaries and borders.  You can find it in fine-dining restaurants, roadside stands…and in California Pizza Kitchen.  CPK’s Mexican street corn (roasted with smoked paprika, feta and Parmesan served with fresh cilantro, lime and housemade ranchito sauce) didn’t exactly remind me of horno-roasted corn, but it was quite good.  Most memorable is the discernible char on virtually every niblet of corn.  That char imparted a sharpness that paired very well with the smokiness of the paprika and the tanginess of the feta.  Even my persnickety grandmother would have enjoyed this Mexican street corn.

19 February 2022: Several years ago, the President of Iceland declared he was “fundamentally opposed” to pineapple on pizzas.  Not wise enough to leave well enough alone, he further stated that if he could, he would ban the tropical fruit as a pizza topping.  Not surprisingly, Twitter and half the world’s online media became rabid at his declaration.  Wisely,he issued a “retraction” indicating “I would not want to hold this position if I could pass laws forbidding that which I don’t like. I would not want to live in such a country. For pizzas, I recommend seafood.”

Neither my Kim nor I are fundamentally opposed to pineapple on pizza.  It may not be what comes to mind when asked what our favorite pizza toppings are, but we would never kick a “Hawaiian pizza” off our table–especially when it’s as good as California Pizza Kitchen’s.  What makes CPK’s Hawaiian pizza (fresh pineapple, applewood smoked ham and slivered scallions) a star is its painfully thin crust.  It’s so thin Food Network star Guy Fieri might describe it as having only one side.  Somehow it manages to support the weight of a generous amount of pineapple and smoked ham.  It’s six slices of pizza you wouldn’t want to share with the President of Iceland, but you might enjoy sharing it with someone you love.