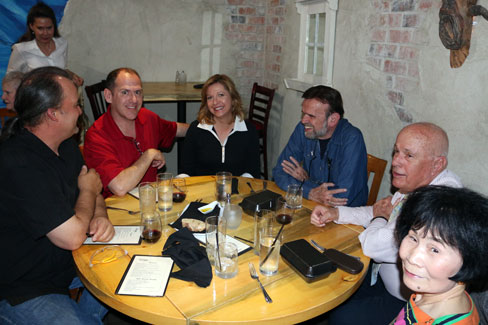 “People who love to eat are always the best people.”
– Julia Child

When Friends of Gil (FOG) get together, good food happens. So do good times and great conversation among some of the most passionate gastronomes in the Duke City area. El Norteño was the site of the most recent FOG dinner shared by nineteen. Guests included five of the ten most prolific commentators on Gil’s Thrilling (And Filling) Blog: Bob of the Village of Los Ranchos, Bruce Schor (with Lady Grayce), Jim Millington (with Janet, the Child Bride), Larry McGoldrick (with the pulchritudinous Chase girls, Barbara and Linda) and John Lucas (with fabulous Kay).

We were also graced with the presence of FOG newcomers Sarah and Rolk Dolk. No strangers to the hospitality industry, Sarah and Rol own and operate the Adobe Nido Bed and Breakfast which is very close to Old Town shopping, museums and downtown night life. Joe and Kazzie Guzzardi, the much loved proprietors of Joe’s Pasta House in Rio Rancho joined just as we were about to order dessert. As far as we know, the infamous Suzie Queue was not in attendance.

While some of the FOG hadn’t ever dined at El Norteño, others of us visit frequently. As one of the most long-lived and beloved Mexican restaurants in the Duke City, El Norteño has been a perennial winner of “Best Mexican” restaurant honors in various publications. Instead of a fixed price meal as we’ve had in previous FOG dinners, guests ordered from the menu. Larry McGoldrick, the professor with the perspicacious palate not only ordered the most tongue-twisting dish on the menu (Huachinango a la Veracruzana), he was able to pronounce it like a native.

Our thanks to Mary Ann Spencer for organizing a very fun and enjoyable event. The stunning Shawne volunteered to organize FOG IV which is tentatively slated for November. We hope many more of you are able to join us.