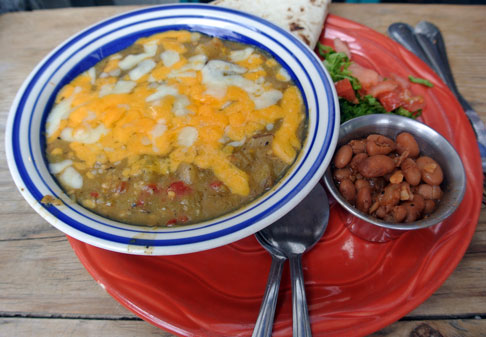 There’s a rather ominous sign on the base of the Taos Ski Valley. In bold red uppercase print, the sign reads “DON’T PANIC!,” a preface for somewhat more reassuring text: “YOU’RE LOOKING AT ONLY 1/30 OF TAOS SKI VALLEY. WE HAVE MANY EASY RUNS TOO!” To novice skiers, the steepness of the ski runs visible from the base may as well be the “I’d turn back if I were you” sign Dorothy and her friends encountered when they entered the Haunted Forest on the way to the castle of the Wicked Witch of the West. No doubt the less skilled schussers turn tail like the Cowardly Lion and head for flatter topography.

There’s another boldface type warning at another Taos Ski Valley landmark. This one is for the meek of taste bud and gastrointestinal system. The menu at the Stray Dog Cantina warns “Caution: Our chile is not for amateurs. It’s extra tasty, but it can be spicy – it is serious chile.” It’s obvious this warning is intended primarily for out-of-state visitors unaccustomed to their food biting back. For citizens of the Land of Enchantment, such a warning is akin to a red flag being waved at a charging bull. We see it as a challenge, another test for our manliness (being the more mature and intelligent gender, women don’t fall for such challenges) and an opportunity to show off our asbestos-lined constitutions. Not to mention some of us really dig this stuff when it’s packing heat. Then there are others who believe pain is a flavor.</span >

With a name such as Stray Dog Cantina, it’s only fitting that this long-time Taos Ski Valley apres-ski favorite is one of only two pet-friendly restaurants in the Taos area. The genesis of the unique name seems to be consigned to history and, in fact, some regulars still refer to it as “Tim’s Place” while throughout the internet, references to “Tim’s Stray Dog Cantina” abound. Tim would be co-founder Tim Harter who died in an avalanche while backcountry skiing beyond Taos Ski Valley boundaries in 1996.

While the “Tim’s” portion of the name was removed in 2009 when Harter’s family sold the cantina, at least “Stray Dog” portion seems a permanent fixture. Fittingly, the women’s softball team sponsored by the Stray Dog is called the “Stray Bitches.” Their trophies are on display on the first floor which is part dining room (complete with picnic tables and wooden benches) and all bar. On one second story wall, you’ll find a painting of New Mexico’s most spectacular mountain, The Jicarita, by the delightful Leigh Gusterson. The Jicarita which backdrops Peñasco (pandering to my hometown) is about 35 miles from the Taos Ski Valley.

Save for closing for a few weeks in spring after ski season, The Stray Dog is open year-round. The vibe is certainly different in the winter when pristine white powder blankets the area. Our inaugural visit, about a month before the autumnal equinox, was a weekend escape from the heat of the Duke City. It was a good 25 degrees cooler at the Taos Ski Valley, prompting some visitors to don attire more appropriate for the winter. The pet-friendly patio hugs the Stray Dog and provides magnificent views of the towering evergreens. The al fresco experience is heightened by the sound of water cascading along a babbling brook directly beneath the wooden planks of the patio.

Open for breakfast, lunch and dinner, The Stray Dog offers an interesting menu replete with familiar New Mexican favorites and some unique creations heretofore unseen. Red chile is sourced from Chimayo. It’s a vegetarian chile ameliorated only by garlic and fresh vegetables. All beef sold on the premises comes from New Mexico. Among the more interesting dishes on the menu is the Hawaiian inspired Local Loco which is loosely patterned after the Aloha State’s “Loco Moco,” a dish many Spanish-speaking New Mexicans might find off-putting in that “moco” translates from Spanish to “mucus.” You get the feeling the creator of Stray Dog’s menu knew this.

Save for a unique starter named the “Mexican Suzie Sushi” (blue corn-battered chile relleno wrapped in a tortilla, cut like sushi and served on red or green chile), the appetizers are similar to those you’d find at many New Mexican restaurants. Because the salsa was laced with hemlock…er, cumin, we opted out of anything on the appetizers menu and shared a Frito pie (a bowl of Frito’s corn chips topped with beans, red chile, cheese, onion, lettuce, chopped jalapeños and sour cream). It was our first opportunity to sample the chile about which we were warned. As surmised, that warning wasn’t intended for red (chile) blooded New Mexicans. The only heat discernible came from the chopped jalapeños. The purity and deliciousness of the chile made up for its lack of piquancy. It’s a very tasty chile, the highlight of an otherwise good Frito pie.

Though the Local Loco beckoned, as one of the quadrumvirate who put the New Mexico Green Chile Cheeseburger Trail together, it is always my patriotic duty to order a green chile cheeseburger, by far the most popular item on the menu (even among tourists). The green chile cheeseburger is constructed with Angus beef which is topped with green chile blanketed by melted Cheddar cheese. Both mayo and mustard are slathered on the top bun with pickles, onions and tomatoes on the side. The hand-formed beef patty doesn’t quite cover the bun, but what there is of it is terrific, reminiscent of a grilled steak and what it lacks in circumference is more than made up for in thickness and deliciousness. As with the red chile on the Frito pie, the green chile didn’t pack much of a punch.

In order to restore homeostasis under extreme conditions (sixty degrees with a stiff breeze), New Mexicans crave the salubrious elixir of green chile stew. We crave it because it nurtures us with two types of heat–the heart-warming heat of cold-defeating temperature and the heat of piquancy. The Stray Dog’s version must be very popular at winter, primarily because it helps offset the cold (and, who knows, visitors may even discern a piquant bite). For us, the green chile, while flavorful, was rather insipid, lacking the second type of heat New Mexicans crave. It’s not a bad green chile stew, but we would have enjoyed it more had it brought sweat to our brows and blisters to our tongues. Available with chicken or pork (shredded), the green chile stew is cloaked in white and yellow Cheddar.

While the warning about the chile was wholly unnecessary for us, those steep mountain trails almost make me thankful that knees wrecked from playing football can no longer schuss down precipitous mountain trails. Whether or not you ski, the Stray Dog Cantina is a great place for relaxing in the company of your four-legged children.