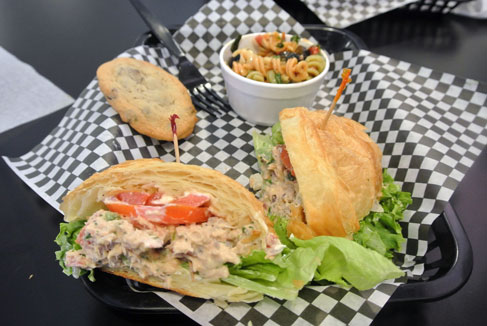 Galdamez and Albertine. If you saw those names on a building, you might expect to see them appended with “Attorneys at Law.” That’s especially true if the building is in the area immediately north of Albuquerque’s burgeoning downtown district, an area teeming with lawyers’ offices and bail bondsmen (is bondspeople the politically correct term?). Instead, the building in which Oscar Galdamez and Bruce Albertine ply their own noble trade houses a diminutive and charming dining establishment, Roma Bakery and Deli. You won’t see their named displayed in any officious self-aggrandizement manner, but it’s a good bet you’ll get to know their names soon enough.

That’s because frequent return visits are imminent, especially for hungry patrons lucky enough to live or work close to the restaurant. The Roma Bakery and Deli launched in the summer of 2006 and despite seating for only about 40 patrons, this comfy, cozy diner has established itself as a very popular dining destination. Visit during the lunch hour and you’ll find yourself standing in a line that extends from the entrance to the counter at which you place your order. There is no menu overhead, but most of the patrons don’t seem to need it. That familiarity and the banter they exchange with Oscar and the genial staff means they’re regulars.

While delicious, made-from-scratch food is the big draw, it doesn’t hurt any that Oscar and Bruce are as outgoing as any restaurateurs in town. Oscar, who does the cooking and baking, is from El Salvador but don’t expect any pupusas on the menu any time soon. He frequents the Pupuseria Y Restaurante Salvadoreño for his pupuseria fix. His restaurant launched four months after the popular pupuseria.

Finding a place to sit during the weekday lunch hour is a challenge so a lot of people call in to-go orders, sometimes for dozens of sandwiches. An early lunch (or late breakfast), say at about 10 o’clock might be your best bet and if you’re not in a hurry, make sure to imbibe the ambiance. The first thing you see when you walk in is a pastry case under glass in which colorful, delicious looking Central American pastries and cookies are put on display. If you do succumb to the tasty temptations, you’ll be heartened to learn that these pastries don’t derive all their flavor from sugar as do many of their American counterparts.

Instead, these goodies showcase other distinct tastes. The prominent flavors on the orange raisin scones, for example, are the citrusy freshness of oranges and the sunny sweetness of sultana (golden raisins). The coconut butter cookies are indeed buttery and studded with smoked coconut flakes (not unlike coconut macaroons which bear a surprising similarity in appearance), but I digress…

The walls are festooned with giclee prints of original Julie Maas pastels, all very reasonably priced. Interspersed among the colorful giclees are paintings of automotive designed concepts from the 1960s, all painted by Miller Johnson, a retired automobile designer. The building which houses restaurant still has old-fashioned windows which open and close with a crank handle. It’s one of the deli’s charms, along with the worldly eclectic music which plays mostly upbeat and concordant tunes continuously.

The menu features five deli-style sandwiches and two croissant sandwiches made on all-butter croissants made in-house. Four salad options, a soup of the day (on Tuesdays, it’s Baja Lobster Bisque, a bisque spiced up with sauteed jalapeno and tomatoes with fresh cilantro tossed in) and two breakfast entrees (breakfast burrito and breakfast croissant) are also available, albeit served only until 10:30AM. A chocolate chip cookie is served with every sandwich. When you bite down on this cookie, you might forever swear off anything baked by an elf. The chocolate practically oozes out with each heavenly bite.

15 March 2007: Perhaps the most popular sandwich on the menu is the 5th Street Grilled Cubano, a slight departure from the traditional Cuban sandwich Duke City diners have embraced with a passion. This Cubano is crafted from tender marinated pork loin and Swiss cheese with fresh spinach, pickle and a Citrus dressing (a marinade of lime and orange juices, onion and garlic) all grilled on an in-house baked Roma baguette. It is served warm and is as comforting and delicious a sandwich as you’ll find anywhere in the Duke City. The freshly baked, just out-of-the-oven baguette (crunchy on the outside, soft on the inside) is a perfect canvas for any sandwich, especially panini. The citrus dressing, a tangy elixir may just transport you to Miami.

15 March 2007: Perhaps even better (if possible) is a sandwich called The Rostisado. This beauty is crafted with slow-roasted beef, pepper Jack cheese, marinated Italian red peppers, lettuce and a proprietary Bistro sauce. The roast beef is roasted on the premises (as are the pork and turkey) and it is piled high on a fresh-baked Roma French roll. It’s a very tender roast beef which might just rekindle memories of mom’s pot roast. The Italian peppers (roasted and marinated in oil and oregano) are so good, you might want to order a separate Italian red pepper salad (for a mere pittance more).

19 August 2014: Having an office within easy walking distance of the Roma Bakery & Deli is one of the very few perquisites of my Kim’s job. Over the years she’s sampled virtually everything on the menu several times over. She raves so much about the croissants that not having one was not an option for me. The Southwest Tuna Croissant is the very best tuna-based sandwich I’ve had in New Mexico (and as my readers know, one of my life’s quests is to find a tuna sandwich equal to those in Massachusetts). This one is close! The tuna is as fresh as is possible and it’s not overwhelmed by mayo or salad cream. Instead, it’s ameliorated with just enough finely chopped jalapeño peppers to earn its sobriquet and give the tuna a discernible punch without detracting from the freshness of the tuna. Onion, cilantro and tomatoes are the only other ameliorants. The croissant is buttery, soft and flaky (though not overly so).

A separate deli case displays the deli’s various salads, all of which appear as fresh and inviting as possible. The Southwest Tuna Salad, a cool mound of the aforementioned tuna on a bed of fresh mixed greens, will forever be my choice after having experienced that tuna on a croissant. The pasta salad, however, is no bride’s maid. In a city where it may be impossible to find a good pasta salad, this is a great one. Salads are available in small or regular sizes. The soup-of-the-day is made daily from fresh ingredients. Monday is green chile stew day, a cause for celebration in Albuquerque.

The name “Roma,” by the way, has nothing to do with the Italian city by that name or with the wine which once sponsored Championship Wrestling on Channel 7 (does anybody remember Cyclone Negro panning Duke City drunks?). It has everything to do with being located on Roma Avenue. The Roma Bakery & Deli is open on weekdays from 7AM to 2PM. It’s closed on Saturday and Sunday.

This tiny gem has been called one of downtown’s best kept secrets. Frankly, it’s far too good to be a secret. This is the type of treasure the downtown revitalization folks and Albuquerque tourism should trumpet with pride. Residents and tourists can’t live on chile alone.