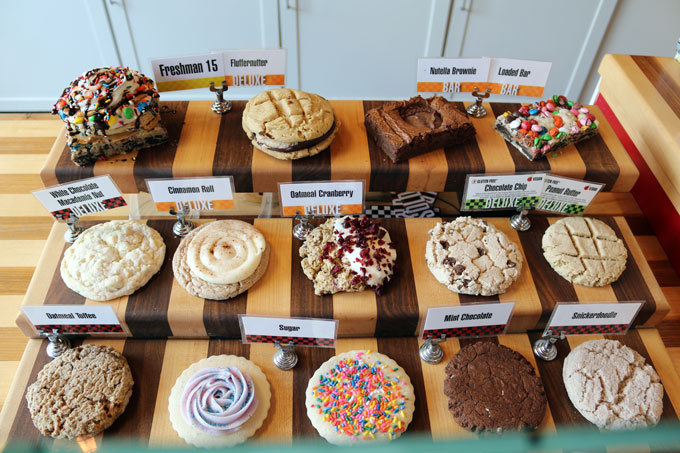 With whom would you share your last cookie? For me the answer is easy. I’d share my last cookie with my friend Darren, the delightful younger brother of Dazzling Deanell. During Larry “the professor with the perspicacious palate” McGoldrick‘s most recent 39th birthday celebration, there were party favors galore on every table including biscochitos from Celina’s Biscochitos (review upcoming). While all eyes were turned to the dance floor where Larry gaovtted with a lovely lady, someone stealthily sneaked all the biscochitos at our table onto Darren’s plate and even under his hat. Darren denied culpability, but the trail of crumbs to his plate may have given him away.

Who can blame anyone for wanting more cookies? A 2015 article on The Daily Mail reported that the average American adult consumes some 19,000 cookies (roughly one cookie every day from age of 18 to 70) in their lifetime with chocolate chip being the favorite. This staggering figure does not account for all the cookies consumed in childhood. More than twenty-percent of respondents to a cookie poll indicated they consume upwards of ten cookies a week. The most interesting revelation is that 31 per cent of millennials say they love cookies more than alcohol. Why do we love cookies so much? 78 percent declare cookies can definitely make them feel happy or content, while 61 percent believe a good cookie gives them a sense of comfort, and 33 percent say cookies can calm and relax them.

If indeed millennials prefer cookies to alcohol, Rude Boy Cookies on the fringes of the University of New Mexico should be a goldmine. Instead of keg parties, perhaps cookie parties could become the norm at frat and sorority houses. Instead of sneaking flasks, students and faculty alike could more brazenly eat cookies. Binge cookie consumption could replace binge drinking. Perhaps some enterprise collegiate could even figure out how to make “cookie pong” more sanitary and prevent cookies from breaking apart when they’re bounced.

Contrary to what some of you may be thinking, the appellation “Rude Boy” doesn’t have a thing to do with the male millennial attitude. Instead the name rude boy speaks to founding owner Mike Silva having played in ska and reggae bands for years. Rude boy is a street slang term which originated in Jamaica back in the 60s. The term describes youth who are dedicated members of the ska scene More recently a song titled “Rude Boy” by the Barbadian artist Rihanna spent several weeks on the Billboard Hot 100 list. Unfortunately the song’s rather ribald lyrics prevent me from sharing them on this PG blog.

Located on Harvard Drive next door to the Brickyard Dive, Rude Boy Cookies does project an ambiance which pays tribute to the ska movement of the ’50s and ’60s. The dulcet tones of ska and reggae music help set the mood for a cookie consumption experience you won’t soon forget. Rude Boy Cookies launched in July, 2014 and within eighteen months was New Mexico’s sole representative on FlipKey’s (a TripAdvisor vacation rental site) list of “Best Local Bakeries Worth Traveling For.” Being singled out as the “best local bakery” in the Land of Enchantment was quite a coup for the nascent cookie shop.

Few things in life are as welcoming as the aroma of freshly baked cookies just out of the oven. Rude Boy Cookies is a welcome milieu. Step in and your eyes will fixate pretty quickly on the glass case under which some fourteen different cookies will command your attention. Selections include gluten-free and vegan cookies as well as monthly specials such as the aptly named “Freshman 15” (crafted with a loaded bar, peanut butter, a chocolate chip cookie, cinnamon marshmallow fluff, pretzels, M&Ms, whipped cream, chocolate sauce and rainbow sprinkles. A few of these and the freshmen fifteen (the amount of weight gained during a student’s first year at college) could easily turn into a sophomore sixty.

Seating at Rude Boy is somewhat limited. Get there early and head straight for the small table with a view to the kitchen in which cookie baking magic transpires daily. Watching the perpetually in-motion whirring mixer is mesmerizing though your eyes might also train on the large tray of M&Ms in all their multi-hued glory. In addition to a handful of small tables, the bakery offers seating on bar stools and on a comfortable lounge area. Though only 1,200 square-feet in size, Rude Boy’s aromas and flavors are gargantuan.

In addition to the cavalcade of cookies, Rude Boy offers a variety of Creamland ice cream flavors. Creamland, a New Mexico tradition with which many of us grew up, continues to make great ice cream for generations of New Mexicans. Rude Boy invites you to sample cookies warmed a la mode with a scoop of ice cream, or better yet to try a decadent cookie ice cream sandwich. Several years ago while visiting San Diego, we ran across the Baked Bear, a restaurant specializing in “customized” ice cream sandwiches. Several (though not as many as offered at Rude Boy) cookie flavors were available.

My inaugural Rude Boy experience was a chocoholic’s dream: an oatmeal toffee cookie top, chocolate cookie bottom with chocolate ice cream in the middle. If do-overs were possible, both top and bottom would be chocolate. The oatmeal-toffee cookie should be eaten on its own so that proper reverence and appreciation can be payed to this masterpiece. My grandma Andreita made the best oatmeal cookies I’ve ever had in my 39 years on this planet. Unfortunately she took the recipe with her. The one ingredient that’s a certainty in her recipe was love, an ingredient you can taste also in Rude Boy Cookies.

Among the inventive cookie collection under glass is one fittingly called a cinnamon roll cookie. Essentially it’s a thick and fluffy cinnamon cookie topped with cream cheese icing and a sprinkle of cinnamon. It’s best served warm. Though a bit too sweet for me, it’s a cookie nearly as sweet as my Kim who enjoyed it immensely. She notes that it’s far more cinnamony than many cinnamon rolls served around the Duke City and that it does indeed taste like a cinnamon roll. Now if only Rude Boy could create a cookie which tastes like the fabulous and famous Frontier roll.

In its annual “Hot Plate Awards” edition for 2019, Albuquerque the Magazine bestowed a well-deserved award to Rude Boy Cookies for its “cheesecake bar.”  “It takes precision, quality and a certain unique flair to earn a Hot Plate Award” and the cheesecake bar has “shown all those traits, and then some.”

My friend Darren might not be able to sneak away with all the cookies under the display case, but if he could it’s a good bet that if he could, he’d want to share them. These are cookies meant to be shared with friends and family.