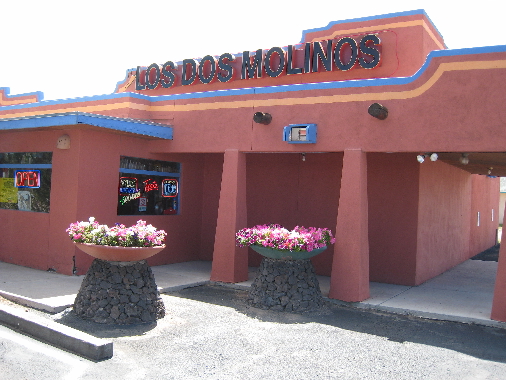 Just how hot is the chile at Los Dos Molinos? The New York Times suggests you “travel with a fire extinguisher” and that “everything, with the exception of the margaritas, is incendiary.” New York magazine raves that “Not since Drew flashed Dave has Manhattan witnessed a hotter display than the one at Los Dos Molinos.” The Arizona Central dining guide asks “can you take the heat,” calling Los Dos Molinos “the lodestone for leather tongues.”

Now these are all unimpeachable sources with impeccable credibility (at least when it comes to restaurants), but the source that got my attention quickest was a Garfield comic strip in which the irascible cat is challenged to a hot pepper eating contest by Jon, Garfield’s long-suffering human companion. In the first panel, Jon pops a jalapeno pepper into his mouth without breaking a sweat. Garfield follows with a cayenne pepper which Jon then one-ups with a Habanero which draws more than a bead of sweat. Not to be outdone, Garfield tosses a “Los Dos Molinos Death Pepper” into his mouth. The pepper is so incendiary that in dragon fashion, he shoots a massive fireball out of his mouth, scorching Jon in the process. Holding an empty cup of water, Garfield concedes, “you win.” Jon, charred and still smoldering responds, “then why am I not happy.”

The hellish pepper which proved the undoing of Garfield was actually a Peruvian Death Pepper, a mythical pepper said to be close to 15 million Scoville units in terms of heat. So, the Garfield comic strip which hangs throughout the Los Dos Molinos restaurant may have been altered, but to many diners, the sentiment aptly describes their dining experience at this legendary New Mexican restaurant.

Ironically, there are no Los Dos Molinos restaurants within the Land of Enchantment, the closest of the five restaurant branches being in Springerville, Arizona, about a dozen miles inside the state line. There are also three Molinos restaurants in the greater Phoenix metropolitan area, including one in the former mansion of Tom Mix, the cowboy star of the 1920s and 30s. A fifth restaurant is located in Metropolis itself where Los Dos Molinos has taken New York City by storm.

Our inaugural visit was to the Springerville restaurant where it all started nearly a quarter century ago when Victoria Chavez launched the family’s flagship restaurant. When considering what to name the restaurant, Victoria and her husband Eddie decided to name it for two old chile grinders given to them by their respective grandmothers. Those “molinos” (grinders) are still on display on a shelf near the entrance to the restaurant. Perhaps a glass encased shrine would have been more appropriate.

The visual bombardment at Los Dos Molinos is nearly overwhelming. There is something to see everywhere you turn including pinatas on the ceiling, flashing neon signage, old farm implements, diamondback rattlesnakes mounted on flatboard and even faux swordfish (the type you see at many mariscos restaurants). Framed and unframed newspaper clippings are strewn throughout the walls with the aforementioned Garfield comic strip even taped to some banco style seats.

Los Dos Molinos, at least the Springerville branch, does not accept credit cards or out-of-state checks (not even from New Mexico). Fortunately, two ATMs are within easy walking distance of the restaurant. The little ambulation to the ATM built up our appetite for what promised to be an exciting dining experience on what we’d read is “Santa Fe style” New Mexican cooking.

It’s been my woeful experience that–with very few exceptions–restaurants outside the Land of Enchantment which purport to serve “New Mexican food” generally present an shameful facsimile. One exception if Richardson’s Cuisine of New Mexico in Phoenix. Could lightning possibly strike twice? Could there actually be two excellent, or at the very least “passable,” New Mexican restaurants in Arizona? There were two indications that we might be in for a let-down.

The first was the unmistakable olfactory attacking aroma of cumin in the air. You’re probably thinking, “there he goes again on his I hate cumin soapbox.” As documented several times on this blog, cumin has no place in New Mexican cuisine, especially on chile which needs absolutely no amelioration, especially from such an offensive, odoriferous spice.

The second sign we might be disappointed was in the spelling “chili” throughout the restaurant’s menu. To many purists like me, that spelling is a cardinal sin, an insult, an indication of inauthenticity. Los Dos Molinos Web site advises, “When you read our menu and see the word “chili” keep in mind we use New Mexico Chilis and this means “Hot” with the best flavor this side of the Rio Grande.” The truth is, when traditionalists like me see chili, one thing comes to mind automatically–the aberration served in Texas (generally with ground beef, chili powder, often with tomatoes and kidney beans and usually with cumin).

The salsa, both a red chile version and one made with green chile, is redolent with cumin, so much so that what would otherwise have been very good salsa lost all of its appeal to us. Our waitress warned us that the red salsa was hotter than the green salsa, but the green chile was hotter than the red chile on the restaurant’s entrees. The degree of piquancy was probably on the level of the salsa at Sadie’s Dining Room in Albuquerque, a salsa many people find plenty hot. The big difference is that Sadie’s doesn’t allow cumin anywhere near its salsa (or chile for that matter). At least the chips were good–low in salt, crispy and fresh.

Fortunately there was no cumin whatsoever in an appetizer called a Cheese Crisp which might be an Arizona invention because it’s not something I’ve ever seen in any restaurant in New Mexico. My familiarity with it comes exclusively from devouring all of Seth Chadwick’s reviews on his phenomenal Feasting in Phoenix blog. Seth is very much of an authority on cheese crisps and is able to discern even subtle differences between cheese crisps at the restaurants in which he orders this appetizer.

A cheese crisp bears some similarity to a quesadilla, save for the fact that it’s not layered and the tortilla is crispy. It’s simply a crispy tortilla topped with melted cheese, a sort of tortilla pizza you might call it. Seth proclaims Los Dos Molinos version of a cheese crisp as “excellent” and as is often the case, I’m inclined to agree with my sage colleague.

The cheese crisp was served in a round baking tin. Both yellow and white cheeses were used and they were melted all the way through–thankfully not to the point at which they were too oily. We would have loved to partake of salsa with this appetizer, but why ruin a good thing.

Despite our experience with the cumin-laden salsa, I still ordered Los Dos Molinos beef enchiladas “Christmas style” crowned with a fried egg over medium. Fingers crossed, I hoped the salsa was an anomoly and that the chile truly was, as advertised “Santa Fe” style. Alas, my optimism was short-lived.

The enchilada plate was beautiful to look at, a colorful plate nearly completely covered with some of my favorite things, including beans and Spanish rice. Wafting toward my nostrils like the malodorous stench of unwashed feet was that dreaded demon-spawn spice, cumin. It even permeated the rice, a poor innocent victim like us.

The shredded beef nestled comfortably within the confines of corn tortillas was wonderful, so tender it pulled apart easily with just a fork. The fried egg was done to perfection, slightly crispy but puncture that yolk and yellow goodness runs out. The beans were studded with whole pintos and were delicious.

The red and green chile reeked of cumin, but I tried gamely to put a dent on the generous portion, all the while knowing that I’d pay for it later with an aftertaste that just doesn’t leave easily. I would normally rather swim the piranha infested waters of the Amazon than to ingest chile bespoiled with cumin, but the only way to write an honest appraisal is to suffer for my art. Let’s just say I won’t suffer a second time at Los Dos Molinos.

Having learned from the salsa, my Kim wisely chose a combination platter, asking for the chile on the side. The “safest” item on the patter was a shredded beef taco in which tender tendrils of delicate beef were undefiled by cumin. The taco, replete with beef, lettuce and tomatoes was delicious, a star. There was just too much cumin on the tamale to enjoy it.

As is always the case when cumin crosses our lips, we scoured the menu for something to obfuscate the offending aftertaste. Dessert offerings included something called a “burro” which appeared to be an apple filled pastry shell topped with vanilla ice cream and drizzled with powdered sugar and chocolate. We devoured the burro, relishing every morsel of food that didn’t include cumin. In truth, this was the highlight of our meal at Los Dos Molinos, but might not have been such a big hit with us had we the restaurant fulfilled even a modicum of our expectations.

There are some who will consider this review heretical, a sacrilege against a beloved institution. Connoisseurs of cumin may question my palate and that’s perfectly fine. This review is, after all, my opinion and yours may differ, even greatly. I would invite the nay-sayers to visit Mary & Tito’s in Albuquerque for a taste of chile the way it’s supposed to be done–pure and unadulterated bliss.