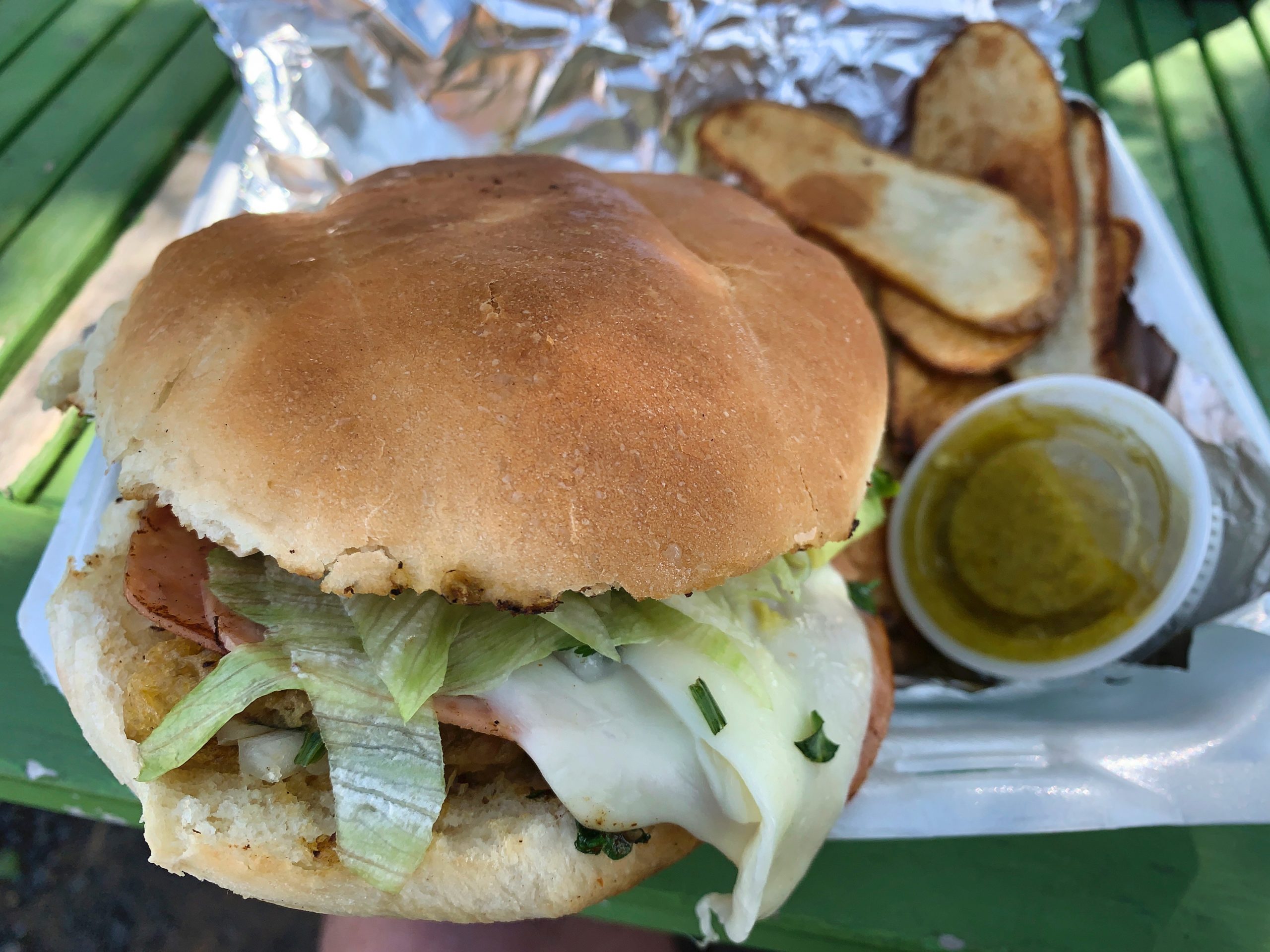 Drive eastward on Airport Road in Santa Fe toward Cerrillos and you just might wonder if you accidentally traipsed into the Twilight Zone and somehow found yourself in Los Angeles.  At the very least, you might find yourself declaring “I knew I should have made that left turn in Albuquerque.”   “What is this madness,” you ask.   As we found out, on weekends Airport Road is home to a veritable cavalcade of taco trucks, the overarching term for food trucks of all types in Los Angeles.  Prowling the mean streets of the City of Angels are more than 3,000 licensed taco trucks and carts.  Street food has become a billion-dollar industry in L.A.

According to Yelp, there are only 42 food trucks in Santa Fe, a far cry from the 3,000 plus in Los Angeles.  On one particular Saturday in October, we marveled at just how many of those 42 food trucks were stationed in parking lots, vacant lots and cozy tree-lined spots on Airport Road. Most of them it seemed, proffered the Mexican food that made Los Angeles the mecca for street food.   Our quest was to experience the reputed best at El Queretano. That quest took us past at least one food truck in each block, every one of them with queued diners clamoring to partake of the featured fare.  El Queretano’s reputation obviously preceded it.  When we reached it, we were disappointed to find out that because of a large take-out order, we’d have to wait at least half-an-hour just to place our order.

It would be erroneous to label any other food truck a consolation prize, Ms. Congeniality so to speak.  The hazy smoke plumes emanating from several of them and wafting into passing cars were like delicious siren’s calls beckoning hungry motorists to stop.  We stopped at the one closest to the Santa Fe Bypass, one with the auspicious name Master Food Truck.  Ostensibly, this food truck has mastered the culinary art of preparing some of Santa Fe’s best sopes, burritos, tortas, quesadillas and for good measure, burgers.  Though relatively new to the City Different, Master Food Truck has garnered acclaim from the Santa Fe Reporter.

Available options from which you can can have your tacos, tortas, burritos, quesadillas and nachos constructed are carne desebrada (shredded beef), carne asada (grilled beef), buche (pork stomach), tripas (small intestines), barbacoa (steam cooked meat) and chicharron prensado (pressed pork).  With so many adventurous choices, you’d think my Kim would go outside her comfort zone and try something her intrepid husband recommends.  Alas, she found my suggestions for buche and tripas unappetizing and ordered a very basic, very boring carne asada burrito.  Okay, “boring” is not usually a trait ascribed to carne asada, but when it’s encased  in a tortilla with nothing else (no cheese, no salsa, no chile, no onions…), it’s boring.  For an essayist of the New Mexico culinary experience, it was one of those “I’m not with her” moments.

My choice would land on the extreme end of a spectrum ranging from “safe and sure” to “fraught with risk.”  With chicharron prensado you don’t always know what you’re going to get.  It could be anything from pressed pork carnitas as made by Elotes Del Rancho to soggy pork rinds.  That’s essentially what was in my chicharron prensado torta though there was also a slice of ham, several salchichas (hot dog wieners), melted queso, lettuce, tomatoes, avocado and a side of incendiary green chile.  Texturally the chicharron prensado took some getting used to, but on a sandwich replete with notes of flavor, I stopped thinking about that texture rather quickly.  Call this torta an artful combination of ingredients with the type of synergy that makes flavors sing–and sing well.  The bread was soft and pillowy, challenging it to retain its integrity with all those moist ingredients.  Served with the torta were French fried potatoes sliced into thin wedges.  They were excellent.

Should you ever find yourself in Los Angeles…er, Airport Road in Santa Fe, make sure you visit one of the phalanx of food trucks dotting the landscape. If you want a very good chicharron prensado or want to try buche, barbacoa or tripas, visit Master Food Truck. You’ll be happy you did!