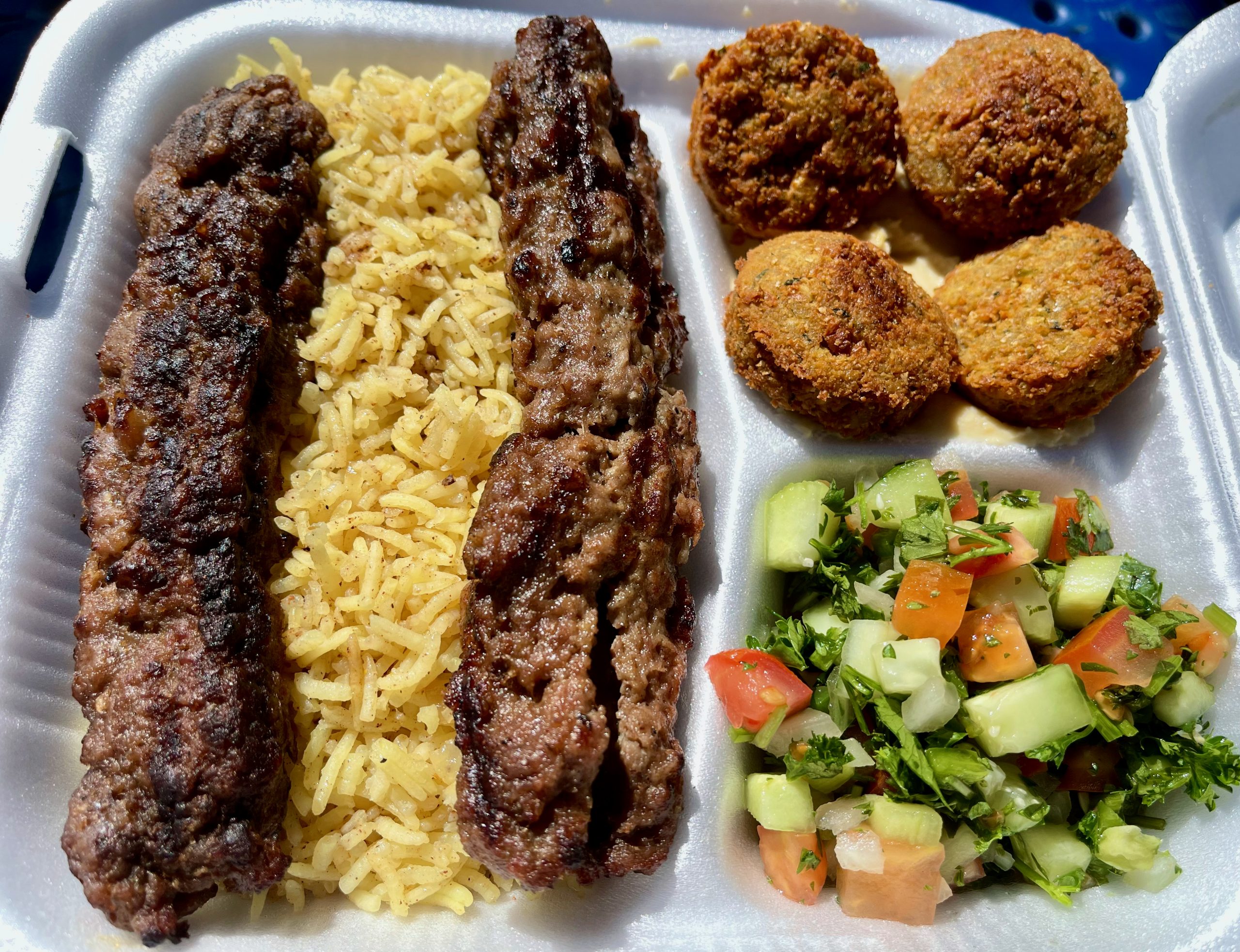 It’s so easy to be judgmental, to take things at face value…to assume.  As my friend Bruce “Sr. Plata” Silver and I approached Mama Zahira Foodies’ order window, we espied the self-deprecating term “The Wacky Iraqi in Albuquerque” scrawled by the vehicle’s rear wheel well.  The term “wacky” made us wary.  It’s just not a term we associate with great food.  No sooner had we reached the window when we were greeted by Riadh Seheem, a thickly accented, very gregarious gentleman who couldn’t wait to tell us about his food truck.  Talking a mile a minute with the unfettered enthusiasm of a child at Christmas, he raved about his truck’s menu.  Yes, it would have been far too easy to be judgmental, but what a mistake that would have been.

A quote from French emperor and brilliant military strategist Napoleon Bonaparte now comes to mind and it has nothing to do with an enemy’s tendencies in battle.  That quote reduces Napoleon from conqueror of most of Europe to compassionate philosopher: “To understand the man you have to know what was happening in the world when he was twenty.” Wow!  When some of us were in our twenties, we were still reeling from teenage angst, applying pimple medication by the trowel and trying to navigate adulthood.

When he was in his twenties, Riadh witnessed more horrors than any human should have to see in a thousand lifetimes.  He observed man’s inhumanity to man in ways most of us could not fathom, experiencing the traumatizing ravages of war in a very close-up and personal manner.  Riadh’s hometown of Baghdad, Iraq was at ground zero for several very intense wars which laid waste to the city and killed tens of  thousands of citizens.  Diseases spread through contaminated drinking water because water purification and sewage treatment facilities could not operate without electricity.

Riadh wasn’t a soldier.  He was a pediatrician, treating the most vulnerable population in the most unimaginable and tragic conditions conceivable.  Sadness revisits him every time he reflects on those times, especially when he recalls having dispensed medication to treat dying children then seeing parents selling that medication on the black market so they could feed the family.  He tenses up when speaking of parents asking for death certificates to be issued for ailing children so that they could receive a small stipend of food and cigarettes from the government.  He shudders at the memories of having treated cholera, typhus and malnutrition as open sewage mixed with the city’s water system.

Knowing there was no way the government of Iraq would allow a doctor to leave the country, Riadh paid a small fortune for forged papers indicating he was actually a car salesman.  Eventually he was able to make his escape to Jordan.  When he finally got a green card and  made it to America, his medical credentials weren’t accepted.  He had to work at McDonald’s, Jack In The Box and a carwash to make ends meet and feed his family.  In time he secured the credentials needed to practice medicine in the states.   he then worked at the Mayo Clinic in Rochester, Minnesota; La Quinta, California; Seattle, Washington and finally at Presbyterian Healthcare in Albuquerque.  He’s been in New Mexico for 14 years.

As he approached his 60s Riadh made the decision to leave medicine and pursue more “sedate” activities.  In 2020 he drove to Virginia where he purchased a food truck.  Though he planned to drive the truck back to New Mexico, it was in no condition to be driven nearly that far.  Worse, most of the motor and internal combustion components were rusty courtesy of the salty air.  He wound up spending more than $40,000 to have the truck transported to New Mexico and effecting necessary repairs, a bargain considering a new truck would have cost over $100,000.

Today on most weekdays, you’ll find Mama Zahira Foodies parked at the Mariposa Basin Park about a hundred feet from a duck pond where dozens of dabbling mallards swim contently.   A number of picnic tables, including one beneath a shaded canopy, offer a peaceful place for your repast.  It’s a peaceful milieu, the antithesis of the mean streets of Baghdad.  During our second visit, we encountered Riadh sitting on a comfortable lounge chair reading a book.  As we’ve discovered, there’s a depth and spirituality to this “wacky Iraqi” we might have missed had we given in to judgmental inclinations.

Also in evidence is an empathic spirit–perhaps part of the nurturing nature all great doctors possess.  Emblazoned on the food truck is an invitation you rarely see: “If you don’t have money, come in and grab a sandwich free.”   Riadh means it.  He’s happy to give a hand up to down-on-their-luck passers-by who can’t pay for a meal.  Even if you can afford your meal, don’t be surprised if he gives you a sample of the special of the day or maybe the falafel he just prepared.  This is a man you can’t help but like, a rare gem of a person.  As you may have surmised, Mama Zahira is his his 82-year-old mother whom he praises lavishly.

24 February 2021: He’s also quite the salesman, describing his food in such glowing terms that you’re going to want to try one or more of everything.  He categorizes his food rather broadly–as “meat” and “not meat.”  Among the not meat items is an item called falafel homemade pita bread, an eight-inch crescent shaped pita bread stuffed with five falafel (made from chickpeas, onion, garlic, parsley, cilantro, jalapeños) and a pickled vegetable salad (five different peppers) all slathered with a mango sauce.

There’s no cholesterol, no trans-fat, no dairy or animal product only lots of flavor and it’s all outstanding.  Seriously, the falafel might be the very best I’ve ever had.  It’s certainly got more personality than any other courtesy of mixed peppers and seasonings that imbue it with a liveliness and moistness rare in falafel.  In fact, the entire sandwich is replete with personality.  The mango sauce is wholly unlike what you might expect with the sweet floral flavor of mangoes taking a backseat to more assertive Middle Eastern flavors.   It’s so addictive you’ll want to slather it on everything.

3 March 2021: A five-item combo plate showcases Riadh’s culinary talents moreso than any other menu item.  Described on Mama Zahira’s website as “fulfilling and delicious” (and that’s selling it short), the combo plate includes flavored basmati rice, two sheesh kabob, hummus, falafel and fresh salad.  Not since the Rolling Stones has there been such a great quintet.  The two sheesh kabob are about six-inches long with grill marks evident.  The meat is tender and lean with notes of complex seasonings that characterize great Middle Eastern food.  The hummus has creamy, melt-in-your-mouth properties.  It’s rich and garlicky, making a nice dip for the falafel (and you already know how much I loved that).  The simple salad (parsley, tomatoes, onions, cucumber with a light, tangy dressing) is refreshing and tasty.  The basmati rice is light and fluffy with a nice mouth-feel and taste.  This is the item all diners of the carnivorous persuasion should order their first visit.

24 February 2021: Baba Ghan’ooj, an eggplant dish is almost as fun to say as it is to eat, but just try spelling it correctly.  Usually enjoyed as a dip or appetizer with pita bread, this creamy, smoky dip is often compared to hummus and indeed there are common ingredients.  Baba ghan’ooj is made with eggplant, tahini, lemon juice and garlic while hummus is made with garbanzo beans.  The rest of the ingredients in hummus are essentially the same as those in baba ghan’ooj.  Flavor-wise, it makes a big difference.  Baba ghan’ooj has an earthy flavor while hummus is more nutty.  Riadh’s version is superb though it would be even better with soft pita instead of the seasoned pita chips.

3 March 2021: Riadh has obviously embraced elements of the Land of Enchantment’s unique culinary culture.  You won’t find red or green chile in every dish, but you will find green chile on the New Mexico style breakfast burrito.  Even without green chile, New Mexicans should embrace the beef kabob burrito, a twelve-inch pita rolled and stuffed with beef sheesh kabob, a vegetable salad (cucumber, tomato, parsley, cilantro, onion, jalapeño), thin onion slices, and smothered with sumac and a garlic white sauce.  It’s not only an innovating of two great culinary cultures, it’s one of the best burritos we’ve had in a while.

3 March 2021: Mama Zahira offers only two desserts.  One is Izlabia, a unique Middle Eastern version of a funnel cake.  Instead of being drizzled with powdered sugar, this funnel cake is filled with sweet syrup that includes rose water and lemon juice.  The other dessert is a walnut baklava, sheets of phyllo dough, brushed with butter and layered with a crumble made of walnuts, cinnamon and (usually) sugar, all poured over with sugar syrup.   Though my preference has always been for pistachio baklava, this is a very good one.

Just like the aforementioned baklava, there are many layers to Mama Zahira’s owner Riadh Seheem, a man who’s survived life’s vicissitudes to find inner peace, a little wackiness and a food truck from which he prepares and serves food with a depth of flavor not often found.