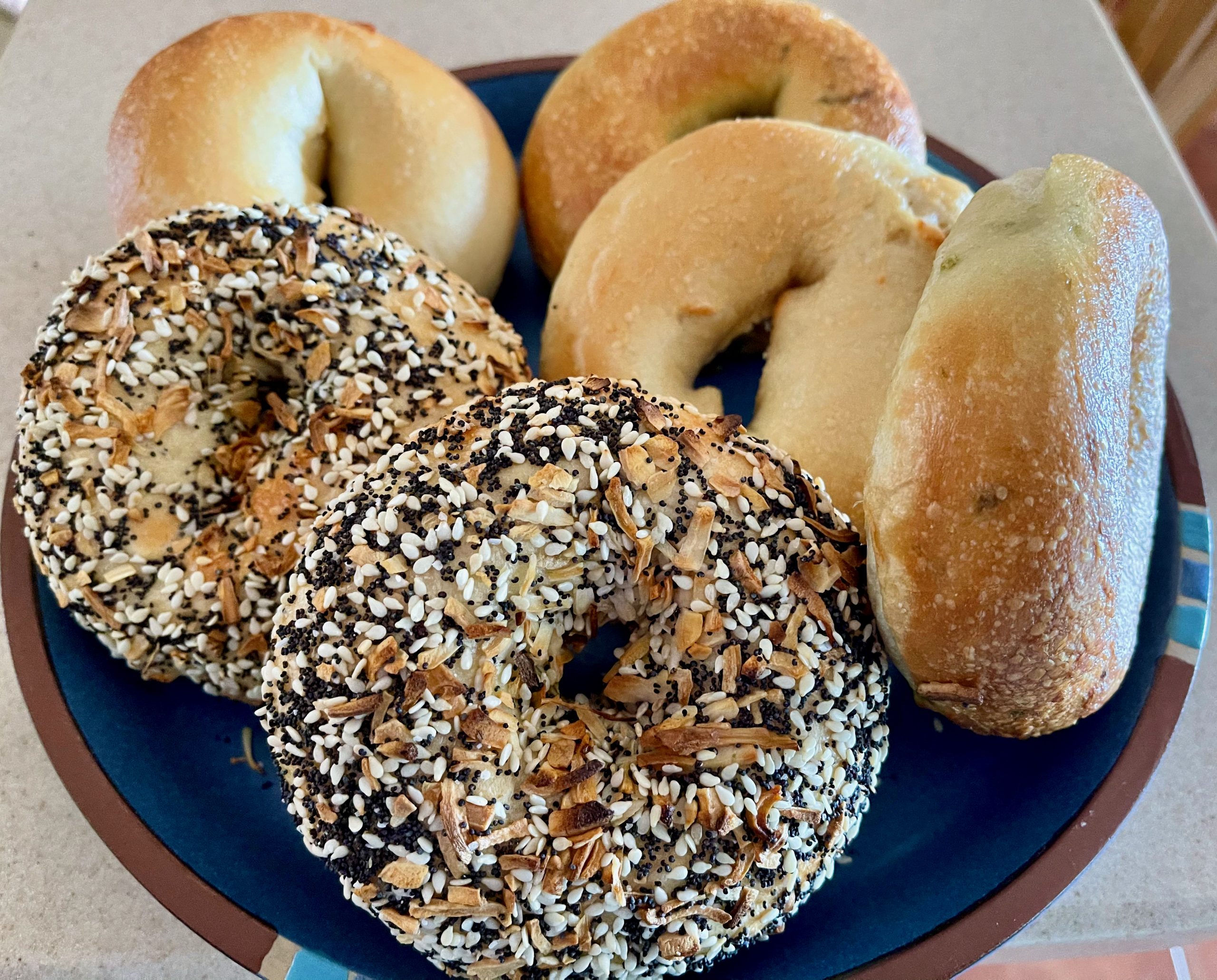 George: “I came this close last night, and then I just sort of chickened out.”
Jerry: “Well, that’s a big move, Georgie boy. Are you confident in the “I love you” return?”
George: “Fifty-fifty.”
Jerry: “Because if you don’t get that return, that’s a pretty big matzo ball hanging out there.”
~Seinfeld

The 1980s comedy Seinfeld has been described as “a show about nothing” largely because it focuses on the minutiae of daily life.  A show about nothing is, of course, a faulty premise.  In the case of Seinfeld, the “nothing” may have referred to the simplicity of each episode’s narrative. More often than not, each weekly show focused on four people coming in and out of Seinfeld’s apartment or a coffee shop talking about their latest bad date.

In 2007, Chowhound, an online resource for food enthusiasts that includes an active community forum of knowledgeable contributors, published within that forum a post asking readers to share their favorite Seinfeld food moments.  Reading the more than 400 comments not only prompted a nostalgic revisit of some of my own personal favorite Seinfeld food moments, it clearly demonstrated that Seinfeld wasn’t a show about nothing.  It was undeniably a show about food.

Quite often the foods so integral to the plot were Jewish foods.  That’s only fitting considering Jerry Seinfeld who starred in the eponymous series, is Jewish (though his character on the show didn’t seem to practice and observe many Jewish traditions…other than enjoying most Jewish foods).  Seinfeld made such terms as “pastrami, the most sensual of the smoked cured meats” part of the pop culture lexicon.  Other references on the show painted unique perspectives about bagels, schmear, black and white cookies and matzo balls.  Only rugelach seemed to escape the Seinfeld writers.

Having seen every Seinfeld episode at least a dozen times, my friend Bill Resnik and I frequently quote many of the pop culture lines immortalized by the show…and we celebrate Festivus, “the festivus for the rest of us.”  Many a time has one of us uttered George Costanza’s priceless quote “Do you ever get down on your knees and thank God you know me and have access to my dementia?”  I can only imagine the fuscillade of rapid-fire one-liners we would have uttered had we visited Ruthie’s Bagels together.

One thing neither of us would have said even if threatened with violence is Kramer’s memorable “Hey, no bagel!  No bagel!  No bagel!  No bagel, Hey!  Bill has been known to have some bagel with his schmear and only proximity to life-altering bagels stops me from a daily bagel and schmear indulgence.  In Ruthie’s Bagels we may have found the bagel Moses and the Israelites were looking for when they wandered in the desert for forty years.

Ruthie’s Bagels is ensconced within the Ronald Gardenschwartz Jewish Community Center on Wyoming.  Place your order on Ruthie’s website and your order will be ready for pick-up within an hour.  Choose curbside pick-up or step inside to the Rhubarb & Elliot Cafe window located inside the lobby.  Either way you’ll meet the delightful Ruthie, a veritable whirling dervish whose smile is apparent even when she’s wearing a mask.  Ruthie boils bagels in the time-honored traditional manner sure to please even the most savvy or persnickety diners.  Tom G. who initially recommended I visit Ruthie’s wrote “I’m a bagel snob and IMHO these are right up there with some of bagel shops and Jewish deli’s in NY where I grew up.”

Ruthie’s bagels are available by the four- or six-pack, but they’re cheaper by the baker’s dozen (13).  There aren’t quite thirteen different bagels, but there is wonderful variety from which to choose: perfect plain, lots ‘o’ everything, super sesame, poppy seed & onion, great garlic, Hatch green chile, Chimayo red chile, multigrain with sunflower seeds and oats, multigrain cinnamon raisin and chocolate chippy.  Because humankind cannot live on bagels alone, Ruthie also offers what Seinfeld character Elaine Benes would have described as “a tempting schmear of authentic Jewish delicacies.”  And speaking of schmear, Ruthie has that too: green chile schmear, plain cream cheese spread, wild lox schmear and scallion schmear.

You can, in fact, find such delights as hummus (by the pint), matzo ball soup (by the quart), dill-spiked tuna (by the half- or full-pint),  Israeli chop salad (by the pint or quart) and deviled egg salad (by the half- or full-pint).  Other “appetizings” (SIC) include NM Xmas red and green bagel chips, potato knishes (pack of two or six) and a loaf of traditional braided Challah bread.  You might indeed feel as if you’ve visited a very good Jewish bakery in New York City.

During our inaugural visit, my Kim and I ordered a six-pack of bagels, two of each plain, green chile and the intriguing “lots ‘o’ everything.”  We subscribe to Serious Eats “The Good Bagel Manifesto” (or at least portions of it) which lists some of the characteristics that distinguish a bad bagel from a good bagel and a good bagel from a great bagel.  The manifesto tells us the crust on a great bagel “should give way to a crumb that’s dense and chewy, but tender and easy to bite through.”  That’s precisely our experience with Ruthie’s bagels.  We don’t necessarily agree to the Manifesto’s contention that “a good bagel shall not require toasting.”  We love our bagels toasted though it was easy to imagine Ruthie’s bagels being just as delicious untoasted.

Not surprisingly our favorite of the three bagels was the green chile bagel flecked with pleasantly piquant chile and made doubly delicious with a generous application of green chile schmear which I applied like a carpenter applies plaster with a trowel.  The “lots ‘o’ everything bagel, replete with sesame seeds, poppy seeds, garlic, multi-grain and everything but the kitchen sink called to mind Elaine Benes having failed a drug test on account of having eaten a poppy seed bagel.  It would have been worth a false positive reading for a bagel as delicious as the “lots ‘o’ everything.”

In a memorable Seinfeld soup episode, Seinfeld reluctantly agreed to take annoying hack comic Kenny Bania to Mendy’s restaurant for a meal in exchange for a suit Bania gave him. Bania ordered the consommé, then informs Jerry that this doesn’t count as payback for the suit because “soup’s not a meal.”  Elaine agreed with Bania, arguing that heartier soups like mushroom barley, chicken gumbo, or matzoh ball might count as a meal, but consommé does not.   After thoroughly enjoying Ruthie’s matzo ball soup, we’re inclined to agree with Elaine–matzo ball soup is a meal, a nutritious, hearty and delicious meal.  The matzo balls themselves were about the size of a large marble and there were several of them in each serving as well as fresh peas and carrots.

As a snack for the 20-mile trip back home, we enjoyed the  XMas Red & Green Chile Bagel Chips, a bag of pure dynamite.  Too piquant for my Kim, they proved a nice departure from the usual potato chips, but similar to their potato chip brethren, several broken pieces left tiny bagel chip shards that were a bit of an annoyance.  Someday someone will invent a fail-safe method for maintaining the structural integrity of potato and bagel chips and they’ll make a fortune.

Drake’s coffee cake, black and white cookies and chocolate babka are all Seinfeld dessert staples, but nary a mention was made of another Jewish standard–the rugelach, a filled pastry cookie.  Ruthie’s offers three types, one filled with raspberry, one with peach and one with a sweet walnut mix.  All three are quite good, albeit no more than about three bites per.  Unlike far too many desserts, these little gems aren’t overly sweet nor are they overfilled and messy.

Ruthie’s Bagels are also available at La Montanita Co-Op.  No matter where you find these bagels or any of the other “appetizings,” you’ll enjoy them so much, you might not even recall (until later) your favorite Seinfeld episodes centering around Jewish food