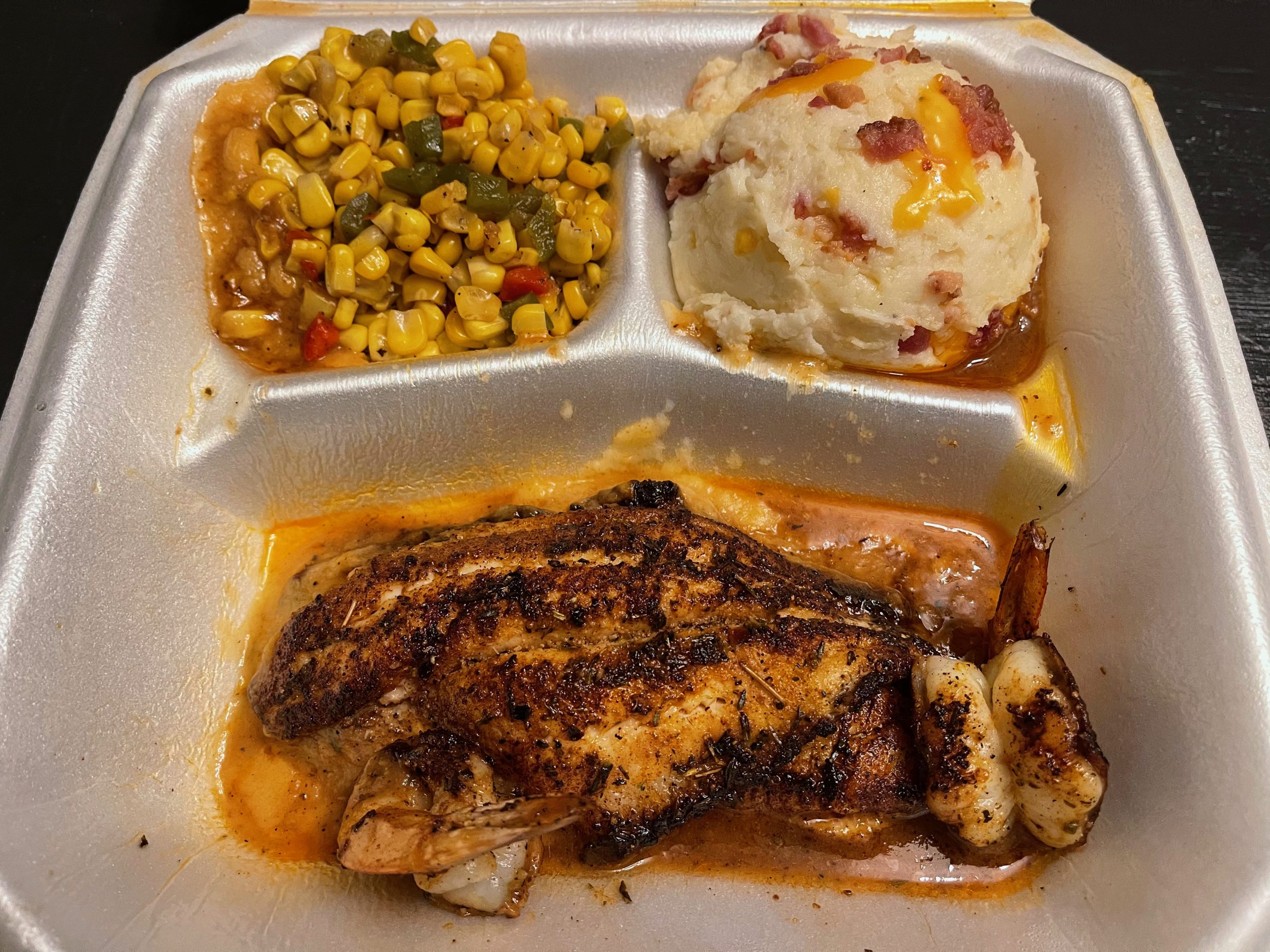 Throughout its storied history, Amarillo’s culinary reputation has been based primarily on one kind of food: beef.  That’s no surprise considering Amarillo-area ranches produce thirty-percent of the nation’s beef and ninety-percent of the beef in Texas.  So when the city on the High Plains is described as a “cow town,” it’s not solely because of the odoriferous emanations from thousands of cattle in the feed yards along I-40.  While researching restaurants to explore during our extended weekend stay in Amarillo, it quickly became apparent that while beef may still be king, cows alone no longer define Amarillo menus.

Among the surprises that emerged from my research is the sheer number of Cajun and Soul food restaurants in the Amarillo area. It’s almost a full day’s ride from West Texas to “Lapland” (what the southeastern corner of Texas is called because of the overlapping of Cajun and Texas cultures).  The popularity of soul food is probably easier to explain.  As LaMyiah Harvel of the ABC affiliate in Amarillo explains: “The roots of Soul Food are tangled into each and every one of us. What was once meals simply made to survive, is now one of the most popular types of cooking in the nation.”

With several Soul Food restaurants from which to choose–every one of them rated highly by both media and public–we knew we couldn’t go awry.  Ultimately, we opted for the Soul Food restaurant with a story that resonated most with us.  Since its launch in 2015, Delvin’s Restaurant & Catering has been mentoring students from two of the city’s high school culinary arts programs, teaching them that operating a restaurant is more than throwing food on a grill, skillet, or in a fryer.  The program also imparts life and problem-solving skills.  How can you not love that?

We also appreciated the fact that Delvin’s Restaurant is heavily invested in the community, hosting fund-raising events and donating generously to programs benefitting the area’s children.  In recognition of their altruism, owner Delvin Wilson and his wife Sheree were honored as the man and woman of the year during Junefest in 2016. It’s no wonder Delvin’s is such a community hub in a Northwest Amarillo area peppered by vacant buildings and poverty.

We arrived at Delvin’s shortly before its Saturday closing time.  Instead of being rushed, we enjoyed the “Texas friendly” spirit that’s welcomed us at every restaurant during our stay in Amarillo.  The entire staff was friendly–even moreso when I told them about The Dude, our debonair dachshund.  Two of the young ladies quickly made their way to our car where they discovered I had undersold The Dude’s good looks (he takes after his mom).  It gave me more time to peruse the menu, a compendium of Southern, Soul and Barbecue.

Delvin’s smokes its barbecue fresh daily for 12-14 hours, a low-and-slow process that ensures quality and deliciousness.  Smoked meats make their way onto sandwiches; one-, two-, or three-meat platters; half a smoked chicken and half- or full-slab of ribs.  Daily specials are available Tuesday through Saturday.  My Kim, a poultry paramour was craving fried chicken, such a popular offering that Delvin’s was down to its last two pieces of dark meat chicken.  She pounced on it.  The fried chicken was moist, delicious and imbued with a golden-brown crust that was thin-yet-crackly.  How good was that crust?  My Kim usually disdains crust, but she polished it off.

It’s almost unfair to offer two specials so equally enticing that no mere mortal can make a quick decision.  Such was my dilemma in seeing both oxtail and blackened catfish available.  Although it’s impossible to go wrong with either, I was left wondering just how good the special not taken would have been.  The blackened catfish was superb, flaky and slightly sweet with nary any hint of muskiness you sometimes find in the bottom-dwelling fish.  The blackening spices didn’t have much of a kick, but that works well with a fish as light and delicate as catfish.

Both my Kim and I had the same sides–the relatively simple but delicious corn o’Brien (pan-fried corn sautéed with bell peppers and onions) and the twice-baked potato casserole.  As always, it surprised us just how much the addition of red and green peppers and onions can elevate the flavor of sweet corn, adding a contrasting flavor component that works well.  The twice-baked potato casserole isn’t as creamy as mashed potatoes but it’s studded with bacon and melted cheese, two components that elevate any dish.

As our servers were making a fuss over The Dude, we asked which dessert would go best with a dachshund as sweet as ours.  Both servers agreed the Coke A Cola Cake might do the trick.  Having lived in the Deep South for eight years, we’ve had numerous versions of Coke A Cola Cake, but Delvin’s version might be the best.  The cake itself has just a hint of the carbonated flavor of Coke with none of its effervescence, but it’s light and fluffy with a frosting that also inherits some of Coke’s unmistakable sweetness.

With impeccable service, outstanding food and tremendous value, Delvin’s is the type of restaurant we’d all like in our neighborhood.  It’s no wonder 68 Yelpers have given it a five-star rating and none have rated it any lower.