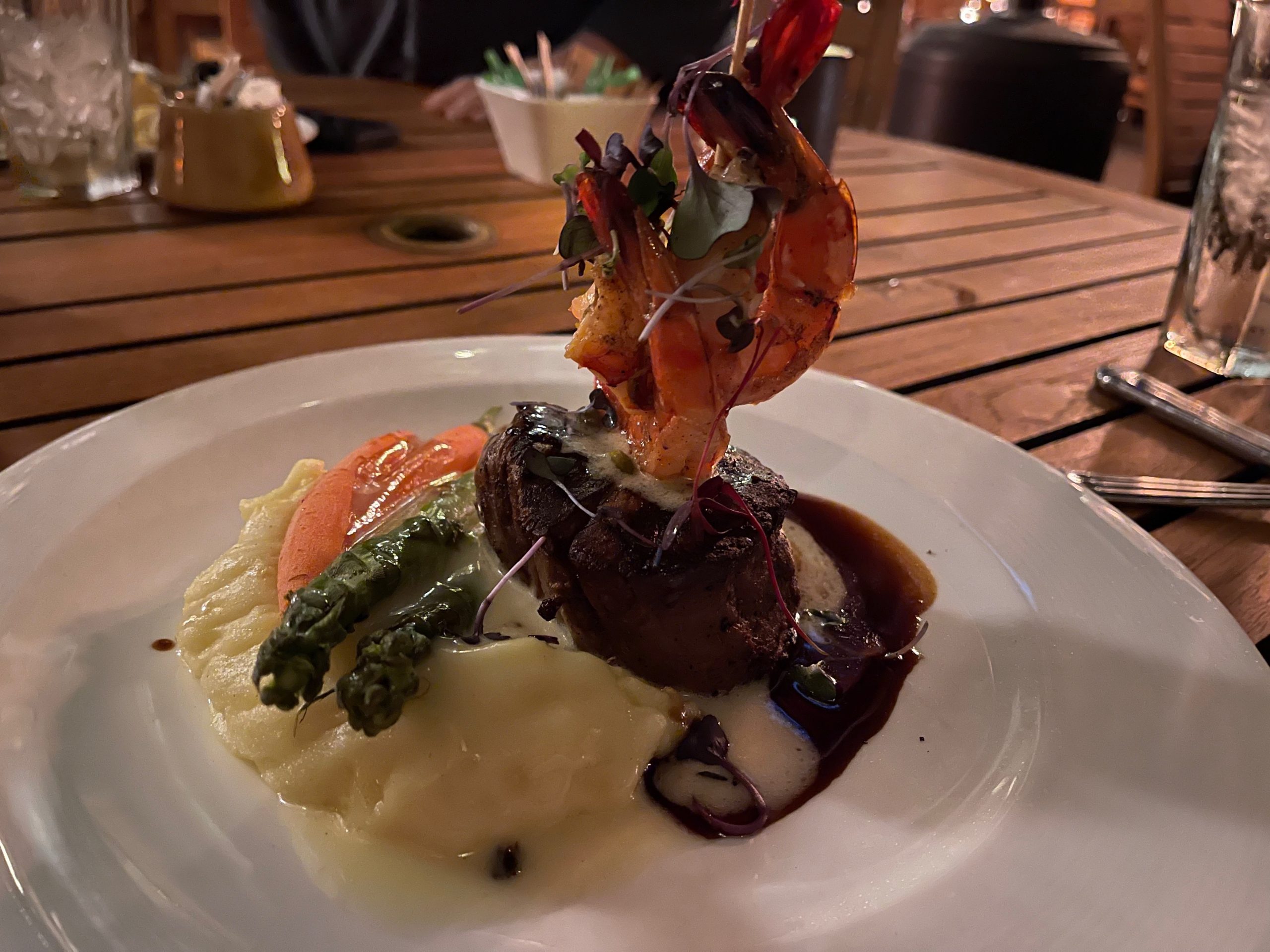 “Viejo El Viento,” one of my favorite songs during my youth in Peñasco asked “como vas a comparar el original con la copia?,” essentially how can you compare the original with a copy.  As our Christmas visit to Roy’s at the JW Mariott in Phoenix proved, sometimes the “copy” is so good that it becomes a life quest to see if the original matches up and sometimes there’s so little difference between the original and the copy that only the most discerning palate can tell the difference.  It appears a “backstory” is in order.

In 2013, the featured special at the magnificent Blades’ Bistro in Placitas was black cod with a miso glaze, a dish Chef Kevin Bladergroen was taught to prepare by restaurant impresario and celebrity chef Roy Yamaguchi, founder of Hawaiian fusion cuisine.  It turned out to be one of the very best fish entrees I’ve ever had–not only in New Mexico but anywhere in the 46 states which I’ve visited.  It’s a luscious dish which will make grown men swoon in appreciation.   That was the copy.  There’ll be more about the original below.

Now that my beautiful 92-year-old mom no longer prepares Christmas dinner for her family, my Kim and I don’t dream of the White Christmas idyll: fire in the hearth and a blanket of snow covering the ground.  We dream of palm trees, 70-degree days and dinner on a patio with The Dude.  In recent years we’ve made our escape to either Palm Springs, California or Tempe, Arizona, both of which have much better Decembers than the Land of Enchantment.  You wouldn’t get us to either of those summer furnaces during the spring or summer.

During my eighteen years at Intel Corporation, Phoenix was a frequent destination for business meetings.  Well-intentioned colleagues and friends feted their guests with visits to their favorite local and national chains.  Is it any wonder savvy New Mexicans considered the Phoenix area a culinary wasteland?   I would often take a very late flight back to Albuquerque in order to explore the Valley of the Sun’s restaurant offerings on my own.  While my solo ventures proved fruitful in ferreting out several excellent eateries, I always knew extended stays would be the only way to truly uncover even more gems.

As we winnowed down our list of prospective restaurants for Christmas dinner, we knew no restaurant could hope to duplicate mom’s fabulous (and very traditional) Christmas dinner.  As such, we focused on menus she wouldn’t have created.  For example, she probably would consider fish for Christmas a sacrilege, but her son the gastronome knows no bounds when it comes to dining.  In 2020, we enjoyed upscale Italian cuisine from the Fat Ox in Scottsdale.  We hoped to equal that epicurean excellence in 2021 and studied restaurant menus at length.

While beguiling options abounded, one singular menu item immediately ensnared my attention.  As you may have guessed, it was THE original version, the progenitor of and inspiration for the fabulous black cod Chef Bladergroen served at Blades’ Bistro.  At long last, we would learn how closely and how well the “copy” would compare with the original.  During our one previous visit to Roy’s in Las Vegas, we had been besotted only by the molten lava cake but even that intensely gooey, chocolatey couldn’t compare with the sublime black cod.

Chef Roy Yamaguchi’s storied career is steeped in accomplishments and honors. Born in Japan, he attended culinary school at the Culinary Institute of America (the real CIA) in New York, studied cooking in Los Angeles and settled down in Hawaii. It was in the Aloha State that he launched the first of his eponymous Roy’s Restaurant. Today, he remains the only Hawaiian chef to win the James Beard award, currently overseeing 28 Roy’s Restaurants.  There are two Roy’s in the Phoenix area, neither of them especially close to our Tempe rental.

We made reservations at the Roy’s located on the grounds of the exclusive JW Marriott Desert Ridge Resort. Somehow it’s got a Phoenix address though it seems to be located off the 101 east of Scottsdale (of course we may have been turned around).  Even if you’re just walking through the complex to get to Roy’s Restaurant, you’re surrounded by elegance and luxury.  Roy’s offers both indoor and outdoor dining, the latter the only option our debonair dachshund The Dude would accept.  As usual he met with oohs and awws.

The Christmas menu featured three-courses from the daily menu.  That means bold Asian flavors and classic European techniques that define Roy’s Hawaii Inspired fusion cuisine not some holiday menu that veers away from what makes Roy’s uniquely special.  Among the special appetizers was lobster bisque (Maine lobster, Thai aromatics, hint of red curry and coconut milk).  We’ve had lobster bisque throughout New England and beyond, but we’ve never had lobster bisque like this one.  You might think Thai aromatics and coconut milk would counter or subsume the oceanic sweetness of the lobster.  Instead, the lobster seemed to sing under the influence of this inspired Asian fusion dish.  Lobster knuckles swam in the brackish-colored broth, each nearly as fresh as when caught off the cold waters of Maine.    Instead of croutons, we would have liked oyster crackers, but that’s a nit.

Lobster in Arizona?  Based on appetizers alone, you might think the delicious arthropod lives in the Salt River residents consider the lifeblood of the Valley.  In addition to the lobster bisque, lobster potstickers served with a spicy Togarashi miso butter sauce were my Kim’s choice.  The crescent-shaped potstickers were rather gaunt with very little lobster discernible. Fortunately the spicy Togarashi (a spicy Japanese mixture of seven spices) miso butter sauce and a garnish of Napa cabbage, julienne carrots, red bell peppers and citrus ponzu sauce saved the day.

Black cod, also known as “sablefish” and “butterfish” is a delicate, flaky fish with a rich, buttery flavor and silky sweet overtones. The miso glaze lends a savory-sweet element that pairs magnificently with the fish.  As complex as its flavors are, you might think Chef Yamaguchi would guard the recipe with his life.  Instead, you can find his recipe on the internet.    So how did the the “copy” compare with the original?  Chef Bladergroen didn’t read the recipe online; he learned it from Chef Yamaguchi and he learned it exceptionally well.  We couldn’t discern any significant difference in what remains my very favorite fish ever.  The only difference was in the accompaniment.  Roy’s rendition was served with baby bok chop and furikake rice (shaped like a maki roll).  Both were excellent, but that black cod was transcendent!

While my love for the bounty of the seven seas belies my having grown up in a landlocked state, my Chicago born-and-bred bride is almost exclusively a landlubber.  She wouldn’t have agreed to Christmas dinner at Roy’s had the menu not included a meat dish, specifically a grilled eight-ounce filet mignon (truffle onion Misoyaki demi-glace) served with mashed potatoes, a skewer of shrimp and grilled vegetables (baby carrots, asparagus spears.  Though filet mignon tends to be among the most tender of all cuts of beef, Roy’s version was so tender it fell apart if you looked at it the wrong way.  Because filet mignon has a milder flavor than other cuts, the demi-glace lends the same sweet-savory flavor profile of the black cod dish I revere so much.

Kaffir limes are an essential ingredient for so many authentic Thai dishes (such as Tom Kha soup and Panang curry).  The strong scented leaves of the kaffir lime have a lovely fresh lemony flavor and essential oils that perfume the air as you cook with them.   As often as we’ve had lime pie, it’s almost always been with small, spherical key limes.  We hadn’t considered that lime pie or tart could be made with kaffir. Roy’s kaffir lime tart (Graham cracker crust, Creme Anglaise) was at least the equal of the best key lime pies we’ve had in Florida and elsewhere.  It’s got just enough tartness to be purse your lips ever so slightly.  It’s rich, creamy and so limey.

Who would have thought we’d find a Hawaiian paradise on Christmas day in Phoenix?  Who would have known the Alaskan black code I fell in love with in landlocked New Mexico would be as wonderful as the original version concocted by a brilliant Hawaiian chef?