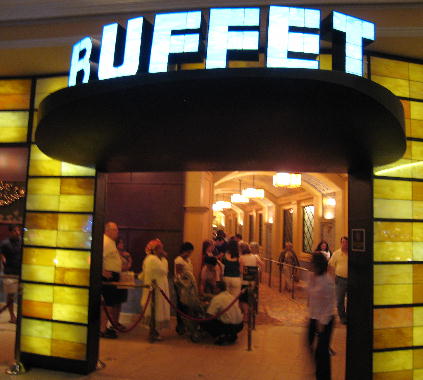 Comparing the Bellagio Buffet to the buffets proffered at other casino hotels isn’t quite akin to comparing a Bacchanalian festival to a swinish feeding troth, but it might be close.  That’s because the difference in quality between the Bellagio Buffet and its nearest competitor is several degrees of magnitude.

It’s the one buffet in Vegas in which you might actually see the gentrified and the affluent condescend to mingle with the rabble.  It’s also the one buffet in which some of the patrons don’t look like they parked their hay wagons in front of the casino and walked in.

Being the very best, the Bellagio Buffet seemingly brings out the best behavior among its dining patrons who at other casinos might jostle and push their brethren just like European tourists do (and by the way, some of them put the much-maligned and stereotyped “ugly Americans” to shame).

There are many other Vegas buffets which offer greater variety, but where the Bellagio stands out is in its lavish presentation of cuisine as opposed to chow, fine dining as opposed to smorgasbord and culinary creations as opposed to caloric caches.

While other buffets have action stations usually featuring thematic (such as seafood) or ethnic (Italian, Mexican and the like) foods, the Bellagio has a singular, continuous procession of wondrous indulgences along with detached islands of salads and desserts.

In no other Vegas buffet will you find barbecued wild boar ribs, chicken Wellington, leg of lamb and more–and that’s just during the lunch buffet.

The Bellagio Buffet serves nearly one million pounds of prime rib per year.  It serves more than five hundred pounds of seafood daily and it’s all flown in fresh daily from all over the world.  The lunch and dinner buffet serve ten different potato dishes.

The daily dinner bounty includes Alaskan king crab and other extravagances not available during lunch–and even that’s not as opulent as the buffet gets. Weekend gourmet buffets are even better while holiday offerings include Kobe beef.  Bacchus himself would be proud.

Every item we sampled save for the sushi (pre-made) has been good to very good. The beef in black bean sauce, one of the few Chinese entrees on the buffet, was among the very best we’ve had.  Ditto for the four cheese pizza and I can’t stop thinking about those barbecued boar ribs.

While other buffets might offer soft-serve ice cream, at the Bellagio, you might find soft-serve raspberry and peach sorbet and it’s as fresh and delicious as if plucked right out of nature herself.  The desserts are first-rate!

When you’ve had the best, why settle for the rest?  It will be hard to visit any other Vegas buffet after visiting the Bellagio.