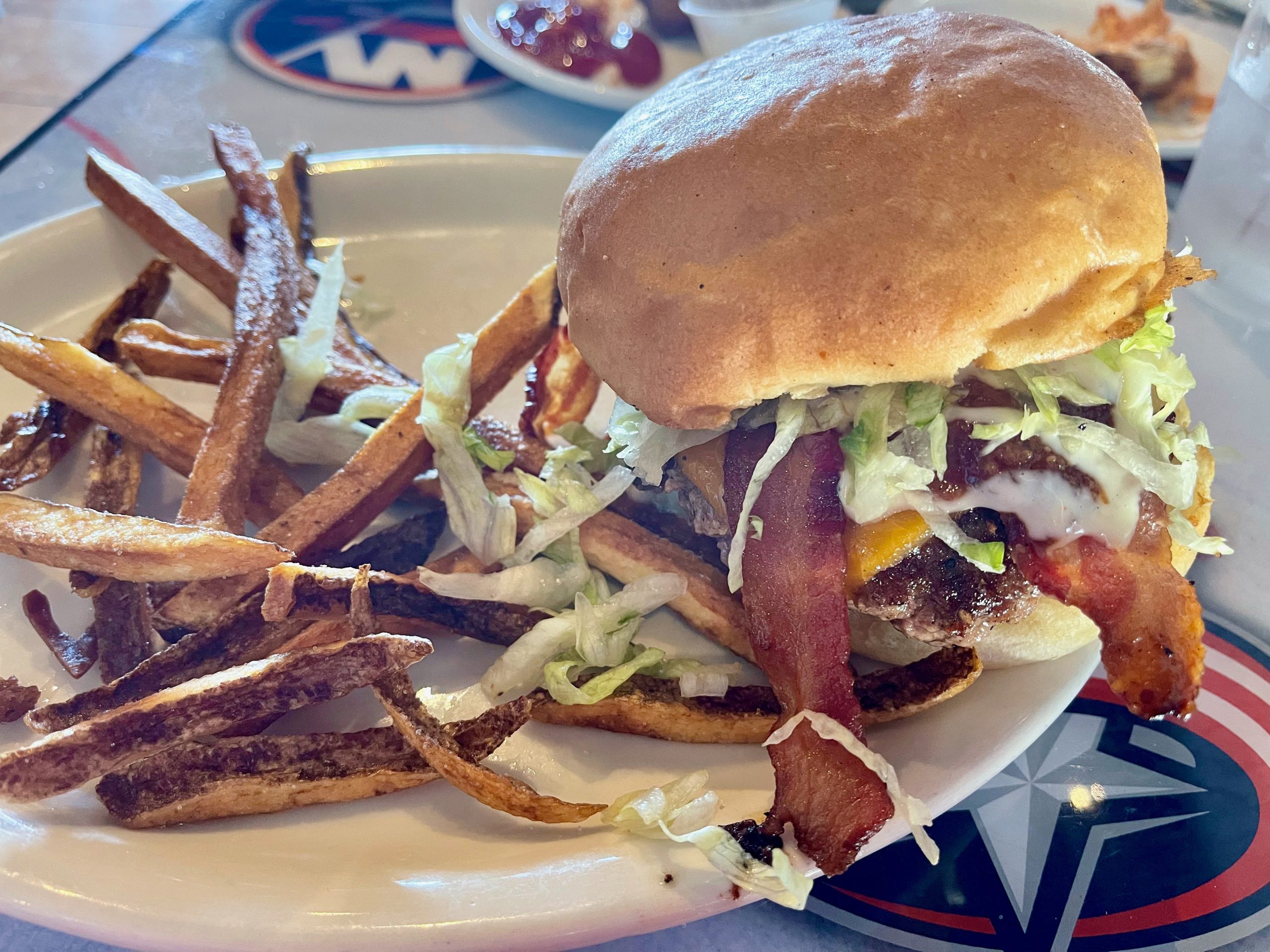 A 2016 online survey conducted by Statista asked 719 adult respondents “What is the maximum length of time that you would drive to a place to eat?” More than half (51-percent) of the respondents indicated they would travel 16 to 30 minutes to a restaurant. The limit for another 26-percent was 30 minutes to an hour.  Only five percent said they would travel more than one-hour.  Even the most prolific driving diners don’t have anything on David Schuler of Mississippi.  To sate his cravings for his favorite pizza in Massachusetts, Mr. Schuler drove over 1,400 miles and through 16 states.  Even that distance pales in comparison to humpback whales who travel as much as five thousand miles to get their fix of plankton, shrimp and salmon.

Now you know what my argument will be next time my Kim complains about my “end-of-the-Earth” drives to visit a restaurant we haven’t previously visited.  Her counter-argument usually involves “all the great restaurants within a couple miles” of our Rio Rancho home.  She obviously doesn’t enjoy drives of great distance as much as our debonair dachshund The Dude and his dad do.  On a lazy August Sunday morning I surprised her by taking her to an eatery almost exactly two miles from our home.  It’s not a new restaurant though it’s a place we hadn’t previously even heard of despite the proximity to our home.

Had owner Armando Martinez not created a post on Nextdoor, chances are we would never have heard of the Turquoise Desert Tap Room.  Armando not only introduced himself, he created immediate capital for his new venture.  He indicated the menu would be completely revamped and all meals would be prepared in a scratch kitchen.  Whetting neighborhood appetites even further, he spoke about Dulce Capital, his bakery and coffee shop in Santa Fe and his plans to add a location next to Turquoise Desert.  His coffee comes from a local roasters, one which boasts of all organic and fair trade coffee. He won my heart by promising to be a “local coffee shop and bakery,” emphasis on “local.” With all the coffee chains opening in the area, his words are music to my ears.

Armando and his family have lived in the neighborhood for years so they’re definitely invested in the area. Turquoise Desert is located at 4405 Jaeger Drive, N.E. Essentially it’s about a mile south of the confusing interchange between Highways 550 and 528. Look for the Defined Fitness and Dollar Tree on the west side of Highway 550.  Turquoise Desert had been open for only a few days when we visited, but it operated as if in business for years.  Like the ambassador he is for his tap room and restaurant, Armando visited tables to check in on guests and neighbors. The guest demographic included families, couples and groups of friends.

All the trappings of a tap room meets sports bar make for a welcoming ambiance that will appeal to a number of demographics.  Those of us who served our country will appreciate that the flag of our respective service hangs on the wall.  Flags of the United States and the great state of New Mexico are poised directly over the bar.  Sports fans will enjoy seeing the logo of their favorite professional sports teams under the acrylic tabletops.  The University of New Mexico Lobos are similarly honored.  Sports fans will also enjoy the big screen televisions positioned strategically throughout the dining room.

Everyone will enjoy the menu.  It’s not your typical bar fast food menu.  It’s the type of menu you’ll see at a restaurant.  Apps and Starters will get you started with seven items from which to choose, a couple of which are rather unique.  There are four salads and a sour-of-the-day if you’re not in the mood for an appetizer.  Burgers and Sandwiches constitute the largest section of the menu with a dozen options.  Lastly there’s a legitimate “Entrees” section that lists such tempting options as fajitas, fish and chips, fried chicken and a fried shrimp basket.

One of the more intriguing starters are buffalo chicken egg rolls (chicken, cream cheese, red hot slaw served with blue cheese or ranch dressing) proof that a creative chef can create egg rolls from virtually anything in the pantry or fridge.  It’s a good idea, but not quite as good as you might imagine.  The chicken and red hot slaw, on their own, would have been very satisfactory, but molten cream cheese just renders this appetizer rather dreary–and I’m a bona fide turophile prone to complaining about “not enough cheese.”  Neither ranch nor blue cheese dressing could do much to improve this so-so starter.

Much better are the Turquoise fajitas (your choice of chicken, beef or shrimp served with pintos, green cauliflower rice, tortillas and “all the fixings).  Those fixings were shredded Cheddar, lettuce, tomatoes, sour cream and guacamole.  In other words, the usual.  No matter what we add to fajitas what really matters is the protein of our choice and the green peppers and onions with which they’re prepared.  My Kim raved about both the caramelized onions and green peppers almost as much as she did about the beef and chicken.  The tortillas were of optimum size to support large scoops without falling apart.

Though there were so many other interesting options on the menu, sometimes you’re just in a burger mood.  The Turquoise burger (Cheddar, maple bacon jam, garlic aioli, bacon strips) is no ordinary burger–even though it’s not graced by New Mexico’s sacrosanct green chile.  Admittedly I’m a shill for maple bacon jam and its sweet meets savory properties.  This maple bacon jam is reminiscent of breakfast or more specifically maple syrup (on a stack of pancakes) and bacon.  Every component of this burger is complementary, a melange of ingredients that just work well together.  Maybe next time I’ll ask for green chile to confirm (as if that’s needed) that green chile improves the taste of everything.  Oh, the burger buns are sheer artistry–soft and delicious.  They’re baked in-house, a preview maybe of things to come when the bakery opens up.

My Illinois born-and-bred Kim has never been a fan of New Mexico’s official state vegetable.  No, not chile.  The other official state vegetable–our precious pinto beans.  That works to my benefit because (like every true nuevomexicano) I could eat pintos three meals and a snack a day.  Turquoise Desert’s pintos reminded me just what I love about pinto beans.  They’re creamy and earthy.  I should have swiped one of my Kim’s tortillas to form “New Mexican spoons” with which to eat those perfect pintos.  New to both of us (and something else my bride didn’t appreciate) was the cauliflower rice.  It’s somewhat mushy, but surprisingly flavorful.

As of our inaugural visit the only dessert being offered was cupcakes.  My Kim loved the freshness and general deliciousness of the chocolate cupcake topped with a mountain of buttercream frosting.  If it’s indicative of the pastries to which we’ll soon be treated at the bakery next door, we’ll be picking up dessert at this heretofore unknown to us restaurant.  Armando, your neighbors are anxiously awaiting the grand opening of that bakery.  In a Rio Rancho Observer article, Armando indicated the bakery and coffee house will offer brunch on weekends.  Should things go well for the restaurant, he also plans to invest in a BBQ smoker to expand the menu.