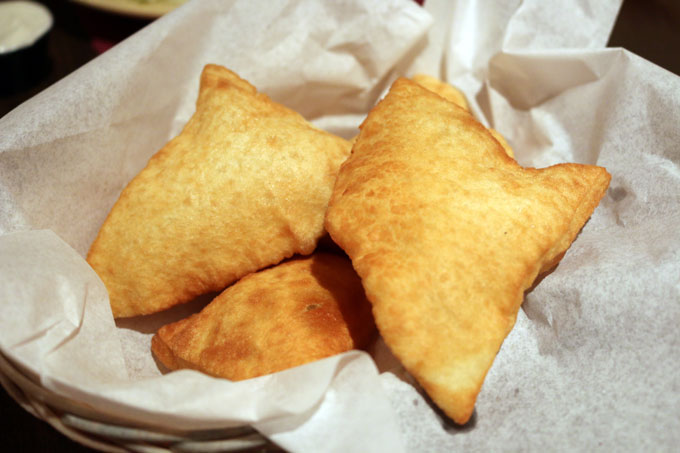 In 1706, a group of Spanish colonists were granted permission by King Philip of Spain to establish a new villa on the banks and in the valley of the Rio del Norte. The colonists chose a spot “in a place of good fields, waters, pastures, and timber, distant from the villa of Santa Fe about twenty-two leagues.” They named the new settlement La Villa de Alburquerque in honor of the Viceroy of New Spain, Fernandez de la Cueva, Duque de Alburquerque.” A portrait of el Duque de Alburquerque hangs prominently just above the mantle at Cervantes Restaurant & Lounge in the southeast quadrant of the city named for him. Though there is a lot to see throughout the restaurant, the portrait of El Duque is the cynosure to which all eyes are inevitably drawn, a commanding presence with a quiet air of dignity and regal bearing.

One wonders what El Duque de Alburquerque would think of the city bearing his name and of the lively cuisine that prompted Livability.com to name that city one of America’s “10 most surprisingly vibrant cities for foodies to flex their taste buds” and for the Huffington Post to declare it “one of the ten best cities for local food.” El Duque would certainly marvel at the profligate portions served at every meal and of the rotundity of many who partake of those portions.” An aristocrat renown for the luxury and magnificence of his administration, El Duque would probably take great self-aggrandizing pleasure at the portrait hanging at Cervantes, but it’s likely the food would cause him severe gastronomic distress. He would certainly not be used to the richness and piquancy of the ingredients and might wonder what manner of alchemy is searing his tongue and saturating his brow.

Note: It was during my initial visit to Cervantes in 1979 that I was told the portrait hanging over the mantle depicted El Duque de Albuquerque. During my most recent visit in July, 2016, our server related that no one really knows whose countenance hangs on the wall. She joked that it could be a portrait of “just about anybody.” Whether you choose to believe that distinguished gentleman who’s presided over every meal at Cervantes is El Duque or just some noble looking dude won’t add to or take away from how much you’ll enjoy a meal at this legendary eatery.

Although Cervantes Restaurant and Lounge is hardly contemporaneous with El Duque de Alburquerque, it is one of the city’s venerable dining institutions. Hundreds of Albuquerque restaurants have come and gone in the three and a half decades since Roberta Finley launched her restaurant in 1976. Still, this Kirtland Air Force Base area institution continues to thrive against increasingly formidable competition, outlasting many of the anointed “flavor of the day” restaurants which burn hot at the start, but fizzle out over time.

There are many reasons Cervantes has not fizzled out like so many of its competitors and one of them is because it still burns red hot—literally. In the early 80s, Cervantes was where to go if you needed a chile fix, the hotter the better. The chile was incendiary, but addictively so. While stationed at Kirtland, we used to take the dreaded Inspector General team to Cervantes so we could watch them sweat in much the same way they probably delighted in watching us sweat their white-glove inspections of our mission readiness.

Today Cervantes’ chile isn’t nearly as piquant as the chile burned into my memory engrams (not to mention my taste buds and tongue), but it seems to be much more flavorable—especially the red chile. For the non-fire-eaters among us, the incendiary heat of that chile may have detracted from the flavor appreciation that just isn’t possible when your mouth is burning. For those of us with asbestos-lined tongues, eating that chile was a rite of passage, a demonstration of our manliness (being the more mature gender, women need no such affirmation). In any case, the red chile at Cervantes remains very good. It’s very healthy, too. In keeping with today’s healthier lifestyles it is made with less sodium, fewer calories and no fat or cholesterol while retaining the richness of traditional flavors. Cervantes food products contain no artificial preservatives, chemical additives, fillers or animal products.

Cervantes Food Products has become synonymous with the restaurant. The Food Products Division was born from the family’s commitment to preserving heirloom family recipes, many of which are more than a century old. Heart-healthy gift baskets for all occasions are available through the Cervantes Web site. They’re especially popular with expatriated New Mexicans craving a chile fix. Several Cervantes products have earned a multitude of Scovie awards over the years. Named for Wilbur Scoville who pioneered the rating scale for piquancy, the Scovie award was created by Albuquerque resident Dave DeWitt, founder and co-publisher of Fiery-Foods & BBQ magazine. Every year as many as 800 products from around the world compete for these coveted honors.

Cervantes remains, at heart, a much loved restaurant that has served three generations of loyal patrons. Active duty and retired Air Force personnel and the civilian workforce from nearby Kirtland are especially loyal, constituting a significant percentage of the restaurant’s daily visitors. No doubt they still bring the dreaded Inspector General for a meal or two, perhaps no longer to make them sweat from the piquancy of the chile, but to soothe the savage breast with New Mexican food with charms to do so.

The dining room at Cervantes is in two levels with a lower center section flanked on both sides by seating for lesser numbers. Tables in the lower center section accommodate larger parties. The ambience is a sort of Spanish Gothic meets Mexican traditional. Chandeliers suspended from the ceiling provide low-light comfort that just seems appropriate considering the dark woods and especially the crossed Spanish swords and shields festooning the walls on either side of the fireplace where el Duque de Alburquerque appears to look over the restaurant. Colorful Mexican blankets are strewn about judiciously.

A basket of chips and a bowl of salsa are presented with your menu. The first round is complementary, the second (and likely third and forth) will cost you a pittance. The chips are unsalted, but large and crisp, perfect for Gil-size scoops of salsa. The salsa is gloriously red, constructed of fresh ingredients (garlic, tomatoes, onion and I believe both jalapeno and green chile). It is of medium piquancy with just enough bite to get your attention.

17 July 2016: Marinated overnight then slow-cooked until so tender it’s falling apart, Cervantes’ carne adovada is among the very best in Albuquerque, melding the exquisite flavors of New Mexican red chile, oregano and garlic with pork. Unlike some restaurants, Cervantes doesn’t adulterate their carne adovada with cumin or an excess of Mexican oregano which can make the dish acerbic. Instead, the marinade accentuates the marriage of pork and chile, imparting flavors that warrant reverence. My Kim enjoys the carne adovada with a fried egg over easy on top. A runny yoke atop the crimson carne may sound heretical, but the resultant flavors are quite good.

Huevos Rancheros with Carne Adovada is a popular way for your taste buds to pay proper homage to Cervantes’ carne adovada. This plate includes two eggs any style, beans and rice on a flour or corn tortilla. The beans are excellent, refried with melted white Cheddar atop. The Spanish rice is moist and delicious with bits of green pepper which enliven the rice. It’s the carne adovada which stands out. Unfortunately there isn’t much of it–enough to make you crave more of it, but not enough to sate your immediate need for its delicious qualities.

17 July 2016: Another long-time Cervantes favorite is the enchilada plate, a plate of New Mexico enchantment comprised of your choice of two or three rolled enchiladas–two stuffed with cheese and one with ground beef. You can also have them stuffed with carne adovada or chicken. The enchiladas are great with both green and red chile and with a fried egg on top, but for my money, the red chile accentuates the other ingredients best. As with other plates, the enchiladas are served with refried beans and Spanish rice. Skip the Spanish rice and ask for two portions of the beans. They’re among the best in town.

The sopaipillas are a true contender for “best in the city” honors. These are puffy pillows of fried dough without any of the greasiness sopaipillas tend to have. Cervantes also uses real honey (local) instead of that honey-flavored syrup some restaurants serve. Don’t save them for dessert; polish them off as soon as they arrive at your table when they’re hot and steam wafts upwards as you pull them apart to form a pocket for the honey.

17 July 2016: Even after polishing off the sopaipillas with honey, do yourself a favor and order either natillas or flan for dessert. The natillas are exemplars of what natillas should be–a creamy custard made with milk, eggs, sugar, vanilla and cinnamon. Ask for lots of cinnamon, an ameliorant which imbues the natillas with a fragrant bouquet you’ll enjoy as you’re spooning up the light, delicate (never lumpy at Cervantes) natillas.

Cervantes Restaurant and Lounge is somewhat off the beaten path for diners who live outside the city’s Southeast quadrant, but thousands of loyal local patrons find their way to this popular favorite for New Mexican food the way it’s been made for generations. It’s one of the very best, most traditional New Mexican restaurants in the city of El Duque de Alburquerque.