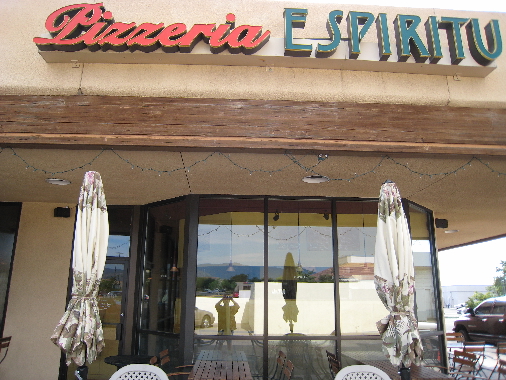 The name Pizzeria Espiritu reflects the deep-seeded faith of its founder and owner Tom Berkes, the liturgy and music director at St. Joseph’s Church in Cerrillos since 1990. A liturgical music composer, Berkes plays guitar, piano and harmonica for the small Catholic parish on the Turquoise Trail.

Berkes is probably more well known for the fun and festive pizzeria he and songstress Jewel Sato founded in 1997, a restaurant which has garnered recognition as one of America’s Hot 100 Independents by Pizza Today Magazine, a respected trade publication.

A self-professed Renaissance Man, it is Berkes’ goal to create a fun atmosphere where people can come in and enjoy themselves while they partake of good food. To that end, he has created a beautiful space which, aside from the frontage’s stucco exterior, is so un-Santa Fe-like.

In its exterior, Pizzeria Espiritu looks more like a restaurant you’d find in a larger, more cosmopolitan city, maybe even a city in Italy. The centerpiece, a fourteen foot original oil painting by artist Gary Larson, hangs not on one of the restaurant’s walls but on the ceiling.

That painting is based on Michelangelo’s “Creation of Adam,” a fresco on the ceiling of the Sistine Chapel painted in 1511. The painting illustrates the Genesis story in which God the Father breathes life into Adam, the first man. More of Larson’s works hang the traditional way–on the walls of the inviting and pleasant dining space. It is gallery quality work.

Despite a sophisticated ambience that includes an Italian-style statuary fountain, Pizzeria Espiritu remains at heart, a neighborhood pizzeria, the type of restaurant in which patrons of every walk of life will feel right at home. That’s pretty much the way Berkes intends his Old-World Eatery to be.

The menu features fresh salads, sandwiches (lunch only), pastas from Old-World recipes and stone hearth fired custom-made pizzas. Fine wines as well as domestic, imported and microbrew beers are also available as is a nice selection of desserts. You won’t find lasagna, manicotti, ravioli or many of the other entrees served at other Italian restaurants.

Instead, Pizzeria Espiritu features pasta entrees crafted with your choice of Angel Hair, Fettuccine, Linguine, Penne, Spaghetti or Tortellini which can be topped with any one of several made fresh daily sauces: the House Marinara, Alfredo, Pesto, Three Mushroom, Primavera, Meat, Seafood Marinara or Linguini and Salmon.

For a pittance, you can add to your entree either grilled chicken, sautéed shrimp, sautéed salmon or Italian meatballs. With options like this who needs lasagna.

If it’s the quest for delicious pizza that prompts your visit, you’ll be well pleased. It takes some doing for the pizza to match the intoxicating aromas emanating from the kitchen–aromas of simmering, garlic-infused sauces and yeasty bread–but Pizzeria Espiritu does it.

Your pizza can be either a thick, deep-dish crust or a flaky thin-crust and you can order one of the creative pies on the menu or customize a pie with your favorite toppings. In either case, the wait is almost painful (up to 45 minutes for a deep dish pizza) courtesy of the heavenly aromas surrounding you. Fortunately, a small plate of focaccia bread and a seasoned olive oil dip mitigates the pain of waiting somewhat.

The pizza is definitely worth the wait, but be careful not to attack it right off as it comes out of the oven steaming hot. The Sicilian Sausage pizza, a pie designed to be served deep-dish but which can be ordered thin crust, is redolent with flavors and covered in a blanket of mozzarella with Italian sausage begging to break out.

Unlike at many pizzerias, the tomato sauce at Pizzeria Espiritu isn’t baked in completely into the bread or cheese where it’s lost among the other flavors. It doesn’t run off the pie either. Instead, there’s a perfect amount of sauce–enough to be discernable, but not enough to dominate the pizza either. It’s a perfect complement to the other ingredients.

Similarly, the sausage has just the right amount of fennel so that its flavor sneaks across instead of tasting like licorice. At thin-crust, the dough isn’t cracker-like, but it’s nearly stiff enough to be picked up from the edges without all the ingredients drooping off the pie. The bottom and sides show a good amount of char.

The Greek Pie–tomato sauce, Feta cheese and mozzarella with Kalamata olives, spinach and red onions brushed with olive oil–is food fit for the Gods of Mount Olympus. It is one of the more flavor-rich Greek style pizzas we’ve had.

Until 2001, Berkes also owned and operated Espiritu Canyon Road, a very popular restaurant and nightclub which was forced to close by a Santa Fe city ordinance. Some still say it took the heart and soul out of Canyon Road. Certainly it took its spirit.