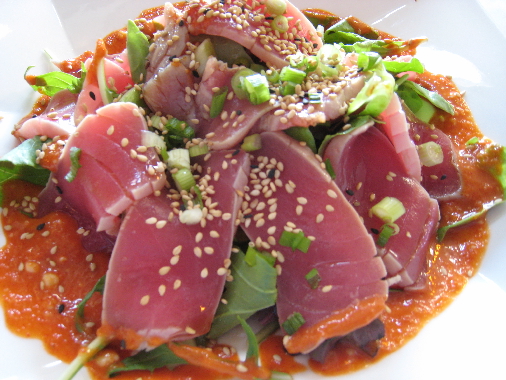 The Chinese philosophy of yin and yang posits a dualistic universe in which both sides of opposite forces are each part of a whole and work together. Examples include good and bad, male and female, light and dark and positive and negative.

These opposing forces are equal and necessary for harmony. A dualistic nature is what we uncovered at Japengo Sushi–in this case the opposites being truly sensational, saucy salads and sushi sadly at the level of mediocrity.

Launched in August, 2004, Japengo is one of the very best restaurants on what has become restaurant row just off I-25–despite the sushi. Its proximity to the Century Rio 24 movie theater has made it a popular dining destination among movie goers. The quality and freshness of ingredients will make it a destination to which I’ll return.

Japengo might best be categorized as contemporary Japanese with a slight fusion Asian twist. Its relatively minimalist decor is modern, almost industrial. The wait staff is courteous and professional.

The menu includes an array of traditional Japanese entrees (such as noodle bowls topped with tempura or chicken) as well as dishes which push the envelope insofar as tradition. Plating is pleasing to the eye and the palate. On any given night, the music piped in through the restaurant’s speakers might be contemporary American jazz, but it feels oddly in place here. That might be because Japengo is a dichotomy, straddling the fine line between traditional and contemporary.

An appetizer of fresh, lightly battered green chiles deep fried in tempura is a good introduction to an innovative menu sure to appeal to discerning diners. It is served with a very light tempura and soy sauce.

Another interesting appetizer (at least as far as its spelling is concerned) is age cyoza, a deep-fried pot sticker prepared in a wrapper just slightly thicker than a wonton. At most restaurants, the spelling of this popular starter is “gyoza.”

Gyoza actually originated in China and was introduced to Japan in the late 17th century. At Japengo, the cyoza are stuffed with ground pork, chives and cabbage. Despite the deep-frying, they are surprisingly moist with slightly crunch edges. They are served six per order.

Another great way to start your meal is with a salad appetizer called Japengo Ceviche which isn’t quite antithetical to the Mexican version, but vastly different.

Like Mexican Ceviche, it features seafood (various types of fish and shrimp) marinated and cooked in citrus juices, but you won’t find tomatoes or garlic on Japengo’s version. Instead you’ll find crisp lettuce of various varieties, thankfully not including the ubiquitous iceberg lettuce inferior restaurants serve. The greens are marinated in the tangy citrus dressing which invigorates all the ingredients in a memorable palate pleasing manner.

The ginger-based dressing served with the lunch salads is also exceptional, perhaps the very best of its kind we’ve had in Albuquerque.

The slightly piquant, slightly tangy dressing on the Tuna Tataki made an exquisite entree supremely sublime as it charged up a generous amount of every so slightly seared and perfectly pink tuna. Unlike other piquant foods, the only “burn” you might feel will be on your lips where the citrus and chili combination will linger for just seconds after each bite.

While seared tuna has become de rigueur on menus throughout the country, very few restaurants prepare it exceptionally well. Japengo Sushi is one of those.

You’ll hit the quadrafecta of outstanding dressings with the piquant dressing on the Viagra Salad (pictured above), a peppy salad of ultra-fresh greens and raw fish. It’s got restorative properties that may tantalize your palate as opposed to other parts Viagra typically addresses.

Leaving lettuce laden entrees, you might want to try one of the restaurant’s luncheon or dinner specials, all of which are served with a house salad, white rice and miso soup. Other entrees include a California roll, shrimp tempura, crabby wonton and rice.

The lightly salted miso soup is a rich, delicious broth, the type of which are so comforting particularly on cold winter nights.

Dip your tempura vegetables into the house salad’s ginger dressing and you may never want teriyaki again. Lightly battered in tempura batter, the inherent flavor of each vegetable isn’t lost in either the dressing or the batter. If you’ve ever dined at restaurants in which you can’t tell the difference between tempura battered zucchini and tempura battered shrimp, you’ll be happy to hear that’s not the case at Japengo.

The spicy pork loin, a popular dinner entree, is prepared Yakiniku style which means it’s thinly sliced, fried on a skillet or grilled and marinated. In this case the marinade was a sweet, spicy sauce similar to Korean bulgogi. We were thoroughly impressed with the quality of the pork which didn’t have a smidgeon of sinew and was as tender as a bird’s heart. It is topped with smoked almond shavings which complement the pork wonderfully.

As for the sushi, we found most of the fish unfailingly fresh (a commonality among the restaurant’s offerings) but the maki style rolls were cut too thick and the rice disintegrated as soon as we dipped our sushi into a very weak Wasabi.

One of the rolls included a low-grade fish roe with the consistency of pop-rocks, the child’s candy that pops in your mouth. The sushi is among the most expensive in town with several rolls approaching the $15 mark. Better sushi is available elsewhere, but for a sensational salad experience in a fun, festive and thoroughly contemporary, Japengo Sushi rocks!