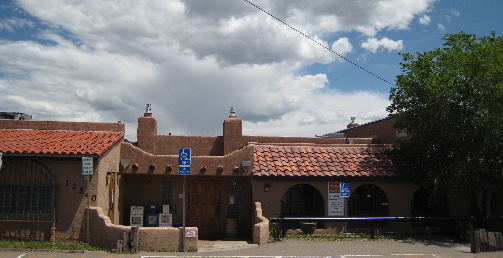 Perhaps the most ubiquitous symbol of the ancient Anasazi culture is Kokopelli, a hump-backed, flute playing figure commonly found in petroglyphs and pottery throughout the Southwest and as far away as South America.

Regarded as the universal symbol of fertility for all life–be it crops, hopes, dreams or love–Kokopelli might have been relegated to obscurity to all but cultural anthropologists, however, with the emergence of Santa Fe’s modern culture, he has become universally known.

Today Kokopelli paraphernalia has come to symbolize the kitsch and excess of Santa Fe style. Sure enough, Kokopelli’s Restaurant and Cantina has several Kokopelli figures and images strewn about.

It also has some of the best fajitas in the Albuquerque area. By and large the skirt steak served on most fajitas is as tough as a leather belt and the accompanying green and red peppers are drastically under-cooked. Not so at Kokopelli’s where the marinated beef was melt-in-your mouth and delicious.

Not quite as good were the juevos rancheros which I ordered with both red and green chile. The green chile was wholly innocuous while the red chile had perhaps the kick of a legless mule.

The best item on that traditional breakfast concoction were the cottage fries which were cubed potato perfection. We shared an appetizer called espinaca con queso and chips, a spicy dip made with jalapeno jack cheese and spinach. It was probably not as good as traditional chile con queso.

Kokopelli’s has an interesting menu which begs return visits, but not until we visit the many other intriguing new dining establishments on what Duke City residents refer to affectionately as the “back side.”