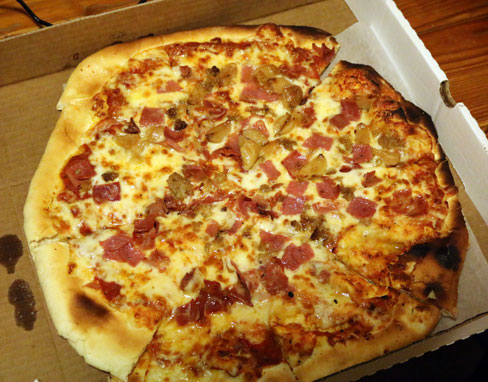 “The qualities of an exceptional cook are akin
to those of a successful tightrope walker;
an abiding passion for the task,
courage to go out on a limb
and an impeccable sense of balance”
– Bryan Miller
Former New York Times food critic

The qualities of a truly exceptional cook do not include plying his or her trade under the spotlight of a heavily trafficked metropolitan restaurant frequented by the glitterati and anointed by the cognoscenti or the Food Network. Truly exceptional cooks can shine brightly even outside the big city and media spotlight. Some of the very best cooks and chefs in the fruited plain are relatively unheralded by the teeming masses and remain undiscovered by the the saccharine television food programs. Some of them toil far from the well-beaten-and-well-eaten path and care more about the craft than they do the pursuit of celebrity.

Truly exceptional cooks shine so brightly that their reputations for exceedingly high standards and inventive cuisine precede the media stampede. The very best among these exceptional chefs maintain those standards after they’ve been discovered. Though they may appreciate any newfound attention, their focus remains on proving themselves with every single meal and to every single guest. These are the truly exceptional cooks, the ones whose passion for the task shines through!

One such chef is Byron Harrel, co-founder (along with then wife Jessica Mackenzie) of Bella Luca in Truth or Consequences, New Mexico who plied his craft among small town friendliness instead of the dog-eat-dog world of the fishbowl (wow, two bad metaphors in one sentence). Before settling in relatively sleepy T or C in 2007, he plied his craft under the bright lights and glitz of the Signature at MGM Grand in Las Vegas, Nevada. Unlike the proverbial light under a bushel basket whose brilliance remains hidden, his restaurant quickly earned a reputation as a hidden gem. Snowbirds, tourists and those of us who love T or C’s salubrious waters began spreading the word about this oasis in the desert.

Chef Harrel has moved on, but the restaurant hasn’t skipped a beat with Jessica MacKenzie at the helm. She has brought in credentialed chefs who can execute to the vision she and her then-husband established when they launched their restaurant. Fittingly Bella Luca translates to “beautiful light” because that’s precisely what this metropolitan caliber Italian restaurant is. It’s the brightest culinary shining light in a city named by Budget Travel in 2008 as one of the “ten coolest small towns” in America, an honor accorded to cities with fewer than 10,000 people—but which can rival larger cities when it comes to good food, culture, and quality of life.

Beautiful light might not be a term you’d ascribe to Bella Luca’s minimalist ambiance. From the outside, there are few telltale signs (except maybe the crowded parking lot) as to why Bella Luca has become one of the highest regarded Italian restaurants in New Mexico. If your expectations are for a swanky fine-dining interior, you won’t find that either. Instead, Bella Luca is one large dining room whose cynosure is fittingly a brightly illuminated open kitchen. The dine-in experience includes painted concrete floor, seating that is more utilitarian than it is comfortable and north-facing picture windows with not much of a view.

Located in the historic bathhouse district, the restaurant is one block west of Broadway and within easy sauntering distance of the healing waters. In terms of ambiance, Bella Luca might be antithetical to most foodie’s conception of a fine-dining quality Italian restaurant, but then it’s conceivable few people even notice their surroundings when they’re raptly enjoying their meals. Admittedly, my inaugural and second visits to the beautiful light were to pick up dinner and take it back to our room at the Fire Water Lodge. Eating out of biodegradable to-go boxes with plastic utensils is hardly the way you’d want to first experience Bella Luca, but the fact it still impressed us speaks volumes about this Italian idyll.

In terms of a holistic dining-in experience, our inaugural visit was wholly unlike that of Larry McGoldrick, the professor with the perspicacious palate, who called his first meal at Bella Luca “the best dining experience I have ever had in New Mexico.” Another friend and fellow foodie Ryan “Break the Chain” Scott places Bella Luca in rarefied company among the very best Italian restaurants in New Mexico. Local IQ publisher Kevin Hopper may have given the restaurant the ultimate compliment in calling it “a chef’s restaurant.”

Because it is a chef’s restaurant, Bella Luca won’t compromise on quality. All dishes are prepared from scratch, employing Escoffier cooking fundamentals. The focus is on taste and balance of flavor, using pristine, organic ingredients to enhance the individual flavors of each element. They procure ricotta from New York City for recipes which call for it. Whenever possible Café Bella Luca serves organic produce and uses “non-treated” chicken, wild caught seafood (flown in daily) and Colorado grass fed beef. The quality shows.

16 June 2012: Sophia Loren, the ageless movie siren and perhaps the most voluptuous septuagenarian in the world, once said “everything you see, I owe to spaghetti.” Certainly genetics and portion control helped, too, but perhaps her point is that spaghetti has had a ubiquitous presence on her diet as it does for many people. Spaghetti is something my Kim loves, too, leaving the “experimenting” to me. The spaghetti at Bella Luca is among the very best we’ve had in New Mexico. The meatballs certainly are. Four of them are served on the plate, each large and meaty. The spaghetti sauce is redolent with Italian seasonings and applied parsimoniously enough for you to enjoy the pasta. It’s the Italian way.

16 June 2012: It’s the chef’s way to take creative liberties with traditional entrees. The results are often brilliant. Take, for example, the braised short rib in demi-glaze over gnocchi, a dish pitting textural and flavor contrasts against each other in a way that differences meld into a superb coalescence. The gnocchi are delightfully uneven dumplings of deliciousness, usually signifying a hand-made approach. Each gnocchi is close-your-eyes-and-swoon light on the tongue, as smooth and soft as pillows. The braised short ribs are melt-in-your-mouth good.

21 December 2015: Wood-fired pizzas are created on one of the most attractive pizza ovens in New Mexico. This fabulous forno is adorned with a mosaic displaying an assiduous tree. Fittingly the pizza is equally attractive, not that you’ll appreciate its aesthetic qualities for very long. Specialty pizzas (twelve- or fourteen-inches) and calzones are available for both lunch and dinner. There’s a pizza for every taste, including a vegetarian-friendly pie. If you can’t find one that meets your exacting specifications, you can build your own. The Capone (Red Sauce, Pancetta, Salami, Prosciutto, Sopressata, Capocollo, Sausage) is certainly among the best pizzas in Southern New Mexico with its meat-lovers ingredients in perfect proportion to a tangy red sauce.

16 June 2012: Dessert options include tiramisu and other traditional Italian favorites, but on a sweltering summer day after soaking in a tub of geothermal hot mineral waters, you can’t beat sorbet and gelato, both made on the premises. During our inaugural visit, we enjoyed prickly pear and raspberry, both of which taste as their named ingredients should taste and both of which are smooth, delicate and absolutely delicious. It was lemon, mango and strawberry sorbet which captivated our affections during our second visit some eighteen months after our first. This stuff is addictive!