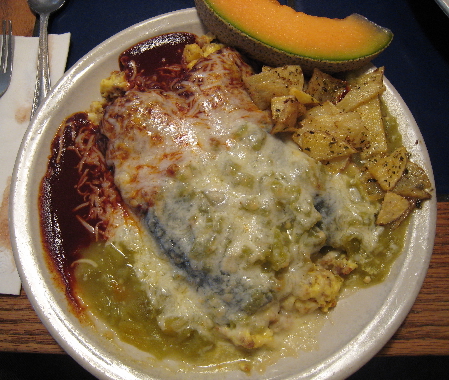 1974, Mexico’s Nobel laureate Octavio Paz wrote that “the Mexican people, after more than two centuries of experiments, have faith only in the Virgin of Guadalupe and the National Lottery.” Though perhaps not to the same degree of reverence as people of Mexican descent have for Our Lady of Guadalupe, many diners literally make pilgrimages to Santa Fe’s Guadalupe Cafe. You might say they trek to this beloved institution with a type of fervor which could be considered almost spiritual.

The Guadalupe Cafe, long removed from Santa Fe’s Guadalupe District and Guadalupe Street, does indeed inspire a fierce devotion. It is one of the most popular restaurants in Santa Fe, a venue often included in discussions about the best New Mexican restaurants in Northern New Mexico. It’s not uncommon to find yourself seated next to families who drove from Albuquerque or Taos (as has been our experience) just for breakfast at this institution. It’s not uncommon for tourists to make this the first restaurant they visit when they return to Santa Fe (and the City Different always inspires return visits).a

During a return visit to Santa Fe for her Tasty Travels show, the effervescent kitchen diva Rachael Ray touted the Guadalupe Cafe as “no more affordable way to wake up your taste buds Santa Fe style.” A New York Times travel writer who’s obviously spent quite a bit of time in Santa Fe writes, “when I want New Mexican food, I go to this restaurant, and like many Santa Feans, I go there often.” Gayot.com, the self-styled “guide to the good life” proclaims the Guadalupe Cafe “one of Santa Fe’s most beloved restaurants.”

Within easy walking distance of the “Roundhouse,” the New Mexico state capital building, the Guadalupe Cafe is frequented by the state’s power brokers (especially when the legislature is in session), some of whom might be seen rubbing elbows with part-time Santa Fe residents who ply their thespianic trades in Hollywood.

It’s well established that the Guadalupe Cafe is loved by both locals, politicians, tourists, stars and food writers, but what makes it so special? Without a doubt, it’s a time-tested and proven formula that hasn’t changed in more than three decades. When Isabelle Koomoa launched her iconic restaurant, her dream was a “from scratch” restaurant in which everything humanly possible is made from scratch on the premises. She’s been faithful to that recipe for success and it’s paid off. It’s probably just as important that the recipes used in the kitchen are inspired (gourmet New Mexican at its finest) and that service is attentive and friendly.

The term I’ve most often heard or read to describe the Guadalupe Cafe is “casually elegant.” That fits. Housed in a light adobe hued stucco edifice, the restaurant imparts a sense of hominess as it bids guests welcome with its warm colors and heavily trodden oaken floors. There are several dining rooms whose walls are festooned by Southwestern art, including portraits of John Wayne and other Western glitterati. Nichos include folk art such as ceramic pigs (no lipstick) or Catholic iconography such as San Pascual, the patron saint of kitchens.

The preferred venue for dining, weather permitting, is the outdoor patio from which guests can check out passers-by on Old Santa Fe Trail. In most cases the guests themselves–an eclectic mix of starched-shirt white-collar employees; tatooed, under-dressed Bohemians and nattily attired tourists–make for pretty interesting people watching, too. When wind or cold call for a surcease in outdoor dining, it’s nice to know you can retreat indoors where kiva fireplaces await.

The menu is expansive and awash with creative departures from traditional New Mexican recipes. You might say New Mexican entrees are extended beyond the ordinary into the inventive realm. Even traditionalists will quickly forgive those departures because the resultant entrees are just so good (and besides, they don’t involve the use of cumin).

Santa Fe is not only the state capital. It is undoubtedly the breakfast capital of New Mexico, if not the entire Southwest. The Guadalupe Cafe and its eye-opening menu is a great way to start the day. The coffee is salubrious with its steamy fragrance and soul-warming heat, but my preference is for the restaurant’s unique hot chocolate. It’s served in a beverage glass instead of in a mug and the glass is lined with chocolate syrup which melts into the frothy hot chocolate to further sweeten it. It’s an instant cure for cool morning blues.

Generating even more heat is the chile which has a well-deserved reputation as among the very best in town. It’s a wonderful chile–pleasantly piquant, deeply earthy and perfectly seasoned. Some critics warn that the chile can be hot and the chef won’t put it on the side for you, but it’s a chile most locals should be able to handle easily.

One of the best ways in which to experience that chile is with a breakfast burrito (if it’s not the official state breakfast food, it should be) and the Guadalupe Cafe’s is one of the best in town, but other chile laden items make it worth passing up that great breakfast burrito. One such item are the Casey Enchiladas, two rolled blue corn tortillas with scrambled eggs, sausage and cheese served Christms style (with both red and green chile). This entree is served with home-cut potatoes and your choice of toast (sourdough or cinammon bread) or muffin.

The red chile definitely packs a punch. It is a deep red chile and it’s thick and flavorful. The green chile is more subtle, a neon green colored sauce with plenty of flavor. and fragrance. Both red and green chiles are absolutely delicious, perhaps the inspiration for the state legislature to declare an official state question (red or green?). The home-cut potatoes are sliced thin and seasoned to perfection.

Visitors concerned that chile might scald their tongues or cause gastrointestinal distress can still find an array of delicious offerings on the menu. One popular breakfast entree is the Santa Fe breakfast crepe made with a whole wheat batter and grilled tortilla slathered with low-fat yogurt and topped with fresh fruit and homemade granola. It is very popular among health-conscious diners.

Better still, so they can tell friends and colleagues back home that they partook of an exotic New Mexican treat, visitors should try the blue corn pinon nut bread French toast. The bread is sliced thick and cut in half diagonally. A full-order includes two slices while a half-order is a single slice, but is still big enough to share. Like New Mexico’s famous blue corn atole pinon pancakes, it’s uniquely ours.

If the only sweet thing with which you want to start the day is a good morning kiss but you don’t want overpowering chile, one option are Guadalupe Cafe’s migas. Migas are a traditional Tex-Mex breakfast dish originally crafted as a meatless dish for Lent. The Guadalupe Cafe’s rendition consists of scrambled eggs with torn ribbons of trisp tortilla chips, scallions, cheese and chile throughout. Although the menu indicates the migas include chile, it was barely discernible. Perhaps the chile is in the salsa (which is pretty darn good, by the way). This version of migas would please the most persnickety of Texans.

I mentioned earlier that many breakfast items come with your choice of toast or muffin. The toast is fabulous. It’s thickly sliced and pillowy soft, toasted ever so slightly and served with melted butter and something that looks like ketchup, but which has the fruity deliciousness of strawberry without cloying additives that sweeten or thicken it artificially. Both the sourdough and cinammon breads make for excellent toast.