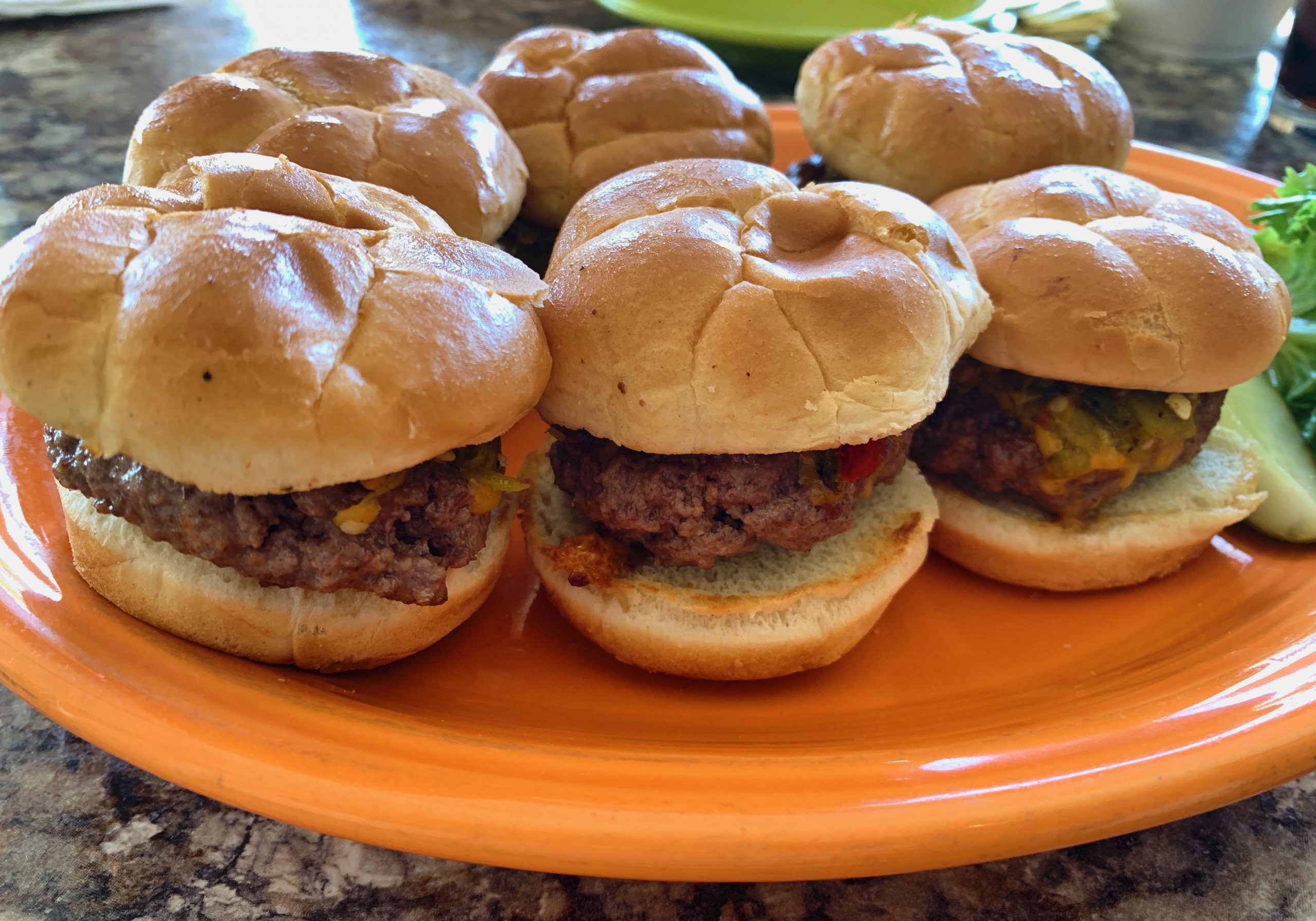 Céad míle fáilte, an Irish greeting meaning “a hundred thousand welcomes” preempts any menu listings at O’Hare’s Grille & Pub. At times, especially during happy hour and before Covid, it seemed a hundred thousand patrons crammed into this popular Irish themed pub.  Frequented as much (if not more) for its quality cuisine as for its libations, this pleasant pub is renowned among foodies for its desserts, Irish entrees and a chef staff’s willingness to depart from conventional pub foods into the realm of gourmet cuisine of various ethnicities.

Serving the City of Vision since 1996, O’Hare’s has survived an onslaught of interlopers in a very competitive  market.  One of the reasons for its success is continuity.  Founders Michael and Diana Hughes and owner-chef Steve Gallegos wanted to open a neighborhood grille that offered amazing food at reasonable prices, a “Cheers” like atmosphere where locals could come to get the beverage of their choice among friends.  There haven’t been a significant number of changes to the menu over the years.  “Why mess with a good thing” seems to be the operating philosophy here.  For many Rio Rancho residents, there’s a comfort level in knowing that you can visit your favorite dining establishment and know exactly what’s on the menu.

They know that they can visit O’Hare’s on Thursday for Dublin pot roast in natural jus served with roasted potatoes or an open-faced meatloaf sandwich on grilled French bread.  Daily specials live up to their name.  One of the most special days of the year for any Irish pub is St. Patrick’s Day.  O’Hare’s goes all out with three Emerald Isle favorites: corned beef and cabbage, shepherd’s pie and Irish stew (made with Guinness, of course).

O’Hare’s uses three words on its well-maintained Facebook page to describe itself: gulp, gorge and gather.  This three word “mission statement” aptly describes the three things which transpire when friends get together for a meal and libations at this Rio Rancho institution.   As with Cheers, the fictional neighborhood tavern of television fame, O’Hare’s is the type of place which makes patrons feel welcome.  Servers are attentive,  friendly and fun to engage in banter during the NFL season when they’re attired in the regalia of their favorite teams.

6 August 2020: I don’t often begin a meal with dessert, but you might well be advised to do so here because you don’t want to fill up before sampling one of their decadent sweet concoctions. In general the cheesecakes are outstanding with just one of the many standouts being the phenomenal Irish cheesecake made with Bailey’s Irish Cream. This is one of the few desserts not made in-house. The Irish Cream provides an interesting taste contrast to the sweet chocolate Graham cracker crust and luscious cream cheese.

6 August 2020: There’s no food that defines the United Kingdom more than fish and chips.  O’Hare’s serves a tasty version, albeit not wrapped in newspaper. Deep fried and lightly battered, the fish is flaky, moist and fork tender.  Having lived in England for more than three years, I have yet to find fish and chips to approximate the flavor and texture my Kim and I experienced in the  fish and chips shops throughout  the Old Country.  O’Hare’s rendition is Americanized as are most of the fish and chips served throughout the fruited plain.  That doesn’t make it bad–and in fact, if you haven’t traveled throughout England, you won’t know better.

Among the sandwich offerings, the patty melt and the “build your own” burger are oh so much better than you’ll get at any local chains. The “build your own…” includes literally hundreds of possibilities with your choice of as many toppings as you want. Those toppings include bacon, guacamole, grilled onions, Serranos, green chile, sautéed mushrooms, avocado and roasted red peppers.  Grille entrees include your choice of waffle fries, mashed potatoes, onion rings, coleslaw, a cup o’ soup or a side salad.

6 August 2020: One of the most popular of the aforementioned appetizers is a six pack of mini-hamburgers called the “Slick Six Sliders.”    These sliders are an upscale version of the “sliders” made famous at White Castle, but are far less greasy and at least as tasty as the White Castle version. The patties are hand-formed and thick just beckoning for green chile and Cheddar cheese, making for a green chile cheeseburger in miniature with flavors as big as its larger brethren.

O’Hare’s Double Decker Reuben is a skyscraper-sized sandwich featuring grilled corned beef, melted Swiss cheese, sauerkraut and chile remoulade on grilled light rye.  Three aspects of this sandwich stand out.  The first is the high-quality corned beef which is grilled to perfection and is redolent with the savory-sweetness exemplifying the best of its ilk.  The second is the light rye, a buttery bread toasted lightly to allow its complementary properties to shine.  The third is the chile remoulade which has tangy, savory, sweet and piquant qualities.  It’s some of the very best remoulade we’ve had outside the French Quarter in New Orleans.

O’Hare’s “pub favorites” include a number of pasta dishes, some simple and some quite inventive.  Among the latter is a Serrano cream pasta dish constructed with the beautiful bow tie pasta that is Farfalle, mushrooms, red bells and garlic tossed in a Serrano chile cream sauce with freshly grated Parmesan.  For a pittance you can add your choice of chicken breast, sliced steak strips or tiger shrimp.  The Serrano cream sauce is mildly piquant and delicious, albeit a bit runny.  The Farfalle pasta is a delight to eat, each bow tie shaped pasta shell perfectly cooked.  The vegetables–mushrooms, zucchini, red bells and garlic–are fine, but would  make this dish superb if they were roasted.

6 August 2020: No chain can hope to duplicate the Dublin Pot Roast with roasted potatoes and vegetables, an entree of its kind as good as I’ve had anywhere outside the United Kingdom. Made well, pot roast is a comfort food as snug and cozy as your favorite pair of fuzzy slippers. At O’Hare’s, it’s made very well and exemplifies just why this restaurant is packed on Thursdays when Dublin pot roast is featured fare. The pot roast is tender (no knife needed) and juicy, slow-roasted to perfection.  The roasted potatoes are excellent, too.  Alas, the accompanying zucchini, carrots and onions are rather boring and more than a bit on the salty side.

Also made exceptionally well when offered as a special of the night is a pork loin entree which O’Hare’s dresses up with green chile and apple chutney. The piquant bite of the green chile and the sweet/tart taste of apple exemplifies the O’Hare’s willingness to stretch itself and experiment with seemingly contrasting tastes to concoct surprisingly wonderful taste sensations.

For some who frequent taverns in which adult libations are served, comfort comes in sixteen-ounce glasses.  For foodies, comfort arrives on a plate.  One of the most popular of several comfort foods on the menu is the chicken fried chicken and real mashed potatoes smothered in a green chile gravy.  The chicken fried chicken is rather petite compared to what you might find across Texas (where everything is bigger), but it’ll fill up most adults.  It’s a good, lightly breaded, white meat chicken, made even better by the green chile gravy.  The chicken moist, tender and delicious.

You might think O’Hare’s has a Southern heart because the chef really knows what he’s doing with gravies.  Even better than the aforementioned green chile gravy is a whiskey peppercorn gravy which is served with a slow-cooked pork entree with loaded mashed potatoes and green beans.  The pork is so tender and moist, you can cut tender tendrils of it with a spoon.   The loaded mashed potatoes arrive with all (save for sour cream) the traditional toppings of a loaded baked potato: chives, cheese and bacon.  Enjoy the mashed potatoes by themselves and slurp up the gravy by itself.  It’s that good.

In its annual Food & Wine issue for 2017, Albuquerque The Magazine awarded Basil Leaf a Hot Plate Award signifying the selection of its staff as one of the “best wait staffs…that’s lighting a fire under the city’s culinary scene.”  Considering the thousands of potential selections, to be singled out is quite an honor.

Dining at O’Hare’s doesn’t guarantee the luck of the Irish, but it does go a long way toward satisfying your hunger with genuinely good food. It’s pub food a cut above the stereotypical pub food.