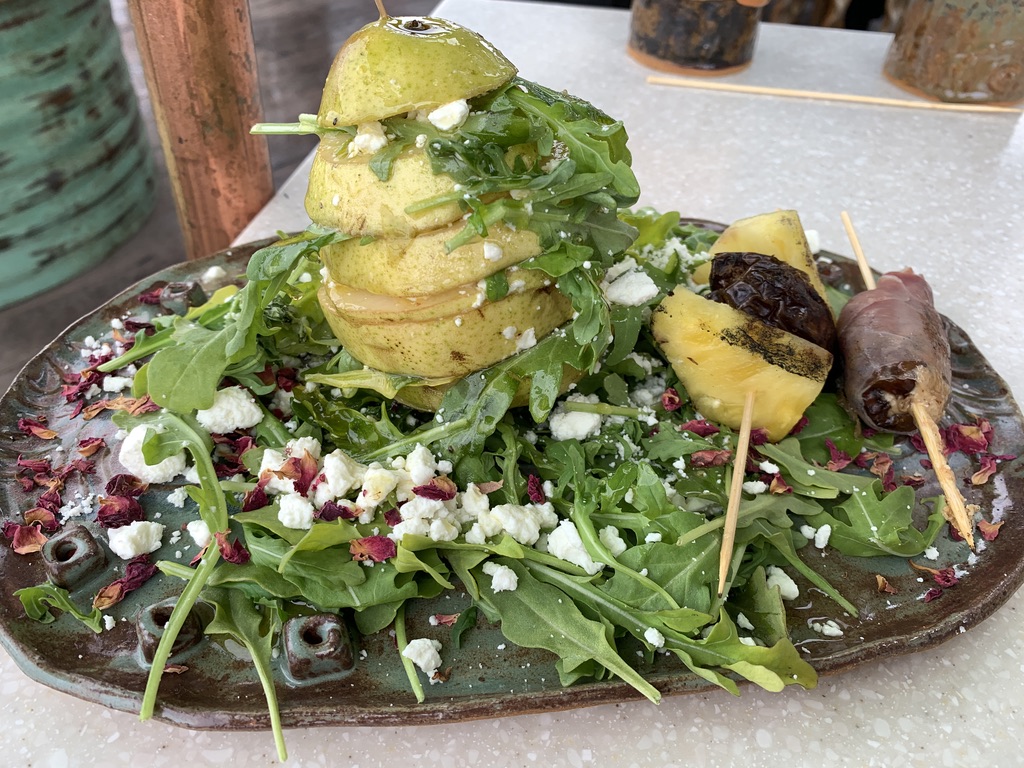 In a 1995 episode of Seinfeld fittingly titled “The Switch” Jerry asked his devious friend George Costanza how he could switch from dating Sandy, a dour woman who didn’t laugh to dating her roommate Laura, a comely woman who laughed at all of Jerry’s jokes. George’s contrived a plan: Jerry would suggest a ménage à trois.  This would disgust Sandy so much she’d break up with Jerry.  Sandy would then tell Laura who will feel flattered, thus paving the way for Jerry to ask her out. However, when both Sandy and Laura agreed enthusiastically to the ménage à trois, Jerry promptly backed out of the suggestion.

Like Jerry, I once faced a conundrum, but it wasn’t whether or not to become an orgy guy.  My dilemma was whether or not to continue being a “cold cuts guy,” steadily marching toward an early grave on the wings of pre-sliced, packaged meats replete in nitrates, nitrites and fat (not to mention enough sodium to fill the Great Salt Lake) all stacked Dagwood style on Wonder bread with a slice or four of processed cheese and a slather of mustard applied with a trowel.   The alternative was to go cold turkey and become a “charcuterie guy.”  Sure it would mean I’d have to act differently.  I’d have to get a charcuterie board and better spreaders for jams, preserves and mustards.  I’d have to buy knives for each cheese and spread.  I’d have to get new friends…charcuterie friends.

Thanks to my dear friend Becky Mercuri, I’m ready for it!   For my latest 39th birthday, Becky sent me a handcrafted charcuterie board from Dirty Bird Trading Co in upstate New York.  Dirty Bird is the brainchild of wunderkind chef Rob Mayerat who’s proven himself as adept and creative in woodwork and leathercraft as he is in the kitchen.  All my new charcuterie board needs now is a melange of meats, cheeses, spreads, breads and accents.  In the past I’ve put together charcuterie plates showcasing an assortment of flavors, textures and colors, but not on a canvas as artistic and beautiful as my Dirty Bird board.

Not only is my Dirty Bird board elegant and striking, it’s versatile.  In addition to charcuterie, it can be used for salumi.  Okay, charcuterie (French) and salumi (Italian) are essentially synonymous.  Both are terms for cured meats though over time both have come to include an assortment of meats that are paired with different accompaniments, such as toast, fruit, cheese, and sauces.  So, being a charcuterie guy also makes me a salumi guy.  I feel like a new man already.

When my friend Ryan “Break the Chain” Scott (also a charcuterie-salumi guy) and I made our inaugural trek to Tin Can Alley for lunch at Pho Kup, we took the opportunity to scout future dining opportunities.  Several intriguing options presented themselves, none more enticing to me that the quaintly named Cocoa Flora.  Self-described as “a tasting room so to speak,” Cocoa Flora purports to offer “unique…small plate offerings from a menu using products from various artisans.”  Its seasonal sample menu lists a cheese and salumi platter as well as an artisinal cheese board.  Surely it would give me ideas and inspiration for my own charcuterie or salumi platter.

Located in the second floor of the Tin Can Alley, Cocoa Flora boasts of artisinal food creations available to be served in an artful manner on a west-facing patio offering spectacular sunset views.  Cocoa Flora isn’t just another eatery.  It’s festooned with shelves displaying foods sourced from more than fifty artisans from across the fruited plain.  Their products can’t be found on Amazon or in New Mexico’s grocery stores.  Guests are invited to ask for a taste of the products in which they are interested or to request a customized picnic.  As a newly minted charcuterie guy, that’s precisely what I did…sort of.

In the stoner vernacular, the term “shrub”  has connotations of Colorado’s favorite cash crop, but you won’t find that type of shrub at Cocoa Flora.  Instead you’ll find a remarkably refreshing beverages such as my Kim’s lavender lemon shrub and my perfectly peared shrub.  Behind the Bar describes shrubs as “an acidulated concoction of fruit, berries, aromatics, sugar, and vinegar. The word shrub is derived from the Arabic word sharab, which means “to drink.”   If all that sounds too scientific, all you need to know is that shrubs are delightful.  Though they’ve actually been made since colonial America, only in recent years have they made a resurgence.  For that we’re very happy.

As you begin to peruse Cocoa Flora’s seasonal menu, your initial impression might be that there aren’t many options from which to choose (only one salad, for example).  Then as you scrutinize each item more deeply, you’ll discover there’s much more than meets the eye.  A lot more, in most cases.  Take the “Date With Cocoa Flora Salad” (stacked pear salad, slightly warmed, layered with arugula, mint and goat cheese crumbles, drizzled with rosewater honey dressing and served with your choice of stuffed grilled dates), for example.  It’s a concordant coalescence of elements presented like an edible work of art.  The effect–both when you first espy it and when you taste it–is memorable.  Quite simply, it’s one of the very best salads we’ve ever had.

One of nature’s unsung triumphs, pears can be sweet and juicy, but are best enjoyed when fully mature but not ripe–that exacting moment in every pear’s life when the stem end is beginning to yield to pressure.  Somehow Cocoa Flora pulls it off magnificently.  Every pear should taste as good.  Every pear should also be surrounded by such complimentary accompaniment.  One of our two stuffed grilled dates was bursting at its seams with grilled hazelnut butter and wrapped in waifishly thin prosciutto.  Pineapple slices flanked the other date which was stuffed with a different nutbutter (maybe cashew).  Perhaps the biggest surprise was the subtle deliciousness of the rosewater honey dressing.  Just enough of it was drizzled on the salad to allow other strong flavors–especially the goat cheese, arugula and mint–to shine.

The Cheese and Salumi Platter showcases a flight of artisanal cheeses of the day as well as your choice of salumi served with crackers and artisanal bread with mustard and your choice of two jams.  You won’t need the sagacity of Solomon to select salumi and jams that will absolutely blow you away.  Based on our inaugural experience, they all will.  One of the rules for a well-rounded salumi board is cheeses that vary in texture and sharpness.  Our three cheeses were exemplars of that rule: a soft, creamy brie; a firm Gruyere and what we surmise to have been an aged Gouda.  For optimized discernment of cheese flavor, we started with the most mild and ended with the sharpest, using the board’s excellent olives as palate-cleansers.

Neither of us had previously ever had the two meats we selected–an Agrumi (which translates from Italian to “citrus”) flavored with cardamom, orange peel and chile (actually chili flakes) and a Mole salami inspired by the magical fusion of sweet, savory, and spicy flavors which emanate daily from the kitchens of Mexico, particularly of Oaxaca.  Considered a “new world creation,” the agrumi is unlike any salami we’ve ever had, a unique melding of ingredients and flavors that surprised us with every bite.  With its zesty, earthy herbal flavor profile and fragrant bouquet, cardamom pairs well with the chili flakes.  While the pairing of cocoa and chipotle has long-been a staple in Mexican households, it’s a rather unlikely pairing on salami, but a pairing that really works well.

The two jams we selected–“Flaming Raspberry” and “Strawberry Lavender” were equally captivating.  The flaming raspberry jam is bolstered by peppers which by New Mexico standards would probably be considered mild on any piquancy scale.  Still, the heat is a sneaky surprise that makes the sweet-tart raspberry flavor come to life.  By New Mexico standards, the pairing of strawberries and aromatic floral lavender is definitely not a surprise, but the deliciousness of this jam certainly is.  We slathered both jams on the artisanal bread with me adding some of the gourmet hot mustard, too.  Not quite as incendiary as Chinese hot mustard, it might still water your eyes.

For dessert, Cocoa Flora urges “make it a party.  It only takes one.”  There are only two dessert options on the menu, both tempting.  Seasoned citizens among us will relive our childhoods with an order of the “Somemore Smores Party” (artisanal Graham crackers topped with artisanal marshmallow of your choice and a pot of hot, drinkable chocolate).  Smores have been around until at least 1927 with little variance in the “recipe.”  Call these “adult smores.”  From the artisanal marshmallows (lemon-lavender for me, plain for my Kim) to the pot of chocolate, they’ll appeal to children of all ages…though most children like their chocolate to be more cloying.  It was perfect for me.

Cocoa Flora has set the bar high for charcuterie-salumi guys like me.  Putting together such spectacular items for my Dirty Bird board will be a delicious challenge, one made easier by procuring those items from Cocoa Flora’s retail shelves.  This should be great fun!