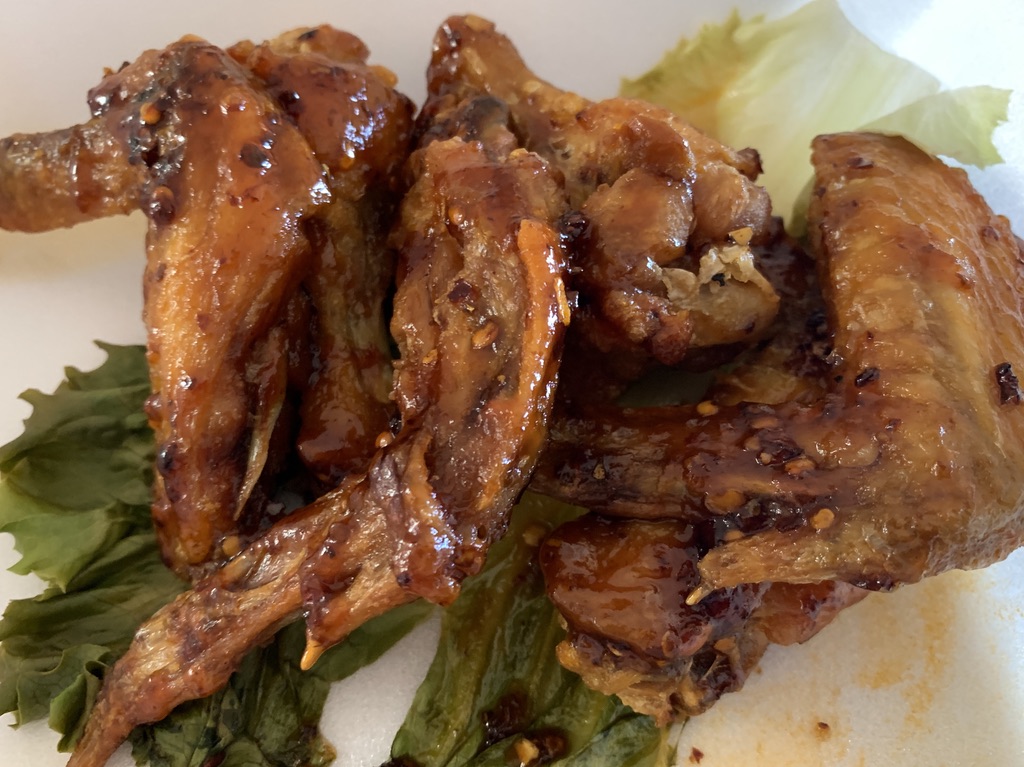 “Eat here and get gas.”  Even in more naive and innocent times, the connotation of that double-entendre wasn’t lost on adults or children, all of whom giggled when they espied the classic sign on the marquee of many a combination eatery and filling station.  In his brilliant website The Big Apple, the “restless genius of American etymology” Barry Popik points out the sign was noticed as early as 1930.  On roadways and byways–primarily across rural America–you might still espy that clever, funny and yes, inviting sign.  It undoubtedly still inspires guffaws and groans in equal measure.

Consumer historian Jan Whitaker explains in her magnificent blog Restaurant-ing Through History that not long “after thousands of Americans acquired cars and took to the roads in the 1920s that all kinds of roadside businesses popped up to serve them.”  Among the most popular was the combination gas station-restaurant “often further combined with a gift shop or rooms for overnight guests.”   She described the logic as “same one-stop-shopping idea used by department stores: get customers to stop in for essentials and they may buy other things they didn’t even know they wanted.”

Today, these “eat-and-get-gas highway oases” still exist across the fruited plain, albeit most often as interstate service plazas pulling double duty as truck stops.  Much more rare–even in rural communities–are the combination gas station-restaurant under one roof.  More often what you’ll find are the type of one-stop shopping convenience marts Jan Whitaker described, the type where you can buy things you didn’t even know you want.  In the Duke City, one edifice offers the convenience of emission testing for your vehicle and great Vietnamese food for you.

Even though Albuquerque’s quaintly named 2000 Millennium Restaurant doesn’t have a sign inviting diners to “eat here and get gas,” it’s attached to a garage that houses the Saigon Express Emissions Testing facility.   By virtue of its shared space, it’s undoubtedly engendered trite scatological references to emissions and Vietnamese food.  Because the T&T Gas N Mart on Alameda also offers Vietnamese food, it, too, might inspire reminders of bygone days when you could “eat here and get gas.”

Whether setting off on a long journey or driving around town, the T&T Gas N Mart offers that one-stop convenience Americans love.  Not only can you purchase canned goods, non-alcoholic beverages, snack foods (including Jay’s Potato Chips), baby essentials, bread, eggs, milk and lottery tickets (including Scratchers).  Best of all, the T&T (a term which itself might inspire gaseous references) offers freshly made Vietnamese cuisine.  T&T, by the way, refers to owners Tai T Nguyen and Tuan Q Nguyen.

With only 21 food items, T&T’s menu is far from the compendium-style menus you’ll find at restaurants such as Saigon Restaurant (145-items).  While the food menu is rather limited, the restaurant section of the complex offers nearly thirty smoothies, milk teas and ice teas and nearly as many add-ons (primarily “popping” boba).  Flavors include strawberry, banana, green apple, chocolate, kiwi, lychee, red bean and even durian.  My Kim swears by the green apple smoothie with cherry popping boba.

You might experience a bit of sticker shock as you peruse the menu.  The most expensive item is just ten dollars as of July, 2020, but the true cheap eats are among the appetizers.  Fried wontons are only fifty-cents each while egg rolls and fried shrimp are seventy-five-cents apiece.  Interestingly, French fries, the only non-Asian item on the menu, go for three dollars.  In addition to Vietnamese staples, you’ll also find such Chinese fare as chow mein and orange chicken.  The only Thai offering is the ubiquitous pad Thai.  The egg rolls might just have the thinnest, crispiest wrappers we’ve had, reminiscent of thin wafer cookies.

It’s oft been said that chicken wings are inflation proof.  Unlike gourmet burgers and tacos, chicken wings have remained inexpensive, ergo extremely popular. Wings are the least-expensive poultry pieces because there’s not a lot of meat on them compared with drumsticks, thighs or breasts. Their tiny size makes them the perfect finger food which makes them optimum for informal meals.   T&T offers six per order chicken wings for less than five dollars.  They’re lacquered in a sticky sweet and hot sauce, emphasis on “sweet.”  It would probably take a dozen or so per person to sate your appetite, but should enjoy them.

One of the most filling entrees on the menu is the lemongrass chili chicken served with steamed rice.  With its characteristic tangy lemony flavor, lemongrass is one of the most popular herbs used in Vietnamese cuisine.  T&T pairs the prized herb with incendiary chili, chopped onions, green peppers and chicken in a broth the color of tobacco juice.  Don’t give the color of the broth a second thought unless it’s to contemplate how good it tastes.  The broth soaks up the perfectly prepared steamed rice which you might need to stem some of the heat from the chili.

Few Vietnamese sandwiches (banh mi) we’ve found in Albuquerque are as generously stuffed as the banh mi at T&T…and not just with shredded carrot, daikon, jalapeños and cilantro.  T&T stuffs them with the meat of your choice: chicken, beef, pork, meatball or a combination thereof.  Crusty on the outside, soft on the inside, the baguette which serves as the canvas for other ingredients is about six-inches long and nearly half that thickness.  My Kim praised the pork, grilled and seasoned with anise and cinnamon.

At T&T Gas N Mart, not only can your vehicle fill up on the gas it need to keep going, you can fuel up with delicious Vietnamese food in a most surprising location.