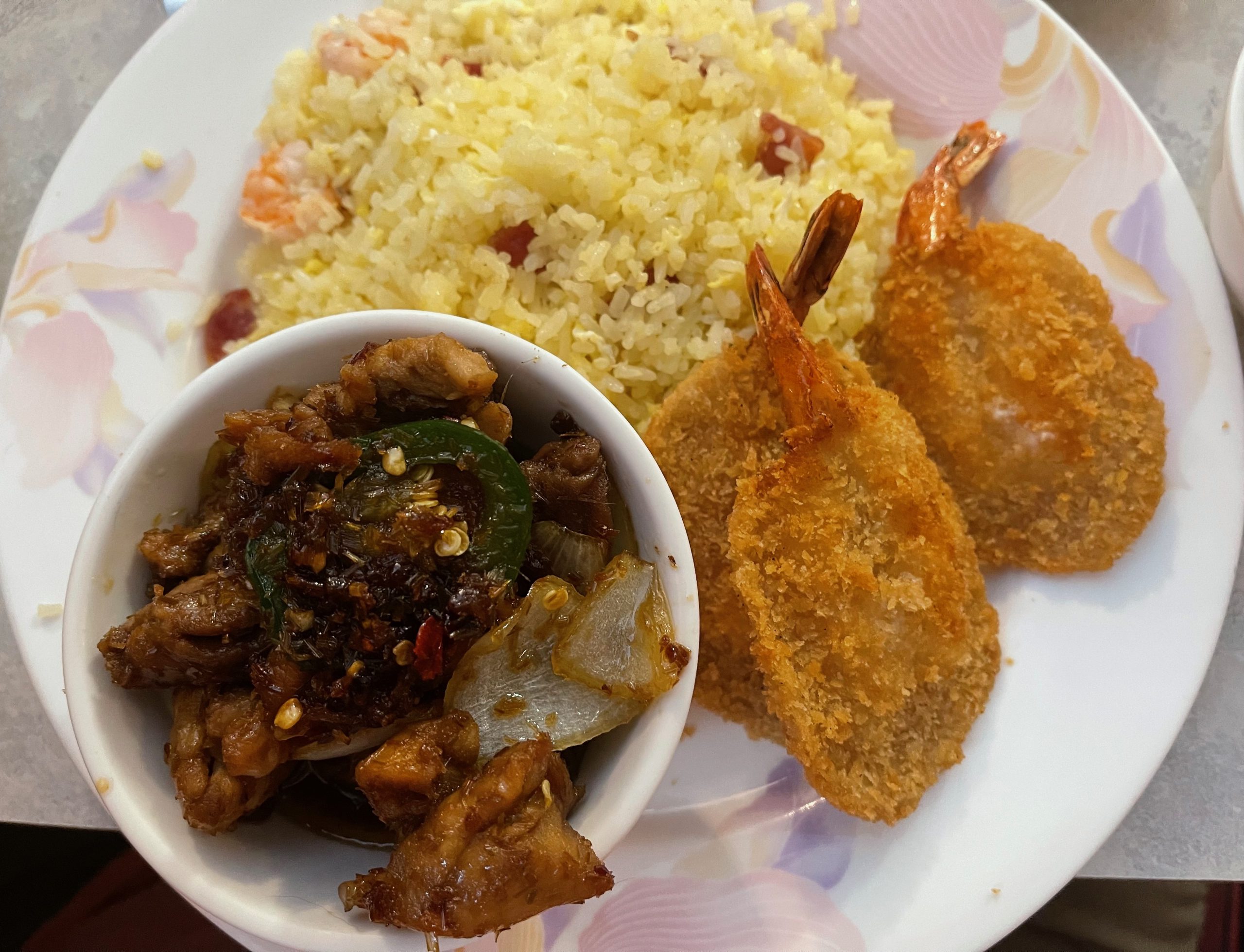 According to some stereotypes, when you eat Chinese food, you’ll be hungry an hour later.    That stereotype is known as the “Chinese food paradox.”   One of the culprits behind that stereotype is rice, a very starchy food which metabolizes quickly.  Others blame monosodium glutamate (MSG) when hunger creeps in shortly after finishing a meal. Italian food is also shrouded in stereotype. “The trouble with eating Italian food,” according to British writer George Miller, “is that five or six days later you’ll be hungry again.” With Italian food–at least Americanized Italian food served in some of the ubiquitous chains–portions are often enough to feed a village in a developing country.  A plethora of pasta, tons of tomato sauce, mountains of meatballs.  Is it any wonder Alka Seltzer’s most famous commercial depicted a poor sap bemoaning the consumption of dozens of Mamma Mia’s spicy meatballs?

If taste buds and olfactory senses have a memory, there’s nothing more memorable than Vietnamese food. Hours after each Vietnamese dining experience, taste buds beckon for a return…and soon. Fortunately Albuquerque is blessed with several outstanding Vietnamese restaurants.  That makes it a real challenge determining which one will quell our nearly wanton longing for divinely inspired cuisine–cuisine whose pedigree includes the creative influences of French, Chinese, Indian traditions, ingredients and techniques.

Saigon is somewhat of an anomaly in that it’s not located anywhere near Albuquerque’s tightly-knit Vietnamese neighborhoods, most of which seem to be concentrated on the southeast quadrant of the city. That didn’t stop chef and proprietor Vicky Truong from cultivating a loyal and diverse patron base who visit her restaurant to partake of a 145-item menu which features the distinct flavors and unique preparation of the most authentic Vietnamese cuisine in town. It also hasn’t stopped the Vietnamese community from frequenting Saigon perhaps moreso than any other Vietnamese restaurant in town.

Chef Truong learned her trade in San Jose before plying it in the Duke City where at one point she had operated her Saigon restaurant for eight years without a day off (although the restaurant is closed on Tuesdays). The affable chef flits between the kitchen and the dining room, addressing her guests as “honey” or “sweetie” and ensuring their comfort. For years, her “staff” consisted solely her sister, the genial and peripatetic Mai Tran.  Since then she’s cultivated a trusty kitchen staff who meet her high standards though she does all the cooking. She wouldn’t have it any other way.

Pop Muzak reverberates throughout the large, well-lit dining room where diners sink into oversized maroon vinyl booths and study a menu replete with tempting options. While some items are pretty standard fare, fix your eyes and take a chance on some of the entrees and appetizers not served anywhere else. Your adventurous spirit will be result in a unique and flavorful meal you’ll want to duplicate soon.

24 May 2019: Start your meal with an appetizer of fried mussels with tamarind. The sea-sealed brininess of the mussels contrasts beautifully with the sweet, sour and slightly acidic taste of the tamarind-based sauce in which the mussels swim together with grilled white onions under a canopy of cilantro leaves. It’s a delicious feast of complementary yet contrasting tastes.  As with most dishes at Saigon, it is plated and presented beautifully.  My preference would have been for New Zealand green lip mussels which are larger and meatier, but even smaller mussels are a magnificent mollusk with plenty of flavor.

24 May 2019: Saigon actually offers three different appetizers showcasing mussels.  Two, including mussels with sesame seed, are fried.  The other, steamed mussels in lemongrass is more akin to the mussels dishes in a broth you find in French restaurants.  With its minty-lemony notes, lemongrass won’t necessarily remind you of the influence of white wine when paired with mussels, but it too, lends palate-pleasing qualities.  Jalapeños, of course, lend piquancy.  Altogether, herbaceous qualities meld very well with the almost ethereal ocean flavor of mussels.

10 April 2022: Saigon is the only restaurant for which I’d list egg rolls as an absolute “must have.”  These cigar-shaped treasures, served with a tangy fish sauce, are among the very best I’ve had anywhere. They explode with the flavor of perfectly seasoned ground pork and vegetables encased in a crispy, deep-fried yellow wrapper. Served six to an order, it might be advisable to request two orders to keep peace in the family. As with other appetizers, the greenery (cilantro, mint and Thai basil) isn’t there solely as plate decoration. Vickye expects that her guests will wrap their egg rolls on a lettuce leaf and add cilantro and Thai basil to taste–and if you don’t, she’ll certainly talk you into it.

If you ever espy a diner at one of the Duke City’s Vietnamese restaurants wrapping something that’s already wrapped (egg rolls) in lettuce, chances they picked up that habit at Saigon under Vicky’s tutelage. It’s the way we now like them, but only at Saigon.  We’ve found no other egg rolls worthy.  My friend and colleague Tuan Bui who lived in Vietnam until age 12 had never had egg rolls wrapped “Vicky-style,” but he’s hooked.  The fresh greenery adds textural and freshness components to the egg rolls.

24 May 2019: On my eleventh day of suffering from a debilitating cold-flu-malaise, my friend Tuan suggested bun bo Hue might be just what the doctor ordered to clear my congestion.  Bun bo Hue, as faithful readers might recognize, is my very favorite of all Vietnamese soups.  Yes, even over pho, the national national dish of Vietnam, a comfort food favorite that has captured the affections of diners the world over.  When both Tuan and I ordered it, our server explained that while Tuan would probably enjoy it, it might be too “pungent” for me.  Tuan, who’s called me “the most Asian Caucasian he’s ever met,” laughed and assured her I could handle it.

While the Bun Bo Hue, a spicy beef noodle soup had a nice depth of flavor and discernible heat, it wasn’t as “authentic” as this Asian-Caucasian would have liked.  The traditional Bun Bo Hue recipe calls for beef shank and gelatinous pig blood. Yes, sanguine swine! Eating the multifaceted brew of pork broth, pork balls, vermicelli-like rice noodles and congealed pork blood is just part of the Bun Bo Hue fun.  Sadly, most Vietnamese restaurants in the Duke City take that fun away.  Still, Saigon’s Bun Bo Hue is some of the best in the city, but it didn’t take my congestion away.

10 April 2022: Many rice entrees begin with “dry rice stick noodles” which despite an unappetizing name, really means long-grain rice vermicelli noodles prepared with no sauce. There’s nothing dry about them despite the name–and after these noodles absorb the flavors of all with which they’re prepared, you’ll have a fun feast slurping up these waifishly thin noodles. In the photo above, dry rice stick noodles are practically covered with halved egg rolls and grilled onion beef. Julienned carrots and white onions along with crushed peanuts add to the menagerie of flavors which you can then douse liberally with fish sauce if you’d like.

30 May 2009: Another artful appetizer unique to Saigon is the shrimp cup with fish sauce and salad. Shrimp cups are similar to puff pastries, but have a unique flavor resultant from the marriage of tiny shrimp, shrimp powder and a moist pastry wrapper.  The pastry wrapper seems very definitely influenced by French culinary practices which is no surprise considering France occupied Vietnam for decades.  Still another French influenced appetizer is the roasted quail–two perfectly roasted and impeccably seasoned quail.  This is the epitome of finger-licking good. That’s due, in part, to the delicately small quail itself, which by virtue of its size has to be held by both hands even as you nibble tiny bites of the sinewy flesh.  A slice of lime is squeezed onto small plate of spices (salt, pepper, garlic and more) to provide a unique dipping sauce which impacts a wonderful flavor to the quail.

Unlike some American restaurants, it’s not only the meat entrees that warrant their own special sections on the menu. Saigon’s menu pays tribute to rice and noodles, two Southeast Asia staples. Rice plates and noodle plates can be ordered with various meats, fish shrimp or egg rolls (one appetizer order just isn’t enough), all of which are wonderful. One of our favorite combinations includes shredded pork and pork chops, both incomparably grilled and seasoned with anise and other spices.

30 August 2009: Every time we think Vicky has outdone herself with an entree that surprises us, we uncover another dish we swear might be better than anything else on the menu.  That makes it difficult to pinpoint one favorite.  Instead, you’re bound to find one new favorite every visit.  During an August, 2009 visit, we discovered the special clay pot rice with grilled chicken (#70 on the menu).  Clay pot cooking is popular throughout Asia where the clay pot is used as both pot and serving dish.  As you eat, the clay pot remains piping hot throughout your meal which allows the slightly smoky sauce of chicken simmered and slightly caramelized on the pot to waft invitingly for the duration of your meal.

Grilled chicken is but one of the centerpieces of this entree which also includes mushrooms, ginger and Chinese sausage (an unbelievably delicious sausage).  The flavors coalesce with the fine-grain rice to form a delicious composite, a soul-warming Vietnamese comfort food that might make you long for a cold winter day.

10 April 2022: Saigon’s menu is replete with dishes that offer a variety of taste and texture profiles centered around a single main ingredient.  One such example is the Combination Special Rice Plate 2 which includes aromatic lemongrass chicken, fried rice, fried prawn and steamed vegetable.  This combination plate’s fried rice is made with Chinese sausage (my favorite) and tiny shrimp, a perfect foil for the assertive lemongrass chicken.  The minty-citrusy lemongrass chicken is made even more flavorful with jalapeños, onions and chili.  It’s not especially potent (at least if you’re New Mexican), but it’s got lots of flavor.  Three fried prawns, butterfly shrimp battered in tempura are served with a sweet and sour sauce you’ll likely discard in favor of the restaurant’s fish sauce.

Sai Gon may have been the first restaurant in town to offer durian shakes (no longer on the menu as of April 2022) and I may be the only non-Asian in town who orders them. Considered the world’s stinkiest fruit, durian exudes a light aroma reminiscent of tropical fruit and garlic, but my stand-up comic friend Bill Resnik insists it is closer to the malodorous emanation of “feet and perspiration.”  If you’re not into adventurous beverages (at least those without alcohol), a lesser risky beverage you might enjoy is a Jackfruit shake (although when ripe and unopen, it may have a malodorous fragrance, too) with tapioca (boba). Jackfruit tastes a bit like pineapple only not quite as sweet or juicy. Another option is an avocado shake which might remind you a bit of sweet guacamole which you drink. The menu also ofers a Guyabano shake which sounds almost too good to be true.  Guyabano is a heart-shaped fruit with a dark green, leathery and spike-like skin.  Its flesh is creamy and delicious as well as being high in carbohydrates and vitamins while being low in cholesterol, saturated fat and sodium.