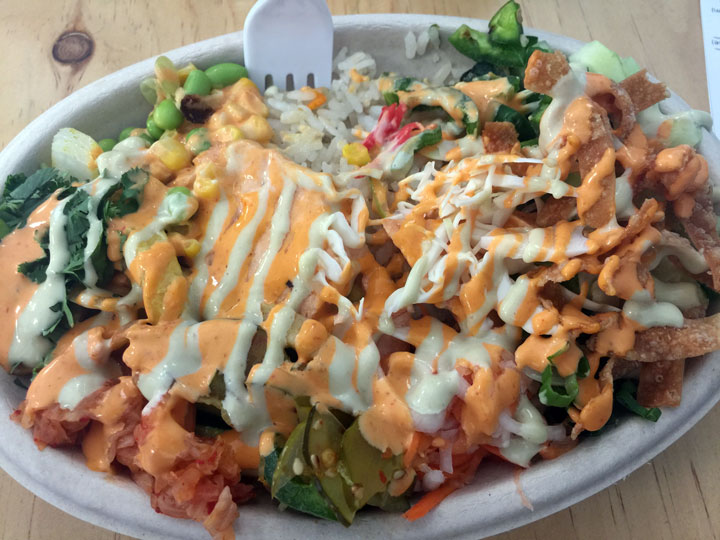 In the 1970s, comedian Norm Crosby based his schtick on the use of malapropisms (the mistaken use of a word in place of a similar-sounding one, often with unintentionally amusing effect). The “master of the malaprop” would mispronounce keywords in familiar idioms and clichés, in the process giving new meaning to what he was trying to convey. Here are some examples: As a famous stand-up comic, he appreciated standing “ovulations” when he performed. When his dad explained the facts of life to him, his dad drew a big “diaphragm.” When he went to a tailor, it’s because his pants needed an “altercation.” When people couldn’t read or write, Crosby attributed the problem to “illegitimacy.”

In real life, however, most people don’t realize their own fox paws. My Kim, for example, would give Norm Crosby a run for his money though her malapropisms are wholly innocent and not designed to elicit a laugh. On a sweltering summer day in Arlington Heights, Illinois, for example, she once ordered “soba” tea from the Mitsuwa Marketplace. Initially the young lady at the counter was confused, but once she figured out that Kim actually wanted “boba” tea, she couldn’t help but giggle. Recently at a Whole Foods Market, she asked an employee where she could find “Maricopa” almonds when what she really wanted was marcona almonds. Then there was the time she ordered a “Chimi-chingona” from a Mexican restaurant when she wanted a chimichanga. “Chingona,” if you’re not versed in Spanish slang is a term meaning “badass.” Where she learned that word is beyond me.

Lest you think my Kim is a bit scatter-brained, when I told her of my visit to Mogu Mogu, she immediately reminded me that Mogu Mogu must be a Japanese onomatopoeia (the formation of a word—such as cuckoo or boom–from a sound associated with what it is named). Mogu Mogu, it turns out is an onomatopoeia in English, too, translating from Japanese to “munch munch.” Moreover, it is one of the most exciting new dining concepts to launch in the Duke City in recent months. My friend Larry McGoldrick, the professor with the perspicacious palate, explains that “Mogu Mogu serves some of the freshest and tastiest food in ABQ with a Japanese flair.”

Alas, you won’t find Mogu Mogu in some bustling, centrally-located shopping center. Situated in the Journal Center area on Masthead just west of Jefferson, it’s pretty much off-the-well-beaten-and-eaten path for most of us who don’t work in the immediate area. Further, it’s operating hours—Monday through Friday from 11AM to 2:30PM—mean its hours also aren’t convenient for many of us. Perhaps cognizant of these limitations, Mogu Mogu is located in an 800-square-foot space on the ground level of the 10,000 square-foot office building that houses Kinesio, the therapeutic tape company whose product graces the sore limbs and torsos of many an Olympic, professional and amateur athlete.

Owner Tomoko Kase actually served as a vice president at the Kinesio company before being called away by the lure of owning and operating her own restaurant. Her business acumen served her well in that she understood how underserved the burgeoning Journal Center is by fast-casual restaurants. Mogu Mogu is essentially a “create your own” concept designed to give guests simple, fresh and fast meals. It’s a concept similar to that of Poki Poki and Hello Poke, two restaurants specializing in Hawaiian poke bowls. It’s an experience coupling personalization and experimentation with Japanese ingredients and culinary techniques. As so eloquently stated on the Web site, Mogu Mogu offers “the convenience and value of fast food, all without the greasy regret and stained shirts at the office.”

Guests have the opportunity to create their own bowl, sushi burrito or sandwich from an assortment of proteins, veggies, toppings and sauces. Your first of several tough decisions is to choose a base for your meal from among several rice, noodle or lettuce options. The “middle” section of your meal comes next with your choice of one protein and two veggies. Then you can go wild on the toppings (including some premium toppings for an additional pittance) and sauces. Larry, the percipient professor (who can recite Pi to about 8,000 digits) quickly figured out you can make a minimum of 15,840 possible combinations using one choice from each of the four steps: base, middle (proteins and veggies), toppings and sauces. As he astutely pointed out “ if you create a boring bowl, you have only yourself to blame.”

23 March 2017: While my bowl was hardly boring, I have only myself to blame for not having built a bowl as exciting as the one my friend Bill Resnik constructed. Picking a base of rice bowl with curry really limited my options. Essentially, half of the bowl was dedicated to Japanese curry (which I dearly love) and the other half to brown rice. It didn’t make sense to top the curry though the mad scientist in me would otherwise have piled on as many ingredients as the bowl would hold. I did top the rice with overnight ginger pork (a nice complement to the curry) and every topping on the menu (green onion, cilantro, cabbage, edamame mix, pickle with bonito, kimchi, jalapeno, crispy noodles and pickled veggies), but my sauce was essentially the curry. As far as Japanese curry goes, Mogu Mogu’s version is terrific, as good as you’ll find anywhere in the Duke City. The curry and the rice should have been my focus, not the hodgepodge I created (and no, it wasn’t bad at all). It just wasn’t as good as Bill’s (seething jealousy here).

23 March 2017: Bill’s bowl started with an fried rice for which he selected roasted salmon as his protein and both veggie tempura and curry roasted veggies as his veggie choices. His topping selections were virtually everything but Mogu Mogu’s kitchen sink and his sauce choices were Wasabi mayo and Asian dressing. Throughout our meal I eyed Bill’s bowl with both envy and lust and probably a few other cardinal sins. Bill has become a master of the “create it yourself” poke bowl and now the Mogu Mogu bowl. I hate him!

17 April 2017: Dining at Mogu Mogu is akin to having a delicious new adventure every time you visit. It’s the type of adventure that offers many forks in the road, each potentially more delicious than the other. The forks of which I speak, of course, are the 15,840 possible combinations using one choice from each of the four steps: base, middle (proteins and veggies), toppings and sauces. It’s not inconceivable to fill out the paper menu then change your mind several times as you pass the prep station where gleaming silver trays with sundry ingredients are on display. During my second visit, fried rice was the base I originally selected but one gander at the Asian salad and a change of mind was inevitable. The Asian salad is a beauteous bounty of mixed greens and such surprises as blackberries. It was too good to pass up. Neither was the roasted salmon or the standard and premium toppings (yes, every single one of them) with soy wasabi and mango Habanero. The veggie tempura (green chile and eggplant) are exceptional. So was the entire creative concoction.

23 March 2017: In addition to the bowl, sushi burrito or sandwich of your own making, Mogu Mogu offers two sides—potstickers (five per order) and spring rolls (two per order). The spring rolls may be the one item on the menu that belies Mogu Mogu’s “without the greasy regret” or at least that was our experience. Don’t get me wrong. They weren’t sopping with oil, but there was enough of it to warrant a napkin or two. The spring rolls, about six-inches long and rather thick, are engorged mostly with cabbage and served with a rather cloying sauce. They would have been much tastier with say a wasabi mayo.

There are some ten-thousand workers in the Journal Center area. On the day of our inaugural visit it seemed about a third of those workers were queued up to have Mogu Mogu build a delicious meal for them based on their preferences. It’s an option which should be available to more Duke City diners.