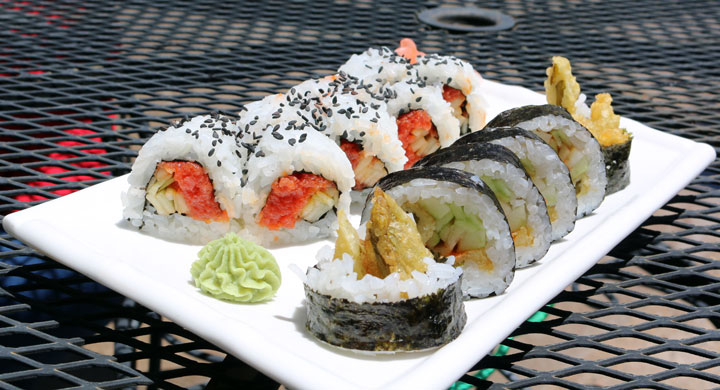 Carpe Diem Sum–“seize the dim sum” at AmerAsia, the Alibi’s perennial selection for best dim sum in the city honors (diem sum, as spelled on AmerAsia’s menu is also a correct spelling). Dim sum, a Cantonese word that can be translated to “a little bit of heart,” “point of heart” and “touch the heart” has its genesis in the Chinese tea houses of the Silk Road. Weary sojourners would stop at tea houses for tea and a light snack (ergo, touch the heart). Over time, the popularity of the tasty little treasures offered at these tea houses led to larger restaurants serving dim sum meals until mid-afternoon, after which other Cantonese cuisine was made available. Today, dim sum buffets are a popular offering throughout the United States. Albuquerque’s most venerable practitioner of the traditional culinary art of dim sum is AmerAsia which has been serving Albuquerque since 1978.

Though AmerAsia has been around for nearly thirty years, out of blind loyalty to Ming Dynasty we avoided trying it, reasoning there is no way anyone could serve dim sum quite as good as the popular Cantonese restaurant. Thankfully AmerAsia’s diem sum captured the unfettered affections of a Chowhound poster from Phoenix who calls herself “Tattud Girl.” For years, the Tattud Girl has been telling one and all about AmerAsia’s delicious treasures. In April, 2006, her posting included photographs of those delights. While one picture may be worth a thousand words, her photographs appealed to all ten thousand of my taste buds and prompted our first of soon to be many visits. The diem sum photos on this review are, in fact, courtesy of the lovely and talented Tattud Girl (who, as it turns out is quite the world traveler, also going by the sobriquet “Wanderer 2005.”

At the very least, AmerAsia proved that Albuquerque has room for two popular dim sum restaurants. At the very most, some say it’s every bit as good as Ming Dynasty when it comes to delicious diem sum…although Ming Dynasty serves more than twice as many dim sum items, including a huge array of seafood). For that all Duke City diners should be thrilled. AmerAsia serves diem sum for lunch Monday through Saturday from 11AM to 2PM and for dinner on Friday and Saturday evenings from 5:30 to 8:30PM. It is the perfect dining destination when one entree just won’t do and you want a multi-course meal that tantalizes your taste buds with varied sensations (including sweet, piquant, savory and sour).

The heart and soul of AmerAsia is Korean born proprietor Hyangmi Yi who enthusiastically greets all patrons and flits around the restaurant’s dining rooms pushing her tiny treasure filled cart. Hyangmi actually worked at AmerAsia for 24 years (she hardly looks any older than 24 years old herself) before buying the restaurant. She is part waitress, part greeter and full-time ambassador for the tiny restaurant and the craft she obviously loves. You can see the diners’ eyes light up as she approaches. Many appear to be seasoned veterans of diem sum dining and know exactly what they want. Most of the items are small (or at least served in small plates), giving the impression that you can try everything on the 22-item menu and still have room left over. We tried that and were able to sample fewer than half of the heart pleasing treats. Budget conscious diners beware because your bill of fare is tallied by adding up the number of plates on your table.

While many of Ming Dynasty’s dim sum offerings are so authentic (such as chicken feet and shark fin soup) that many Americans shy away, AmerAsia’s diem sum is more innocuous, totally non-threatening to unacculturated diners. By no means does that imply AmerAsia’s diem sum is Americanized. You definitely won’t find heavily breaded and candied sweet and sour meats doused liberally with offensive sauces. Instead, you’ll find perfectly seasoned palate pleasing treats you’ll absolutely love, such as:

Sichuan Salad, a refreshing salad comprised of thick noodles and julienne carrots and celery in a slightly sweet vinegar dressing. The noodles are served cold and like many Asian noodles, can be eight to twelve inches per strand. They’re thick and delicious. This is an excellent way to start your meal.

Beef Noodles, a very spicy beef served over soft noodles with a broth nearly as piquant as the chili sauce on each table.

Chicken and Peanuts, steamed dumplings with julienne chicken, water chestnuts and peanuts. These dumplings might be reminiscent of something you’d have at a Thai restaurant.

Curry Pastry, a flaky pastry stuffed with curry pork and onion. The pastry is as flaky as you might find on a chicken pot pie flaky while the curry is sweet and pungent.

Beef Jiao Tzu, a dumpling stuffed with beef and garlic then deep fried. The breath-wrecking garlic and beef combination leaves a definite impression on your taste buds. This was the only item we ordered two portions of (more a consequence of being full than of preference).

Bao Zi, a steamed, white raised dough stuffed with Chinese barbecue pork. We’ve had steamed buns at several Chinese and Vietnamese restaurants but we’ve never had any as pork filled and delicious as these.

Chinese Spare Ribs, spareribs in a relatively mild Sichuan hot sauce. We actually expected something akin to the lacquered in sweet syrup Chinese barbecue spare ribs served at inferior restaurants. Amerasia’s spare ribs definitely were not of that ilk.

Crispies, crispy wonton skins covered in powdered sugar and cinnamon, somewhat reminiscent of beignets. These are a perfect way to end a wonderful meal.

In 2007, a second Amerasia was launched in a converted antique filling station on Third Street just north of Lomas. For a while, Hyangami kept the original restaurant open, but eventually she closed the long-familiar Cornell restaurant which, though very charming, was quite space constrained and a bit “seasoned.”

Not only does the reborn 3,500 square-foot Amerasia have a well-appointed, stylish and expansive new home (150 guest capacity), Hyangami partnered with her brother Woo Youn in sharing the sprawling edifice’s space to house Sumo Sushi, a highly regarded 2007 entrant into the Duke City dining scene. Sumo Sushi is an attractive milieu, starting with a semi-circular sushi bar on which a large ceramic sumo wrestler squats pensively as if to oversee the operation. The sushi is, as reputed, some of the very best in town and the Japanese menu includes other traditional Japanese dishes such as tempura, teriyaki and udon noodles.

Seating for al fresco dining faces Slate Street and isn’t shaded so at the height of the day, it can get rather warm. Worse, there isn’t anything to shield you from New Mexico’s spring winds which buffet everything in their path. Our kind server did set up an umbrella for our sushi venture in May, 2017, but ferocious winds tipped the table over and the umbrella came crashing down on us. Fortunately the temperature was only in the mid-70s so our daring dachshund Dude (he abides) didn’t get too warm. Interestingly, dim sum isn’t offered to al fresco diners, but sushi is.

27 May 2017: The green chile roll has a pronounced roasted green chile flavor which some New Mexican restaurants fail to capture. It’s also got a pleasant piquancy, but it’s nothing New Mexicans shouldn’t be able to handle–even if you use up the entire dollop of “American” wasabi (a mixture of horseradish, mustard and food coloring). Endowed with even more bite is the spicy tuna roll, an incendiary composition made from raw tuna, mayo, and chili sauce. Neither the green chile roll or the spicy tuna roll benefit much from a dip in soy sauce and “American” wasabi. They’re excellent sans amelioration.

27 May 2017: Though there are hundreds of sushi restaurants across the fruited plain, there isn’t a great deal of standardization in how they construct sushi rolls. You’re likely to find same-named sushi rolls throughout your travels across the states. That doesn’t mean a “tarantula roll” in Seattle, for example, will be constructed of the same ingredients as one in Albuquerque. We’ve seen tarantula rolls elsewhere topped with shaved bonito designed to resemble a spider’s web. The tarantula roll at Sumo Sushi is far less scary. A single fried shrimp constitutes the “head” of this caterpillar-like tarantula. The topping for this roll is avocado drizzled with a sweet unagi-type sauce. Inside the roll you’ll find crab and cucumber. It’s all good.

27 May 2017: The crunchy roll is coated on the outside with panko (light, crispy Japanese bread crumbs) crumbs that give it a delightful crunch (hence the name) the inside is refulgent with cooked shrimp, cucumber and other complementary ingredients. It’s drizzled with a sweet unagi-like sauce that provides a nice contrast to the soy-wasabi dip.

27 May 2017: My favorite is the grilled unagi (freshwater eel), a nigiri style (a slice of raw fish over pressed vinegared rice) sushi, which is said to have stamina-giving properties. Containing 100 times more vitamin A than other fish, unagi is believed to heighten men’s sexual drive. Japanese wives would prepare unagi for dinner to suggest to their husbands that they want an intimate night. After waddling out Sumo Sushi door after a boatload of sushi, intimacy is the last thing on our minds.

27 May 2017: When we asked our server, an affable Mexican gentleman who prepares all of Sumo Sushi’s sauces, which sushi roll was his favorite, he didn’t hesitate to sing the praises of the Big Night Roll, a beauteous, multi-colored roll with two sauces–a chile oil and the delightful eel sauce we enjoy so much on the unagi. The Big Night Roll is engorged with crab and cucumber and is topped with a gloriously red strip of salmon. It became our favorite.

AmerAsia has definitely captured the heart of many Duke City diners, giving every indication that even without a full Chinese menu, it is one of the four or five best Chinese restaurants in the city.