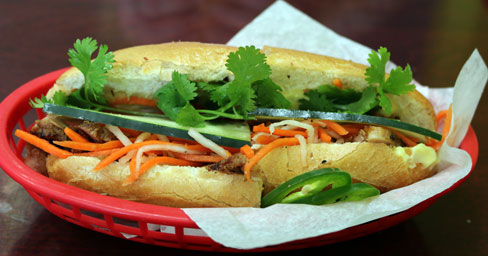 Please say it isn’t so! According to Nations Restaurant News, a highly respected trade publication “a new crop of restaurant chain entrepreneurs” believes “American diners will soon embrace the Vietnamese bánh mì sandwich as the next burrito or taco.” The notion of corporate chain megaliths setting their sights on the humble banh mi should send shudders down the spine of everyone who frequents the mom-and-pop nature of the banh mi restaurants we’ve come to know and love. Imagine a phalanx of Subway-like sandwich shops creating and selling banh mi. The notion isn’t as far-fetched as you might think.

One of the first chains vying to expand the presence of banh mi in the mainstream is Chipotle whose Asian-themed offshoot “ShopHouse Southeast Asian Kitchen” features banh mi as the menu’s cornerstone. If Chipotle does for the banh mi what it did for burritos and what Olive Garden did for Italian food, there will be generations of American diners who may never experience the real thing–an authentic banh mi prepared in the traditional manner by Vietnamese weaned on banh mi. Worse, slick Madison Avenue advertisers might convince them they prefer the faux food.

It’s a small consolation that it will probably take a while before the heavily bankrolled chain interlopers reach Albuquerque (think about how long it took before Chipotle invaded). That gives the Duke City’s three established independent purveyors of peerless banh mi the opportunity to win over even more converts. It should take only one visit!

Until just a few years ago, you had to visit larger cosmopolitan areas such as San Francisco to find banh mi. Eventually such banh mi pioneers as May Café, May Hong and Cafe Dalat, all full-service Vietnamese restaurants, began offering “Vietnamese Sandwiches” on their appetizer menus. Before long, almost every other Vietnamese restaurant in the Duke City followed suit. In 2010, Banh Mi Coda became the Duke City’s first full-fledged banh mi shop. It took three more years before Sai Gon Sandwich launched, becoming the second restaurant in Albuquerque dedicated solely to banh mi.

The third banh mi restaurant–the one about which you may not yet have heard–is called iKrave. The name means exactly what it sounds it should mean as in “I crave” banh mi. iKrave opened its doors in August, 2014. Being ensconced in a rather nondescript strip mall on Juan Tabo (just north of Constitution) and without a prominent eye-catching storefront, much of its business has come from the Vietnamese community and nearby residents. You wouldn’t blame them if they wanted to keep secret what is one of New Mexico’s best sandwich shops of any genre. Indeed, much of the restaurant’s traffic comes from word-of-mouth. That’s truly the best advertising you can get.

iKrave exemplifies the axioms “big things come in small packages” and “small place, huge flavors.” This Lilliputian lair has room for only a couple of small tables, a free-standing beverage refrigerator and a bamboo counter where you place your order. The man behind the counter is owner-chef Hien who not only constructs the banh mi (it’s a thing of beauty), he cures, marinades, cuts and otherwise imparts preternatural deliciousness on all the meats which grace the banh me he serves. He also slices, dices and juliennes all the fresh vegetables adorning each banh mi.

To say the banh mi is a sacrosanct sandwich is an understatement. So is calling it merely delicious or utterly wonderful. During a 2009 visit to Vietnam for his award-winning “No Reservations” show, Anthony Bourdain described banh mi as “a symphony in a sandwich.” It’s an apt description for the effect this superb sandwich has on your taste buds. You can almost picture all ten-thousand taste buds dancing, enrapt in the melodious harmony of flavors

Bourdain elaborated further: “The baguette alone is something of a miracle. How do they stay so crunchy, crisp and fresh on the outside, so airy, so perfect on the inside?” In truth, this statement is much more applicable to the baguettes in Vietnam than the bread used by banh mi purveyors throughout the Duke City. Hien procures his baguettes from a local baker whose classic preparation techniques are very close to those used in Vietnam. Unlike American sandwiches whose bread can lull taste buds to sleep, Vietnamese baguettes are really the vessel that coalesces all the flavors of the banh mi.

With your first bite, you’ll notice the difference and with each subsequent bite, your appreciation will grow for this delicious duality of light and airy, crisp and soft, fresh and flavorful bread. It’s the perfect canvass for any one of the eight sandwiches on the iKrave banh mi menu. Before he creates your sandwich, Hien brushes the baguette with a rather expensive French butter then heats it. It’s one of several touches he employs to ensure the most moist and meticulously crafted banh mi in town. It’s sandwich artistry at its finest and most delicious.

16 April 2015: Combination #1 is the mother lode, the bahn mi with the most. It’s an unheated sandwich (the Vietnamese version of a “cold cut” sandwich, but infinitely better) constructed with barbecue pork, pork roll and cured pork pate along with the classic banh mi condiments: Vietnamese mayo (cut with butter for moistness and nuttiness), fresh herbs (cilantro, scallions), pickled (julienne daikon and carrots) and unpickled vegetables (jalapeños). Note: For the fire-eaters among you, ask Hien to replace the jalapeños with Thai bird peppers which are far more incendiary and delicious. The sandwich is further moistened by sauce Hien uses on the barbecue pork. Every element in this sandwich is as fresh and delicious as it can be. Together they coalesce to create my very favorite banh mi in New Mexico.

23 July 2016: if your preference is for a heated sandwich, iKrave has several wonderful options. Savvy diners who frequent Vietnamese restaurants are familiar with grilled pork, porcine perfection marinated with the sweet spices of anise and cinnamon to create an olfactory treasure that dances on your taste buds. Imagine a banh mi created with this incomparably delicious pork. It’s better than your imagination. So is the grilled chicken banh mi. If you can’t make up your mind between grilled pork and grilled chicken, the ever-accommodating Hien will build a combination grilled pork and chicken banh mi for you. It’s my new favorite among the grilled banh mi.

24 May 2017: In modern vernacular, the term “size doesn’t matter” has implications of double entendre. In the culinary world, only the Food Network and Travel Channel would have you believe meatballs should be the size of basketballs. Vietnamese purveyors of meatball banh mi know better and the proof is in the eating. iKrave’s meatballs are about the size of the tiny meatballs once found on Chef Boyardee’s spaghetti and meatballs. Size truly doesn’t matter when the flavor of these tender pork meatballs will make you swoon. The meatballs are impregnated with seasonings that complement the fresh, crispy vegetable “slaw” made with pickled carrots and daikon radishes, sliced jalapeños, cucumber slices and fresh cilantro in a baguette canvas. This is one of the very best banh mi in the city.

16 April 2015: You’ll want to wash down your banh mi with sugar cane juice made on the premises by Hien himself. Take a gander at the beverage refrigerator where you’ll see bundles of sugar cane stalks from which Hien extracts the juice. Organic Lifestyle Magazine lists sugar cane juice (which has a relatively low glycemic index of 43), as a healthy alternative to table sugar when used in moderation. It contains fructose and glucose, which, unlike sucrose-based sugars, do not require insulin for metabolism. Moreover, it’s absolutely delicious! Alternatively, iKrave serves what Hien believes to be some of the strongest iced coffee in town. It’s excellent!

One of the most common, albeit more than a little bit Americanized, nicknames for Vietnam is “Nam,” obviously a diminutive of its full name. In honor of the banh mi, perhaps its nickname should be “num num.” iKrave is home to banh mi which will have you uttering “num num” and more.