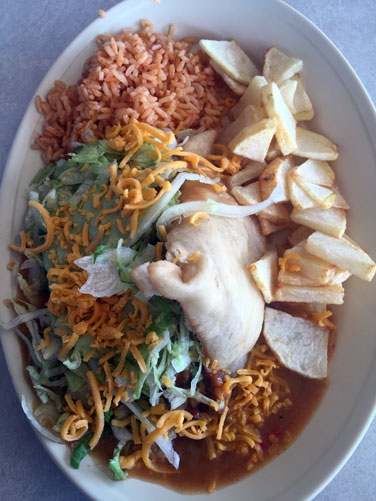 Before it was embroiled in the grip of violence born of warring drug cartels vying for control of the drug traffic destined for the United States…before its shameful history of violence against women was uncovered…before it was accorded the dubious honor of being named the world’s most dangerous city, Cuidad Juarez in the Mexican state of Chihuahua was long known as a rite of passage destination for hormonal adolescent males. It was heralded for its shopping districts where everything from kitschy trinkets to high-quality jewelry and leather goods could be purchased after engaging in the sport of spirited haggling with enthusiastic merchants.

Perhaps not as well known is that Juarez was, and perhaps still is, a great dining destination–and not just for authentic Mexican food (though several high-end and inexpensive Mexican restaurants were very highly regarded). A number of luxurious, steakhouses pampered guests with exceptional service and slabs of succulent beef. The very best Chinese restaurant (Shangri-La) in the El Paso-Cuidad Juarez metropolitan area warranted many a visit. As great as the culinary fare was, the familiar disclaimer “whatever you do, don’t drink the water” was always heeded.

For those of us who fondly remember Cuidad Juarez when it was a much more innocent (or at least less violent) city, some of those memories are rekindled with a visit to El Sabor de Juarez. From a culinary, if not ambiance, perspective El Sabor de Juarez is very reminiscent of the wonderful mom-and-pop restaurants on the other side of the border. At one time Albuquerque was graced with three El Sabor de Juarez restaurants –one on the West Mesa, one within the razed American Inn on Central Avenue and the elder sibling on Gibson Boulevard. Today only the Gibson location, open since 1980, remains.

From the onset, El Sabor de Juarez has been owned and operated by Jesus Mata and his family. That certainly accounts for its remarkable consistency over the years. It took effusive recommendations from Ian G. to remind me just how enjoyable the many breakfasts were that I shared with my Air Force friend and colleague Steve Cox at the American Inn location in the early 1980s. El Sabor de Juarez was our sanctuary from chow hall breakfasts of chipped beef and runny eggs.

The look and feel of the Gibson location is understandably dissimilar to that of the restaurant’s confines within the American Inn. For me, the most noticeable absence is the jukebox from which Al Hurricane, Tiny Morrie and Gloria Pohl songs could be played for two bits. On the rare occasion in which El Sabor de Juarez isn’t sardine packed, you’ll likely sit on a booth in the small front dining area. If you don’t have to visit the water closet, you might not even realize there’s a second and larger dining room on the side. Landscape paintings, none of which stereotype Mexican scenes, adorn the cinderblock walls of that dining room.

The rather sizable menu belies the restaurant’s relatively small digs. The breakfast menu, eerily similar to the one of my memories, lists some twenty items including six breakfast burritos, omelets, carne adovada, machaca and even steak and eggs. Best of all, a side of papitas can be had for a pittance. In my mind’s eye, there were no better papitas in Albuquerque. As we were to find out, they still are! The lunch menu is more substantial than the breakfast menu with burritos, tostadas, tacos, flautas, enchiladas, stuffed sopaipillas and menudo. The menu also lists several plates, all served with rice and beans along with a tortilla or sopaipilla. Steaks and mariscos (Mexican seafood) are also available.

Every meal at El Sabor De Juarez should begin with salsa and chips. The salsa is rather thin and will run off your chips so you either lean in toward your table or you wear a bib to protect your clothing. It’s a very food salsa albeit not especially piquant. The chips are low in salt and somewhat thin, but that shouldn’t matter because this salsa is made for dipping, not for scooping.

Three stuffed sopaipilla plates are available including one called simply “stuffed sopaipilla.” Stuffed means engorged with chicken or carne desebrada, lettuce, cheese, guacamole, pico de gallo and green chili (sic). The chicken is mostly white meat cut into small cubes. The guacamole is some of the very best in Albuquerque, so good it may prompt you to order guacamole on the side, too. Alas, the chile is rather insipid with absolutely no discernible bite. Its saving grace is that it has a very pleasant flavor. Both the rice (moist, but not tomatoey) and the refried beans are excellent.

For my Kim, carne adovada is the standard-bearer against which she measures just how good a Mexican or New Mexican restaurant is. To her consternation, some restaurants which don’t use cumin on anything else (for some inexplicable reason) add it to carne adovada, bringing about the ruination of a delicate dish which requires no amelioration. At El Sabor De Juarez, the carne adovada has no cumin (in fact, only the restaurant’s ground beef uses cumin). The marinated pork is as tender as snowflakes and absolutely delicious.

There are no desserts on the menu unless you consider sopaipillas a dessert…and most New Mexicans do. The sopaipillas aren’t the typical puffy “sofa pillows.” Instead they’re comparatively flat and don’t puff up very much, though there’s still enough puff to serve as a repository for honey. Alas, as most of the city’s Mexican and New Mexican restaurants do, El Sabor De Juarez uses “sopaipilla syrup” which isn’t a honey at all.

El Sabor De Juarez remains the delightful treasure it was when I frequented it thirty years ago. It certainly won’t be another thirty years before my next visit.