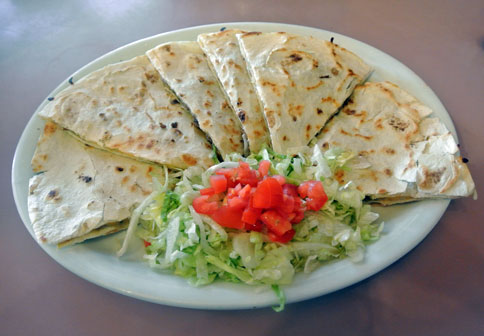 For years, one of the Land of Enchantment’s most renowned launching pads for political campaigns and careers has been Moriarty’s El Comedor De Anayas, a venue in which political power brokering has long been transacted over hot coffee and New Mexican food. Anyone and everyone who’s aspired to political office has held court at this venerable institution which translates from Spanish to “Dining Room of the Anayas.”

Launched in 1953 (one year before Moriarty was incorporated), El Comedor has long been the home away from home for two dynastic Torrance county political powerhouse families–the Anayas and the Kings, progenitors of two governors, a state treasurer, an attorney general, a land commissioner, state legislators, university regents and virtually every other local office of which you can conceive.

Framed and signed photographs of the many political glitterati to have stumped at the famous restaurant during their time on the rubber chicken circuit are on display at a wall of fame (shame or infamy, might be more apropos in some cases) just off the dining room. The smiling countenances of Governors Toney Anaya, Bruce King, Jerry Apodaca, David Cargo, Bill Richardson, Gary Johnson and others share space with broad-toothed photographs of Jimmy Carter and Bill Clinton who announced his inaugural run for the presidency within the restaurant’s hallowed walls.

Another wall is dedicated to luminaries of stage, screen and song such as Michael Martin Murphy, Charlie Pride, George Strait, Glen Campbell and Johnny Cash. Likely because of his shyness, there is no photograph of my friend and favorite Moriarty area celebrity Ryan “Break the Chain” Scott. Still another wall pays tribute to family members and local residents who have served in the service of their country as members of the armed forces. No visit to El Comedor would be complete without perusing these sacrosanct walls.

Founders Lauriano and Filandro Anaya were the first of four generations of Anaya family members to own and operate El Comedor de Anayas. In 2013, the fabled restaurant changed hands, but much of the veritable photographic museum of New Mexico politics remains. It’s what gives El Comedor its charm. Well, that and the wagon wheel chandeliers, shelves brimming with bric-a-brac and walls festooned with burnished copper kitchen ware.

For sheer character and history, however, you can’t beat the rotosphere that lights up above the restaurant’s exterior. Installed in the 1960s, it is very much reminiscent of the neon-spangled era of Route 66 and in fact, remains the only such rotosphere on Route 66. When first launched, locals called it “Sputnik” while others have likened it to an old U.S. Navy mine. In any case, it’s a vibrant, multi-hued star which beckons diners and visitors to El Comedor de Anayas. When running, the spiked globe rotates horizontally and each hemisphere rotates around a vertical axis in opposite directions.

As has been the case throughout its venerable tenure, the featured fare is New Mexican cuisine with a smattering of cowboy dishes (chicken fried steak), burgers and sandwiches, too. New Mexican items are prepared sans cumin, always a good sign for hard-line traditionalists like me. Pinto beans from local area farms are served with many items. Dishes are reasonably priced with only a few in the vicinity of ten dollars.

Appetizers include such New Mexico standards as chips and salsa, guacamole, quesadillas and con queso as well as spicy onion rings. The quesadillas are rather simply adorned, essentially a large tortilla folded over melted cheese and your choice of chicken or beef. Unless you request it, salsa isn’t standard accompaniment. Make sure you request it. Not only is the salsa lively and tasty, the quesadillas benefit greatly from it.

Beef, chicken or a combination thereof fajitas are a good choice for visitors whose heat tolerance is on the ketchup level (as was the case with my mother-in-law). Served in a sizzling skillet with grilled onions and green peppers, the beef has a terrific grilled flavor though a few gristle-laden beef strips detracted from our enjoyment. The fajitas are served with all the “fixings:” shredded cheese, flour tortillas, sour cream and guacamole. The guacamole is very good, much more than the personality lacking mashed avocados passed off as guacamole at some restaurants.

Though tepid by New Mexican standards, the curiously named Pack’s Green Chile Enchiladas might be a bit too incendiary for out-of-state visitors. This entree features three rolled enchiladas stuffed with shredded chicken, cheese and sour cream then topped with shredded cheese. We found the cheese-sour cream amalgam somewhat gloppy, reminiscent of the melted cheese used at ballparks on nachos. The highlight of this entree is easily the beans which are served in a hard corn shell shaped like a bowl. The nearby Estancia Valley grows the very best frijoles (pinto beans) in the country and they’re available at El Comedor.

You don’t always know what to expect when ordering carnitas at New Mexican and Mexican restaurants. We’ve had everything from fried ground beef to small ribs delivered to our table when ordering them. At Comedor de Anayas, carnitas are cubes of pork served with a tortilla, Spanish rice and beans. The carnitas are seasoned very well with flecks of pepper lending personality. The Spanish rice is one of those take-or-leave items most New Mexicans see only in restaurants.

El Comedor De Anayas is on the New Mexico Culinary Treasures Trail, a celebration of restaurants which have stood the test of time–independent spots that have become beloved in their neighborhoods and beyond.