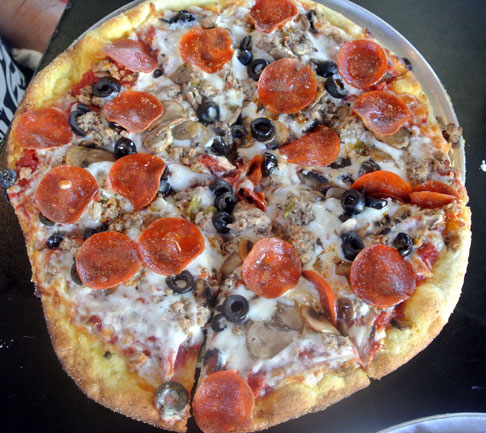 My brother George has the right idea! Rather than braving the motoring madness that is traversing New Mexico’s highways at breakneck speeds and risking life and limb contending with America’s worst drivers (according to a 2014 report by Wallet Hub), he’ll take the back roads every chance he gets. Not only does he avoid frazzled nerves and minimize potential encounters with distracted, drunk and demolition derby caliber drivers, he gets to enjoy the scenery of enchantment and arrive at his destination unscathed. His blood pressure is better than mine.

George will enjoy Santa Fe’s Back Road Pizza and not only because he doesn’t have to spend much time on Cerrillos to get there and not only because the street on which it’s situated has a posted speed limit of only 25 miles-per-hour. The pizza is very good, maybe even “worth risking rush hour to get there” good. Who says it’s good? The pizza-loving denizens of the City Different seem to accord it “best pizza” honors perennially in the Santa Fe Reporter‘s annual “best of” polls. It’s been one of Santa Fe’s “top 40 favorite restaurants” for more than eleven years running according to The Reporter who has also designated it the “counterculture surfer’s hotspot of choice.”

Okay, so the locals love it, but does its appeal translate outside Santa Fe? If you put much stock into a Guy Fieri seal of approval, then it does. The spike-coiffed star of the Food Network’s phenomenally popular Diners, Drive-Ins and Dives visited Back Road Pizza in 2011 and by all indications seemed to have enjoyed himself immensely. Not enough credibility for you? Well, in 2014, TripAdvisor’s Flipkey site compiled a “definitive list of the top pizza joint in each state worth traveling for.” Back Road Pizza was the Land of Enchantment’s honoree.

In 2014 alone, the Back Road Pizza may have been the most honored pizzeria in New Mexico with national and local media flocking to the City Different for the Pizza Different (flour crust rolled in cornmeal). Pizza Today, the self-professed “most powerful marketing tool in the pizza industry” singled out Back Road Pizza for “making a connection with local pizza aficionados.” Back Road Pizza was also named by USA Today’s 10 Best as “one of Santa Fe’s ten best restaurants.” There were a number of other honors in 2014, but you get the point.

True to its name, Back Road Pizza is “your off-the-beaten path, around-the-corner local neighborhood pizza shop that’s casual, fun, friendly and affordable.” Ensconced immediately east of the live/work studios within the Triangle District, its storefront isn’t readily visible from Second Street, but because you’re keeping to the posted speed limit (or at least you will be if you’re following my brother George), you’ll be able to turn around almost as soon as you pass by it.

Because of its metal exterior, the edifice which houses the Back Road Pizza could pass for anything from a gas station to an artist’s studio. It can’t be mistaken for anything but fun when you enter the premises. Behind serpentine corrugated metal panels is where the pizza production process takes place. Almost every other square inch of the restaurant has something to grab your attention, whether it be another “best of” certificate or a poster supporting an ecological cause. Weather permitting, an outdoor patio lends additional seating. Upstairs in a loft area, you’ll find pool tables.

Peruse the menu and you’ll quickly discern that Back Road Pizza is no one-trick pizzeria. The menu is surprisingly diverse, offering more than a dozen different pizzas (including gluten-free pies) in addition to submarine sandwiches, soups, salads and sumptuous appetizers. More than 25 different toppings are available so you can craft your pie to your exacting tastes. In addition to slices, you can order a pie ranging in size from small (12-inches) to extra large (19-inches). You’ll place your order at a counter, but everything will be delivered to your table.

Because a pizza is more than the sum of its individual ingredients and the way they’re put together, Back Road Pizza places a premium on quality, procuring many of its ingredients from local farms and producers whenever possible. All beef and pork used in making housemade meatballs and sausage come from the Talus Wind Ranch in Galisteo. Goat cheeses and fresh vegetables are acquired from the Camino de Paz School and Farm in Santa Cruz (the one in New Mexico, not the one in California). Everything on the menu is made from scratch. The quality shows!

Salads (available in full, half and side sizes) at too many pizzerias are either just an afterthought or a menu-filler. It’s almost shameful to see salads relegated to such levels of disrespect. That’s certainly not the case at Back Road Pizza where freshness, flavor and ingredient synergy will give you the impression that this pizza parlor could serve nothing but salads and be very successful in doing so. The beet and feta salad (spring mix, beets, feta cheese and roasted pumpkin seeds served with a housemade dill vinaigrette) is a winner. It took this salad to convince me beets don’t need to be roasted to be delicious. With their intensely earthy flavor and high sucrose level, the beets are tempered by the fabulously fetid feta and the tangy dill vinaigrette.

Back Road Pizza’s menu lists only four appetizers, three of which are “rolls.” Perhaps the most popular among the starters is Penny’s Bruschetta which was featured on Diners, Drive-Ins and Dives and which is highly recommended by the fabulous Billie Frank, USA Today‘s local expert in Santa Fe. We opted instead for the Cubano Roll, described as “all your favorite flavors of a Cuban sandwich rolled up and served with a homemade mustard dipping sauce.” While “all the flavors of a Cuban sandwich” may be present, its whisper thin slivers of ham and roast beef mean those flavors aren’t quite as bold as they are on a sandwich. What is bold is using sweet pickles instead of the more common dill pickles. The most exciting aspect of the Cubano roll is certainly the crust.

What makes the crust so unique and so special isn’t only that it’s made daily, but that it’s rolled in cornmeal using a rolling pin. The prep table is literally covered in fine cornmeal which renders the pizza delightfully crunchy, especially at its cornicione, an Italian term for the “lip” or puffy outer edge of the pizza. Because the pizza is so thin, there frankly isn’t much of a cornicione, but its crunch makes it discernible…and delicious. The crust makes a perfect canvas for the other high-quality ingredients.

Rather than opting for a build-it-yourself pie, savvy diners trust that the pizzaioli artisans in the kitchen know what they’re doing and know exactly what ingredients go best together. The Greek pizza, for example, is constructed from flavor-packed sun-dried tomatoes, briny Kalamata olives, thin slivers of artichoke heart and sharp, crumbled feta. These are tried and true ingredients you’ve probably had on a pizza elsewhere, but at Back Street Pizza, these ingredients are atop that magical cornmeal crust. That makes all the difference in the world!

Sometimes there’s a comfort level in partaking of the familiar. After all, even gastronomes don’t always want to eat only the new, strange and different. The Norm (black olive, mushroom, housemade sausage and pepperoni) is the epitome of familiar. In fact, a 2013 survey from delivery provider Foodler revealed that all four of the aforementioned ingredients are in the top seven from among the ten most popular pizza toppings in America. In the case of the Norm, familiar and popular doesn’t mean boring. The housemade sausage is very good and of course, there’s that cornmeal crust.

My brother George would scold me if I urged you to rush to Back Road Pizza. He would want you to get there safely…and slowly. Just get there!