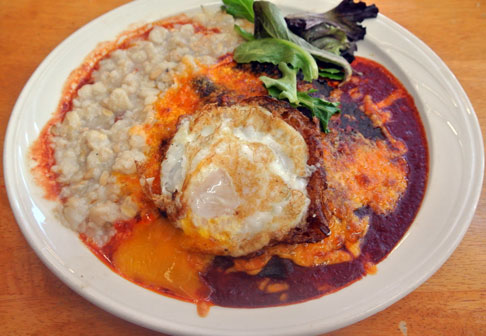 During the height of the Italian Renaissance, humanist-philosopher Leon Battista Alberti posited the notion that “a man can do all things if he will,” a notion that birthed the concept of the Renaissance man. More than the contemporary Army challenge for American soldiers to “be all you can be,” a Renaissance man was expected to embrace all knowledge and develop capabilities as fully as possible in the areas of knowledge, physical development, social accomplishments and the arts. Perhaps the very best example of a Renaissance man is Leonardo da Vinci, whose gifts were manifest in the fields of science, art, music, invention and writing.

Spend a few minutes with Ben Michael Barreras, chef and owner of the eponymous Ben Michael’s Restaurant on the fringes of Old Town, and you’ll quickly discern you’ve met a true Renaissance man. In his half century plus, he’s been (and still is) a pharmacist, a farmer, a contractor, a musician, a fisherman and a chef. Moreover, he’s a gentleman, emphasis on the word “gentle.” We found that out quickly upon asking if he carried Splenda or Equal. In a kind but serious tone, he admonished that he would never want to poison us with artificial sweeteners, emphasizing that as a practicing pharmacist, he subscribes to the Hippocratic edict to “let food be thy medicine and medicine be thy food.”

In that spirit, Ben Michael takes great pride in offering a menu replete with organic, locally raised ingredients. He doesn’t have to travel far to get many of them either. Behind the restaurant he lovingly tends to a small garden in which he raises seasonal produce such as arugula, pinto beans, beets and even chile. The bounty of his small garden may not be abundant, but the freshness and flavor of the produce he reaps is memorable. It’s the antithesis of the artificially ripened and synthetic-flavored vegetables to which diners are often subjected. What Ben Michael can’t grow himself, he sources from small area vendors who adhere to his standards and principles.

If you’re traveling on Rio Grande Boulevard just north of Old Town, you can’t miss the architectural anomaly that is Ben Michael’s Restaurant though you might mistake it for something else–perhaps an art gallery or an extension of Casa Talavera next door. To say it doesn’t subscribe to the adobe-hued homogeneity of Old Town area architectural standards is an understatement. Ben Michael’s stands out, not so much like a sore thumb, but like a defiantly tattooed finger. The restaurant’s unique architecture is reflective of Ben Michael’s individuality. He’s not someone you can typecast.

Neither is the restaurant he constructed in 1997, mostly with his own two hands. For the walls, he fashioned some 8,000 adobe bricks from mud in the arroyos behind the restaurant. He used an axe to cut aspens from the Jemez Mountains for the latillas on the ceiling which he hand-carved himself. He laid the bricks for the restaurant’s floor. Save for the modernity of his tools, his labors were similar to those undertaken by his ancestors (on both sides of his family) who settled the Duke City in the sixteenth century, Morning and mid-day sun illuminate the dining room which seems taller (at least twenty-five feet) than it does commodious.

Formidable as he is at construction, Ben Michael may be even more adept at building relationships. Amiable interactions with guests come easy to the genial restaurateur. So do firm abrazos for the friends and neighbors who drop in for a quick visit and a steaming cup of organic coffee. Guests and friends alike drop in on Burque Blues Tuesday or Jazz Wednesday when Ben Michael lets his hair down and tickles the ivories on the piano at the corner of the restaurant.

Music, ambiance and great conversation aside, if you’re at Ben Michael’s for lunch there are two things of which you should be aware. First, you’d better have some time on your hands. Ben Michael prepares everything to order and may well be a one person operation, serving as your chef, server, cashier and host. Second, don’t expect a compendium of every New Mexican dish you’ve ever had. To say the menu is abbreviated–three entrees, three appetizers, a salad and two desserts during a visit in January, 2015–is an understatement. While the menu may not be comprehensive, it’s got more than its share of surprises.

Unless you’ve been to a very authentic Spanish or Portuguese restaurant, for example, you probably haven’t seen an appetizer offering of sardines and Spanish cheese served with bread. My dad loved sardines, a trait only one of his six children (guess which one) inherited. Because my Kim dislikes sardines intensely meant they were all mine. Ben Michael pan-fries the sardines in olive oil along with sauteed white onions. It’s a delicious departure from the predictable cavalcade of appetizers at New Mexican restaurants. The Spanish cheese, a firm, rindless white cheese is cubed and delicious.

It’s rare to declare a salad as the one “must have” item on a menu, but if ever that designation is deserved for one sole item, it’s tailor-made for the organic salad at Ben Michael’s. There is no one standard template for constructing the organic salad. In fact, don’t be surprised if Ben Michael excuses himself briefly to step out back to retrieve the seasonal ingredients with which to construct your salad. Ours was made with fresh, crisp greens; chopped, raw beets; organic walnuts; shredded Spanish cheese; salty, briny olives and luscious figs with a housemade Balsamic vinaigrette. It’s organic artwork on a plate, a truly terrific salad.

Soon after placing my order for chicken enchiladas, the unmistakeable whirring of a blender and the melodic sound of a freshly cracked egg (organic) sizzling and spitting on a frying pan could be heard. It was the sound of Ben Michael preparing my lunch. More specifically, he was grinding red chile from pods for my enchiladas. It’s an outstanding chile (among the very best we’ve had in Albuquerque) with a pleasant piquancy and deep, rich, earthy flavor. Not surprisingly, it was chile grown by the chef himself. The enchiladas are an outstanding option. They’re made flat and ooze with melted Cheddar and the gooey goodness of an egg fried over-medium, all good, but made transformative thanks to that chile.

In a consumer economy dominated by fast food and mystery meat burgers, it’s refreshingly rare to find an organic burger. The difference is significant. At Ben Michael’s, the organic burger is constructed from hand-formed ground beef and served with crisp, fresh salad greens (ask the chef to drizzle on some of the house vinaigrette) and a side of cubed papitas. Every burger should be as fresh and delicious.

Only two desserts festoon the menu, a chocolate mousse and a flan which renders Ben Michael poetic. He raves about the flan and eagerly awaits your verdict at first bite. It’s a wonderful flan, second only to Chef Estevan Garcia’s organic goat milk flan when he helmed Tabla De Los Santos. An addictive intoxicating caramel wafts through the air when you pierce the flan with your spoon. It’s a light flan served cold and it’s as good as Ben Michael says it is.

After you finish your meal and if he’s not inundated with guests, Ben Michael might just invite you to visit his small pharmacy on the premises. Similar to the abbreviated menu, it’s not nearly as well stocked as other pharmacies in Albuquerque, but you can trust that what Ben Michael chooses to keep in stock has the healthful qualities this Renaissance man values.