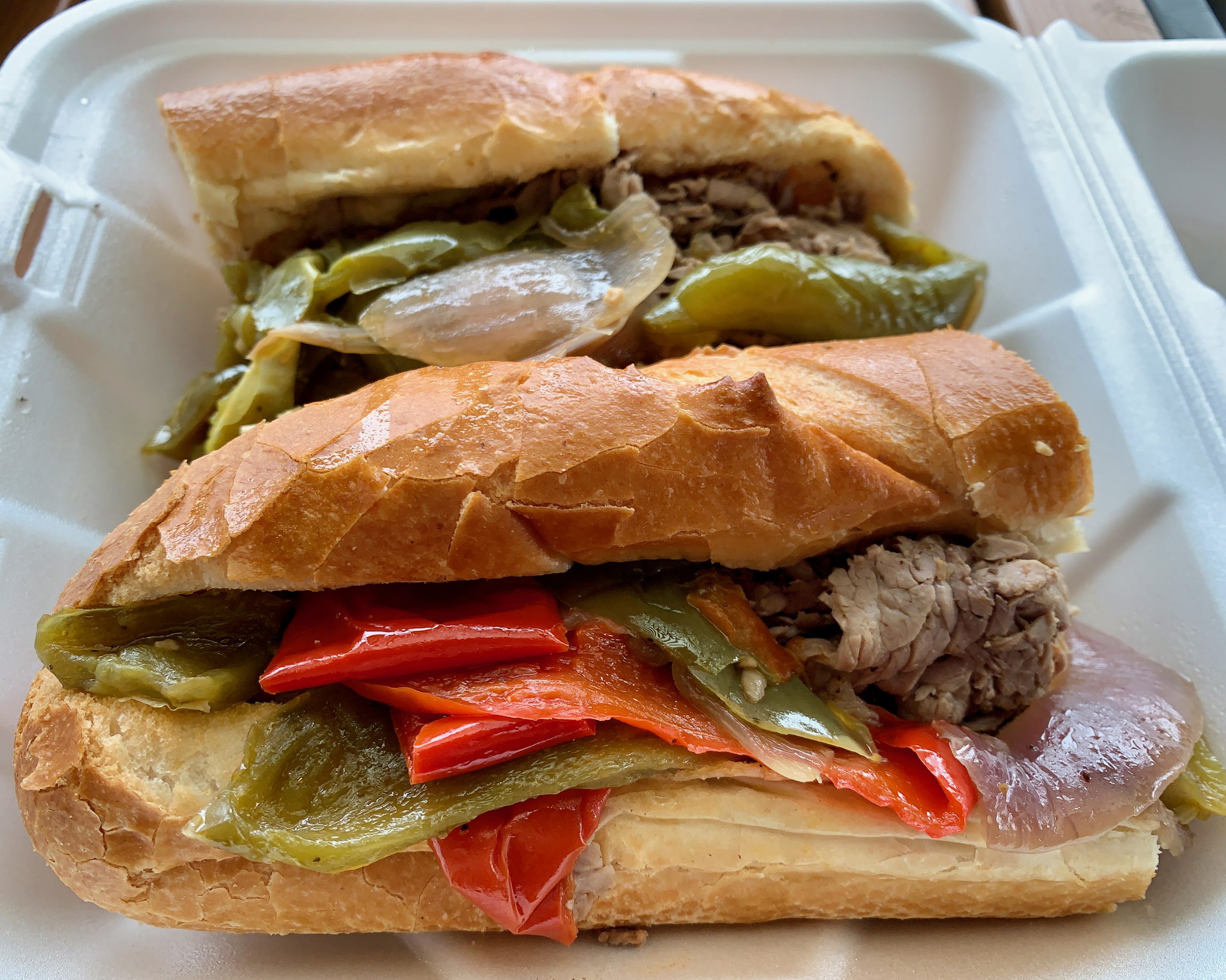 My Kim usually leaves the recitation of movie or television quotes to me (apparently it’s a guy thing), but every once in a while she’ll surprise me with an utterance or exclamation she could have picked up only from the big screen or idiot box.  When we strode into DeFalco’s Italian Eatery & Grocery, she approached an employee and–doing her best to channel New Jersey mobster Tony Soprano–asked “where’s da gabagool?”.  She had no intention of buying gabagool and doesn’t even like the stuff much.  The moment just seemed appropriate.

Here we were in an Italian grocery brimming with comestibles you’d find at the best East Coast Italian delis and my Kim followed up her question with “gabagool is nothing but fat and nitrates ,” a line uttered by Meadow Soprano.  The Dude and I were looking for a hole to crawl into.  Fortunately the employee was also a fan of The Sopranos and had undoubtedly been asked about gabagool before, albeit probably not with a slight Chicago accent trying to sound like a New Jersey mobster.

If you’re not a fan of The Sopranos or may have missed a 2009 episode of The Office in which Michael tried to impress his new Italian-American friends by ordering “just the gabagool“, you might be wondering che diamine is gabagool.  Esquire puts it succinctly: “Formally known as capicola, gabagool is by no means the most trendy or popular of the Italian cold cuts, but it is the most fun to say.”  Just how did capicola come to be known as gabagool?  Esquire explains that, too, stressing that “The word ‘gabagool’ is about as Italian as apple pie.”

Capicola, it seems, has a bit of an identity problem.  You can call it “capocollo” or “coppa” or “capicola” and yes, even “gabagool” but  all these terms refer to the same thing: an Italian meat product.   More specifically, it’s a traditional, thinly sliced Italian pork cold cut that comes from pork shoulder or neck.  It’s typically served on antipasti, paninis and sub sandwiches as well as traditional Italian pizza.  Its versatility is only one of the reasons it’s so popular.  Some (not my Kim) find it delicious.

Capicola…er, gabagool, is just one of many imported or housemade Italian meats you’ll find at DeFalco’s deli.  The list of meats is impressive: imported Parma prosciutto, housemade chevalatta sausage (cheese and parsley), housemade Italian sausage (hot or mild), mortadella, pepperoni, Genoa salami, soppressata and so many more just thinking about them will make you drool.   DeFalco’s  also has a turophile’s bounty of imported and domestic Italian cheeses to pair with the meats: Ponte Reale burrata di bufala, imported Reggiano Parmesan, Romano, Ricotta, Provolone and more.

Also available for purchase are a number of pastas, olives, spreads and toppings, sauces, desserts and beverages.  It would take hours to peruse the deli alone not to mention shelves which are replete with imported canned goods.  It’s what an Italian home cook’s version of heaven must be like.  For Italophiles who love the cuisine of Lo Stivale…or at least New Jersey, DeFalco’s offers a menu featuring soups and sides, salads, cold sandwiches, hot sandwiches, pizza and calzones, pasta, desserts, beverages and extras.  Italian Eatery and Grocery indeed.

When Diners, Drive-Ins and Dives host Guy Fieri visited DeFalco’s in 2013, he wondered out loud how an Italian deli could migrate from Toronto, Canada to Detroit, Michigan to three different locations in the Phoenix area.  Its most recent encampment is in a small strip mall in Scottsdale.  DeFalco’s has been serving Phoenix area residents since 1972, nurturing recipes that have been handed down for more than a century.  The family remains stalwart in its commitment to using high-quality ingredients sourced from reputable vendors or made on the premises.  The quality is telling in the aromas that envelop you from the moment you walk in.

Deciding just what to order proved a challenge.  Fortunately the menu is segmented so you only have to focus on one thing at a time (soups and sides, for example).  Having espied an enticing photo of the arancini on DeFalco’s website, we absolutely had to have one of each–beef and cheese and spinach and cheese.  Both golden orbs are about the size of a golf ball and are coated with a light batter.  Each is overstuffed and served with a housemade spaghetti sauce (90-year-old recipe) for dipping.  The acidity of the tomatoes was a bright compliment to the crispy exterior shell and perfectly prepared rice inside.   Our favorite of the two was the beef and cheese arancini.  My Kim, by the way, wondered if The Office’s Michael would confuse arancini for a spider.

Despite having watched Guy Fieri practically have a foodgasm over DeFalco’s Italian sausage sandwich with peppers an onions, my Chicago born-and-bred bride had to see for herself if an East coast style Italian deli could prepare Italian beef sandwich (thin-sliced roast beef dipped in au jus on a toasted roll with fried peppers and onions) as well as her place of birth.  Her verdict–not as good as the one she enjoyed four days previously at Portillo’s.  I was much more enamored of the drippy, messy variation on the French Dip that she was.  The razor-thin beef was seasoned just as well as the truckload of Italian beef sandwiches we’ve had in Chicago.  The red and green peppers and onions were prepared just enough to bring out their natural sugars and fruitiness while retaining a crisp texture.  The bread is only slightly crumbly and absorbs the au jus very well.

Obviously Guy Fieri didn’t influence my menu choice either. I was in a classic “Parm” mood and Scottsdale area Yelpers declared DeFalco’s chicken Parmigiana the second best in the city.   This Italian comfort food dish–breaded chicken breast covered in tomato sauce and blanketed by molten mozzarella–became an obsession during my time in Massachusetts.  Unfortunately, much of the chicken Parmigiana I’ve had since then has been reminiscent of thin, overly breaded, overly sauced cardboard.  DeFalco’s version is much thicker and not nearly as breaded as most chicken Parmigiana.  The sauce is fairly unadulterated in that the acidity and tangy fruitiness is allowed to shine.  There was just enough mozzarella.  The chicken Parmigiana was served with your choice of spaghetti, mostaccioli/penne, fettuccine, linguine or capellini (angel hair).  My choice was mostaccioli, a dish my Kim last made for me in England.

Dessert options include so many wonderful Italian favorites such as tiramisu, chocolate tartufo cake, mascarpone/lemoncello cake and of course, cannoli (traditional or with a chocolate shell).  Whatever posses me to order the Napoleon, a “classic Russian cake made of very thin and flaky puff pastry cake layers and a smooth, rich and luscious pastry cream in between the layers?”  In my 39-years, I’ve enjoyed exactly one Napoleon.  The rest I choked down.  This one was somewhere in between, not something I’ll order again, but not a dessert I’d throw off my table.  Next time it’ll be the chocolate tartufo cake, what my friend Becky Mercuri would have ordered.

My Kim, who’s obviously much smarter than her movie-quoting husband, ordered something she actually liked–a traditional cannoli. This is a dessert so beloved across the metropolitan area that DeFalco’s version was named one of Phoenix’s 100 favorite dishes by the Phoenix New Times.  Here’s what the Times had to say: “When a cannoli is good, it is so dang good. From the flaky, crunchy pastry shell to the rich, creamy ricotta filling, DeFalco’s does the classic Sicilian confection right. Dangerously priced at just $2.75, you can easily justify ordering one or two or 10 of these babies, though the caloric content isn’t nearly as guilt-free as the price.”  We kicked ourselves for not having ordered ten!

DeFalco’s Deli may seem a bit out-of-place in the Arizona desert, but locals, transplants and visitors like me hope it never migrates again.  DeFalco’s is one snowbird everyone loves.