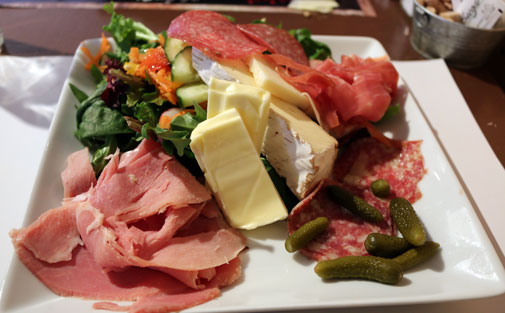 Many years ago before my first trip to France, I took an inventory of how many French words I knew, arriving at somewhere near that magical number of 3,000. While knowing that many words in English would make me fairly conversant, knowing 3,000 words in French (from a language boasting of 100,000 words) certainly didn’t endow me with conversational fluency. Not even close! French orthography, the spelling and punctuation of the French language, comes easy for me compared to pronunciation. If you’ve ever seen the episode of Friends in which Joey Tribbiani attempted to speak French, you’ll know of what I speak.

While enjoying the relaxed ambiance and luxuriating in the intoxicating aromas of freshly roasted coffee at Clafoutis French Bakery and Restaurant in Santa Fe, my ears perked up upon hearing a Mexican server and Mexican busboy merrily greeting guests with “Bonjour Madam” or “Bonjour Monsieur” as appropriate. It brought to mind my own failed attempts at speaking French at a sidewalk café in Normandy lo those many years ago. In Spanish I asked the busboy how much French he could actually speak and smiling shyly, he admitted to not knowing more than a handful of words. That, however, was not the case with Samantha, our statuesque server.

Samantha, a Rutgers graduate who majored in theater and guided us through an exquisite meal, is conversant in both French and Italian. She even taught us how to pronounce Clafoutis, prompting Kim to chide me “I told you it wasn’t Claw Footies.” Kim did a much better job at reciprocating all the “merci beaucoups” and “sil vous plaits” than I did. Decades-old memories of speaking French like Aldo the Apache (the Brad Pitt character in Inglorious Basterds) had rendered me more than a bit bashful. Samantha, similar to most (but not all) servers in France, was very patient and kind, grateful that we would make the effort to engage her in French.

Named for a luscious French dessert made by baking fruit in a custard-like batter, Clafoutis could just as easily be named Déjà vu for the “haven’t I been here before” sensation you experience as you take your place in the long queue of guests waiting to for a table. More than any other French restaurant we’ve visited in New Mexico, Clafoutis looks, feels, smells and tastes like the French cafes of my travels to France. That’s not just my experience. Santa Fe’s scintillating four-time James Beard Award-winning author Cheryl Jamison describes Clafoutis as “pretty much like a mini-trip to France and, to me, that pretty much equals a trip to Shangri-La.”

On her 10Best column for USA Today, Billie Frank, one-half of the fabulous Santa Fe Travelers notes that this “bustling boulangerie/patisserie…will take you to Paris.” Or at least Paris meets Santa Fe. Clafoutis is located at the northern terminus of Guadalupe Street next door to a Land of Enchantment landmark, a LotaBurger. You’ll want to heed Billie’s advice: “Parking is a bit challenging here. Arrive at 7AM when they open or mid-morning after the early rush.” We arrived shortly before noon and faced the dual challenge of finding a place to park as well as having to stand in line behind a dozen or so equally ravenous diners. Those ravenous diners became rather long-faced when they were finally seated only to find the pastry case nearly empty and learning that the beignets (a Saturday morning special) had run out.

Because of close proximity seating, you can practically imbibe all the aromas and flavors of dishes being delivered to your neighbors. It exacerbates the challenge of deciding what to order. You’ll likely change your mind several times before deciding, but it’s probably impossible to make a bad choice. The lunch menu is organized into categories: les quiches, les salads, soup al’oignon (onion soup), les sandwiches, les bruschettes, les crepes and los croques (Croque Monsieur and Croque Madame). Entrees are spelled out in French with English translations immediately thereafter. Descriptions of each item are in English. Your server will recite the specials of the day.

If the daily special is the duck salad, shout your order if you have to, just don’t miss out on one of the best salads you’ll have. This entree features a generous number of duck breast medallions seared to a lovely pinkish hue in the middle with a slightly caramelized crust on the outside. With a fatty (but not greasy) richness, moistness and tenderness, the duck may be the star of this stunning dish, but it’s got an excellent supporting cast: juicy and tart grapefruit slices, walnut halves, fresh greens and a light drizzling of Dijonnaise dressing. The Dijonnaise leans much more toward mustardy qualities than it does mayonnaise. That’s a good thing for those of us who appreciate lively flavors.

In the spirit and tradition of the Charcuterie, Clafoutis offers an L’Assiette (French plate) brimming with cornichons, ham, prosciutto, hard salami, pearl onions, cheese, mixed green salad, butter and brie. It’s nearly everything the French version of Dagwood would want on a sandwich. Indeed, if you are inclined to pile onto the accompanying sliced baguette, you could have several beautiful sandwiches. Alternatively, you could savor each and every morsel of these French “cold cuts” sans pain (bread). For palate cleanser in between meats and cheeses, don’t use the cornichons, delightful little French baby “pickles,” with a zesty, tangy snap. Instead delight in the simplicity of French butter on baguette slices. We often crossed the English channel just to pick up bread, butter, cheese and wine. Clafoutis reminded us how thoroughly enjoyable those experiences were.

There are a number of superb options on the sandwich menu. Unlike their American counterparts, most sandwiches in Europe don’t tend to be adorned with so many ingredients piled on that you lose a sense of what it is you’re enjoying. Sandwiches at Clafoutis tend to have no more than a few ingredients, including lettuce and tomatoes. As with the bakery-fresh sandwiches we enjoyed in Europe, butter and not mayo or mustard, is the preferred condiment on several of the sandwiches. The Sandwiche au Prosciutto (prosciutto, butter, tomatoes and lettuce) is an exemplar of why butter is sometimes better than say, mustard. The saltiness of the prosciutto and the tanginess of mustard would cancel one another out. The fresh, creamy butter allows the prosciutto to shine. Sometimes it’s the simple touches that work best.

Savory and dessert crepes are offered all day long as are the large house waffles. For us there is no better crepe than one topped or stuffed with Nutella then heaped with a scoop or two of ice cream. That’s how we ordered our crepe at Clafoutis though we also asked for jam which, thankfully was presented on the side in tiny jars we took home. It took one bit for both of us to proclaim these the best crepes we’ve had on this side of the pond. Thankfully we were given spoons with which enjoy the crepes because stabbing someone with a spoon isn’t as painful and we both wanted the last morsel of that crepe.

Julia Child once said “In France, cooking is a serious art form and a national sport.” Be that the case, Clafoutis is a gold medal winner, an absolutely wonderful piece of French heaven meeting enchantment in New Mexico.