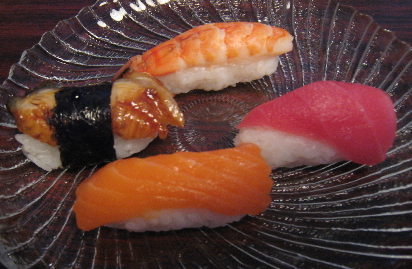 Years ago I co-managed a project with a diminutive Vietnamese lady who later left the company and moved to San Diego.  What she looked forward to most about moving was not proximity to her family, but the availability of all-you-can-eat (AYCE) sushi bars in Southern California.

“How good can AYCE sushi be?” I opined.  We found out during a 2001 visit to Makino in Las Vegas, Nevada that AYCE sushi can be pretty good indeed, especially if your quest is for gigantic portions of inexpensive sushi.

It wasn’t until late 2004 that the first AYCE sushi restaurant was launched in Albuquerque and as it turns out, it’s almost on par with Makino, a pretty highly regarded Sin City sushi parlor.

Sushi Gen, may in fact, be equal to or better than several of the much more expensive sushi restaurants in the Duke City.  That may be more a testament to the quality of sushi at Sushi Gen than an indictment of the state of sushi in Albuquerque.  To be honest, you can find better sushi in Albuquerque, but you’ll pay a premium for it.

Sushi Gen is small enough to be intimate, big enough to be comfortable.  There’s nothing remarkable about the decor, but the service is generally polite and attentive while the made to order sushi is much more than passable.

In comparing the AYCE menu to Sushi Gen’s standard menu, you’ll find–with the exception of several specialty rolls–many of the same maki (roll) style and nigiri (a piece of fish on a bed of rice) style sushi offerings.

A single, alternating specialty roll is offered with the AYCE option.  If Buddha is smiling on you, it’ll be the dragon roll, a visually appealing, avocado colored masterpiece featuring crabmeat.  More than likely, however, it will be the multi-hued, multi-seafood rainbow roll (pictured below left).

You might be tempted to order everything on the menu (and we almost have), but it’s advisable to pace yourself and savor the flavor surprises in every bite.  Sushi Gen has instituted a per piece “pay for any wastage” policy that includes sushi rice.

The maki style rolls, whether featuring raw or cooked fish inside, are very well crafted and are almost as esthetically appealing as they are delicious.  We can’t agree on a favorite as we’ve liked them all, but the spicy tuna may have a slight edge over the crunch roll.  Holy mackerel, Batman!  Sushi Gen even does mackerel (nigiri style) well, a rarity in the sushi world.

Even better is the grilled unagi (eel), a nigiri style sushi, which is said to have stamina-giving properties.  Containing 100 times more vitamin A than other fish, unagi is believed to heighten men’s sexual drive.  Japanese wives would prepare unagi for dinner to suggest to their husbands that they want an intimate night.  After waddling out Sushi Gen’s door, intimacy is the last thing on our minds.

Like many sushi restaurants, every meal at Sushi Gen starts with a simple salad (almost entirely lettuce).  A sweet vinegar dressing instead of the more common ginger dressing is drizzled on parsimoniously.

Also served before any sushi arrives at your table is a bowl of warm miso soup.  Very little, if any, tofu distinguishes this miso soup from what we’ve had at other restaurants.  Instead, the only prevalent ingredient seems to be wakame seaweed.

A unique restaurant specialty is an “oyster shooter,” a drink made with raw oysters, sake and seasonings.  Another version is made with sea urchin.

If you’ve ever been traumatized by how quickly ordering sushi on a piecemeal basis, Sushi Gen may be the answer for you.  It may not be the best sushi in Albuquerque, but it’s very good sushi, especially for the price.