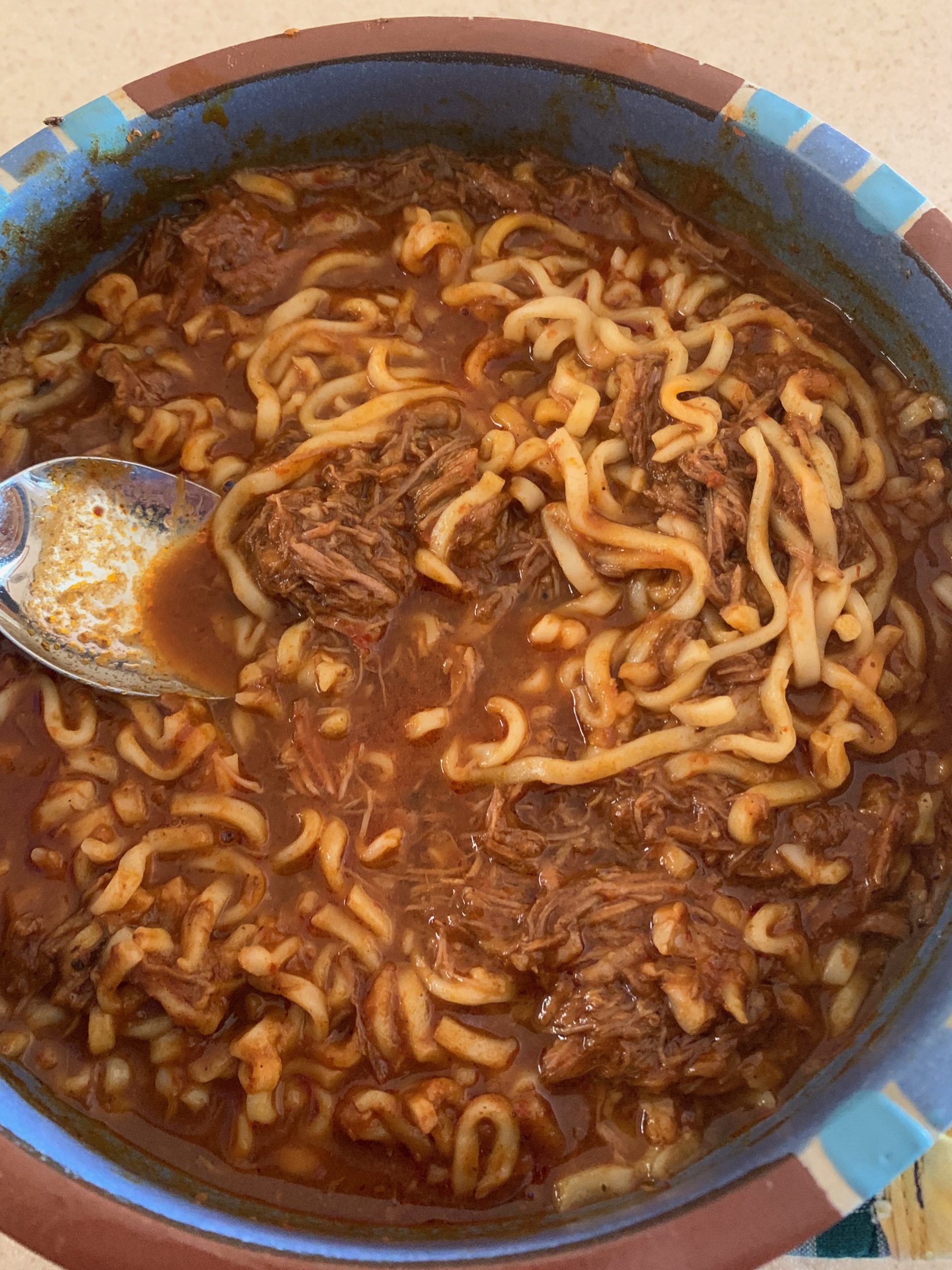 If you’ve noticed an almost inordinate number of recent visits on this blog to Mexican restaurants, credit much of that to Pati Jinich, ebullient host of the James Beard Award-winning and Emmy nominated PBS series Pati’s Mexican Table.   Although we record the Saturday airing of Pati’s Mexican Table, we don’t usually watch it until Sunday…right before lunchtime.  It’s no wonder, therefore, that what we’ve been craving for lunch is Mexican food.

It’s nigh impossible not to be utterly charmed (if not outright besotted) by the lovely Pati Jinich.   Her huge likeability quotient is the byproduct of a genuine warmth and self-effacing humor which come across with her every thickly-accented utterance.  She’s down-to-Earth and genuine, taking absolute joy in  broadening and sharing her expansive knowledge about the colorful tapestry known as Mexican cuisine.  In every episode, Pati embarks on an educational and entertaining journey.  Each dish she encounters serves as a launching point into explorations of the rich and diverse history and culture of her country of birth.

In season eight (episode 811), which aired in January, 2019, Pati explored Sinaloa, “Mexico’s Bread Basket,” which produces about 40% of the meat and produce consumed in all of Mexico.  Inspired by Sinaloa’s bounty and culinary traditions, she then prepared birria in her kitchen at home, sharing her recipe with the 65.5-million viewers who tune in to watch her every week.  Her teaching style is not the professorial preciseness of an academic, but the loving patience of a best friend sharing a recipe which makes her happy.  As always, this episode had us clamoring for the foods she so richly described–especially the birria.

At the time birria was just starting to make significant inroads into the Albuquerque metropolitan area. A KRQE News segment not quite twenty months later (25 August 2020) apprised viewers that “The latest taco craze has hit the Albuquerque metro. Restaurant owners say many of their customers have never heard of birria tacos but they’ve quickly become a best-selling item.”  The segment listed several purveyors of Mexican food who offer birria, including Changos and Birrieria Y Tacos Alex Tijuana Style.

By sheer coincidence, we had visited Birrieria Y Tacos Alex Tijuana Style (fittingly, it’s not only the food truck’s name that’s a mouthful) just three days before the KRQE feature.  As the blazing noon sun beat down on a long queue of mostly socially distanced, mask wearing, hungry diners, the enticing aroma of birria answered the question for us as to why anyone in their right mind would stand in line–no shade in sight–for food that’s even hotter than the 96-degree day.

Before prowling the mean streets of Albuquerque as a food truck, Birrieria Alex was a small brick-and-mortar restaurant on 4th Street.  Some of you might recall that the great Ari LeVaux, erstwhile food critic for the Alibi waxed poetic about its birria, calling it “the one thing you must order.”  Since its launch as a food truck, Birierria Alex has been stationed mostly on 4th Street just south of Alameda though shortly after our visit, it relocated to the 4th Street complex that houses Pop Fizz.

Let’s not go any further before discussing what exactly birria is.   Texas Monthly’s taco editor (the job I’d kill to have) José R. Ralat describes birria as “a stew” which “can be made with goat, it can be made with beef, it can be made with lamb. You can’t really say that one is more authentic than the other. Barbacoa can be made with anything. It’s a process, a method—not an item. Everyone adds something a little differently.”  Hmm, birria made with tofu…it just doesn’t sound as appealing as goat, beef or lamb.

Angelo Orona, who runs the popular Facebook group, Tacos of New Mexico told KRQE that birria is “very photogenic. When you see people consuming and eating birria, they’re typically dipping it in this really savory sauce and it just looks great.”  Indeed, that “really savory sauce,”  birria de consomé is one of the first items listed on a rather abbreviated menu.  Many diners use it as a dip for their birria tacos even though it’s not really a dipping sauce.  We had the consomé sans tacos de birria.  The lava-red consomé broth, flecked with onion and floating cilantro steams with the promise of spice and piquancy.  Thin strands of finely shredded beef aren’t as plentiful as we would have liked, but that didn’t make the consomé any less satisfying, even on a sweltering late summer day.

Let’s ruminate (or is that raminate) about ramen, the Japanese noodle dish that swept the fruited plain a few years ago.  Birrieria Alex blows away every paradigm of what ramen should be with its fusion of ramen noodles and tender tendrils of birria.  It’s a blend which works very well as the noodles absorb the condiment-rich consomé, forming a melt-in-your-mouth marriage of Japan meets Mexico concepts and ingredients.  Biria Ramen proportions aren’t exactly half ramen, half birria, but the results are fully satisfying and surprisingly delicious.

The Taco Trail website, online home of José R. Ralat, Texas Monthly‘s taco editor, posits that “if Mexico, were to have an iconic taco, it would be the taco al pastor” and goes on to describe them as a “bantam assembly of marinated pork shaved from a trompo (a vertical rotisserie) on a corn tortilla with pineapple, cilantro, onions and salsa is the object of lust for many taco enthusiasts.”  While tacos al pastor have become pretty commonplace in New Mexico, not all of them are constructed from pork sheared from a trompo.  Birrieria Alex’s tacos al pastor are!  They’re served with an excellent guacamole instead of salsa, grilled onions instead of chopped, cilantro and the ubiquitous lime.  Very few tacos al pastor in New Mexico are even in the same league with these.

Two of the most popular meats in Mexico are birria and barbacoa.  In addition to their reputed ability to cure a hangover, the two actually have quite a bit in common.  The website Eat Mex City explains “The primary reason for the common confusion between birria vs barbacoa is because of birria is a product of barbacoa. Birria is made by submerging barbacoa in a sauce.”  Other culinary experts will argue it’s not that simple.

For years, my preference has been barbacoa, especially when served on a torta just as it’s done in the Mexican state of Chihuahua.  My very favorite torta in the known world is the torta de barbacoa from Elotes Del Rancho, but I certainly wouldn’t kick the torta de barbacoa from Birrieria Alex off my table.  The biggest difference between the two is the bread.  Both versions use a soft telera bread, but while Birrieria Alex’s telera is merely wonderful, Elotes’ telera is otherworldly.  Elotes’ also gets the nod for superior salsa, but Birrieria Alex uses a better melted cheese.  Both are life-altering.

In season 8 (episode 813) of Pati’s Mexican Kitchen, Pati visited the city of Tucson, “a city that claims to have the best 23 miles of Mexican food anywhere in the world.”  As an unabashedly proud New Mexican, I’d love to invite her to Albuquerque for “better than the best” Mexican food she found in Tucson.  It’s easy to imagine my “chef crush” enjoying the birria at Birrieria Y Tacos Alex Tijuana Style.