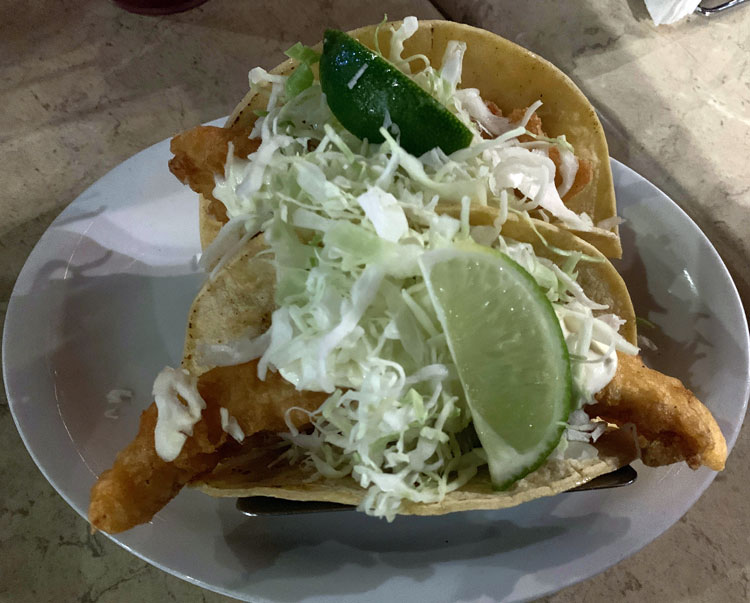 For years, fish tacos have been one of those popular, almost faddish obsessions which have garnered more attention and affection than cynics like me believe is warranted (much the same way some of us feel about Beyonce and anything Kardashian).  It’s always been well beyond my capability to understand why fish tacos have been so highly regarded.  Sure, my Kim and I have had a number of good to very good fish tacos, but we’ve never had a truly transformative, eye-opening “now I get it” fish taco.  Not even in San Diego.  Certainly not in New Mexico.  Apparently, we’re not the only ones.

Legendary gifted raconteur Anthony Bourdain didn’t get fish tacos either (or for that matter, Nashville hot chicken).  He didn’t necessarily deride them as he did airline food, ranch dressing or vegan food, but when he did more than acknowledge them, it was usually with the same enthusiasm he expressed for Frito pie.  So, when he proclaimed the fish tacos at Shanghai Reds “truly extraordinary; truly, truly, extraordinary,” we knew we had to find out for ourselves if all those rare superlatives from Bourdain were warranted.

Great fish tacos in the desert?  In a Chinese restaurant?  We asked ourselves those questions, too.  Shanghai Reds within the Fisherman’s Market & Grill lives up to Bourdain’s panegyrics…and everyone else’s, too.  For seventeen consecutive years, the high desert dining public has accorded “best seafood restaurant” honors to the famous seafood market.  You can’t attribute that love to the scalding summer sun beating down on locals nor to the relative scarcity of seafood restaurants in the area.  Bubbly television personality Rachael Ray came to the Coachella Valley for the Food Network’s “$40 a day” program and declared, “In my book, Fisherman’s Market & Grill is a hole-in-one!”

As for the quaint appellation, Shanghai Reds is actually named for a 1920s waterfront dive bar in San Pedro, California frequented after work by longshoremen who would stop in for whiskey and fish tacos.  Despite its rough and tumble neighborhood location, Shanghai Reds was like a second home to the hard-drinking stevedores.  The coastal look and feel beloved by dock workers has been duplicated in Shanghai Reds’ Palm Springs and La Quinta locations, lacking only the salty sea air and roughneck patrons.  You can almost picture yourself sitting by the water waiting for the catch of the day to be ferried over to your table.

The Fisherman’s Market website boasts of “the highest standards that simply can’t be beat.   What does this all mean? It means they source their own fish, handle it, prepare it, and serve it, so you can always count on consistency and the best in a dining experience. Their quality assurance staff oversees this process from the fishing markets to your plate. The benefit? You get the finest quality seafood at the best prices!”   It may sound almost too good to be true, but we can attest these are campaign promises well kept.  Shanghai Reds at the Fisherman’s Market delivers!

As you approach the yawning space ensconced in a modern strip mall, you’ll certainly do a double-take.  An expansive outdoor seating area, the Shanghai Reds portion of the complex, faces the parking lot. Patio heaters are positioned in close proximity to every table, but they’re primary for thin-blooded locals.  Out-of-towners like us wore short sleeves.  Beyond the sweeping patio is the Fisherman’s Market with its own seating area.  Throughout our delightful visit, pescatarian patrons queued to procure their favorite seafood bounties.  A slate board lists market prices, all reasonable.

Because the promise of transformative fish tacos brought us to Shanghai Reds, we opted for an a la carte order of two Baja fish tacos instead of an appetizer.  In just about three bites we understood, finally achieving the “wow” moment epiphany that had long eluded us.  These fish tacos were indeed “truly extraordinary; truly, truly, extraordinary.”  Our revelatory experience quickly confirmed what had been so wrong about every other fish taco we’d ever had, even those we had though to be pretty good.  Most fish tacos are too centered around cabbage slaw, very often to the detriment or complete neglect of the fish itself.

At Shanghai Reds, it’s all about the fish.  The cabbage slaw, while terrific, plays a supporting role.  It lets the perfectly fried beer-battered Alaskan cod shine…and shine it does.  The cod extends well beyond the confines of the soft corn tortilla.  It’s all fish–light, flaky, delicate white fish not heavily breaded and not air-filled.  It’s fresh and absolutely delicious on its own.  A simple mayo-based sauce (mayo, milk, garlic, white pepper, lime juice, and a “secret sauce”) lightly applied gave the crispy cabbage slaw a bit of binding and just enough contrast to play off the fish.  A squeeze of lime imparts a slight tanginess, but is wholly unnecessary.

During almost all of my visits to San Francisco, one of America’s truly great culinary hotbeds, the one dish I absolutely have to partake of is cioppino, a fish stew whose genesis is indeed the City by the Bay. In Albuquerque cioppino is almost as rare as hanging ten on the Rio Grande and when you can find it, it’s just not as fresh as what you’ll find near the Pacific coast. Cioppino is a very nuanced dish that takes on the personality of the seafood from which it is constructed as well as the distinct seasonings which give it its kick.  Shanghai Reds cioppino (clams, mussels, shrimp, scallops, crab and white fish in a spicy tomato broth) is nearly as good as the cioppino in the city where Tony Bennett left his heart.  The netful of seafood tasted as if it caught fresh earlier in the day.

In our 33 years together, my Illinois bride has gone from a traditional and staid midwest meat and potatoes diet to enjoying almost everything her adventurous lesser half likes–with few exceptions.  She still doesn’t like most seafood, save for lobster.  Give her a steak any day.  Shanghai Reds’ “reel surf n’ turf” (succulent rock lobster with a “juicy, tender chargrilled prime steak”) fulfilled both her landlubber’s side and her crustacean cravings.  Unlike their New England brethren, rock lobster are found only in the world’s warm seas and they don’t have the large claws associated with lobsters.  What they do have is a sweet, succulent flavor just beckoning for warm butter.  The chargrilled prime steak was moist, delicious and perfectly prepared at medium.

Somewhere someone has probably done a study to determine why dining on seafood evokes a postprandial desire for key lime pie.  Or maybe it’s just us.  Though other options are available on the Shanghai Reds dessert menu, every time we enjoy seafood, we have to enjoy key lime pie with it.  Shanghai Reds version is just what key lime pie should be–tangy enough to purse your lips a little, creamy enough to make you swoon and absolutely delicious.

Shanghai Reds at the Fisherman’s Market & Grill may not have a dockside presence, but it looks, feels and tastes like one of the very best seafood restaurants you’ve ever been to near the ocean.