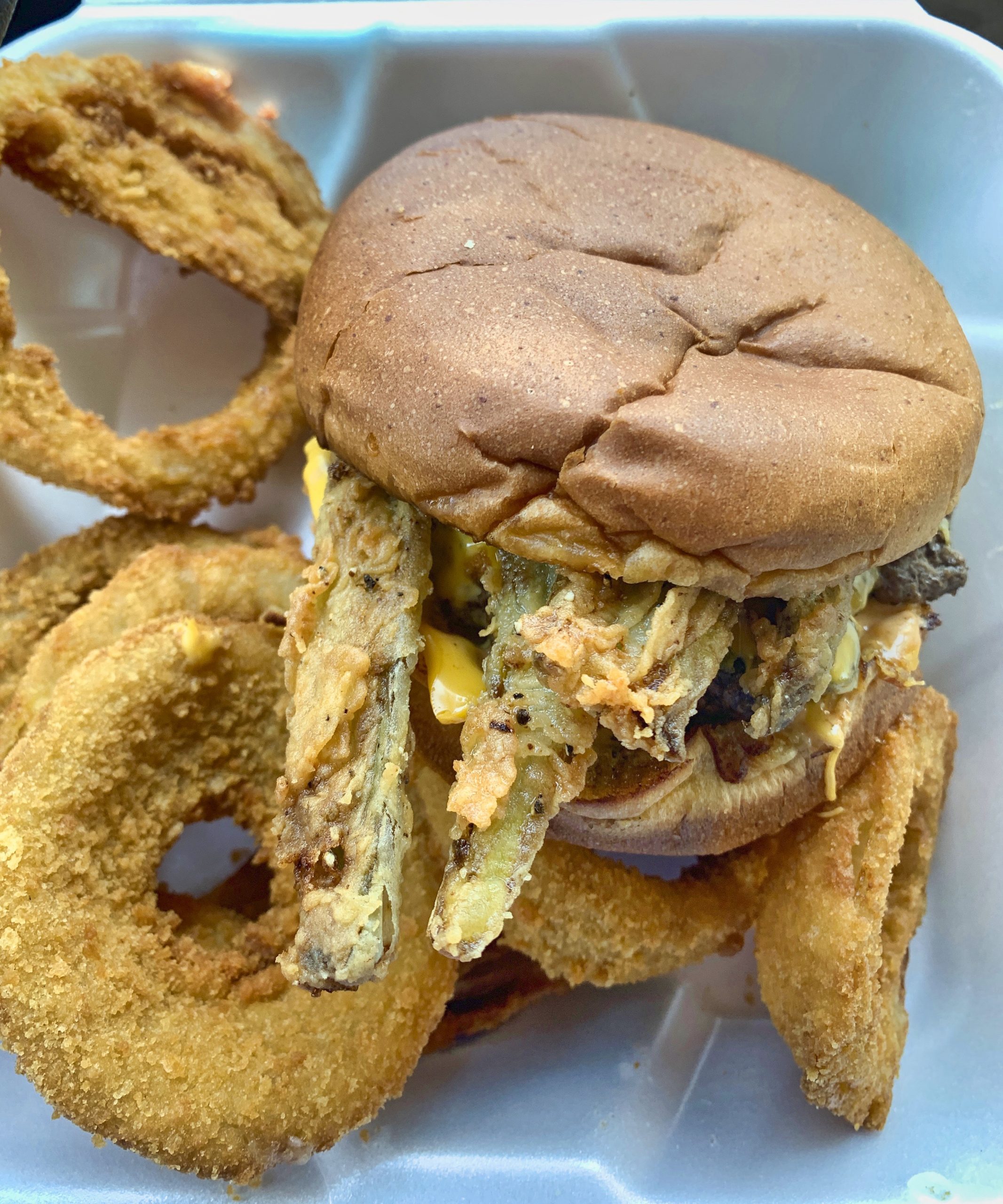 When we pulled up to the order window at the Oso Grill’s drive-through lane, Misty, our sweet server handed us a menu and contritely explained that the restaurant had run out of shrimp.  “Why,” I asked “would anyone visit the Oso Grill for shrimp when they can have one of the very best green chile cheeseburgers in the Land of Enchantment.”  With apologies to Smokey Bear, that green chile cheeseburger is the reason many of us drive to Capitan, New Mexico.  Since, however, most New Mexicans consider Smokey one of our state’s upstanding citizens, we can enjoy a fantastic burger at Oso Grill then cross the street to pay our respects to the living symbol of fire protection.  Smokey is buried in the Smokey Bear Historical Park about one-tenth of a mile from the Oso Grill.

The Oso Grill might have remained one of those secrets only denizens of the Lincoln county area know about.  Then came an invitation in 2017 from the New Mexico State Fair soliciting “ten established (brick and mortar) restaurants” to participate its annual New Mexico Green Chile Cheeseburger Challenge which “pits restaurant against restaurant to vie for the prestigious title of “green chile cheeseburger champion.”  This annual competition showcases New Mexico agribusiness, in particular green chile grown and beef raised within the Land of Enchantment (as if great green chile could possibly be grown anywhere else).

Small town restaurants have competed in the Green Chile Cheeseburger Challenge from the onset of the event.  Some–such as Sparky’s Burgers, BBQ & Espresso from Hatch and Laguna Burger from Laguna Pueblo–have even won the heated event, in both cases besting big city burger purveyors.  Other small town restaurants such as The Bisti Grille in Thoreau have earned the “People’s Choice” award. Obviously, when it comes to New Mexico’s sacrosanct green chile cheeseburger, it’s not the size of a restaurant’s hometown that counts, but the green chile-infused flavors that restaurant’s burgers bring.

For Oso Grill owner Brian Cleckler, the Green Chile Cheeseburger Challenge was an opportunity to give his burger exposure beyond the confines of the historic village in which he plies his formidable cooking skills.  In 2017, the little fish in the big pond earned the “People’s Choice” award while Sparky’s, another small town restaurant, claimed the title of New Mexico’s best green chile cheeseburger.   It was an auspicious start for the Oso Grill, one which had some of us wondering if “Oso” was a misnomer and that the restaurant’s true name should be “Oh So” as in “oh, so good.”

Two years later, the Oso Grill became the first three-time winner of the People’s Choice award and second two-time winner (Fuddrucker’s was the first ) of the Green Chile Cheeseburger Challenge.  The Oso Grill, in fact, is the only restaurant to win both awards in the same year, much less having done it twice.  The secret, owner Brian Cleckler told the Albuquerque Journal, is making burgers the way they make them every day at the restaurant.  Imagine that–a competition award-winning burger you can have every day of the week.

The State Fair Burger is a sum of great components which work very well together.  The burger construction process begins 24-hours in advance with the formation of 80% lean ground chuck patties.   That day-long process allows the seasoning (like a steak, not a burger) to settle into the beef which is cooked on a flat top grill so it can cook in its own juices.  The beef patty is topped with two slices of American cheese, a housemade chipotle dressing and Hatch green chile, but that’s not all.  All other ingredients are crowned with deep-fried and battered green chile strips, a delightful textural contrast.  The order in which ingredients are placed in the burger ensures juices flow into the beef without getting the bun soggy.  You won’t find lettuce, tomatoes or onions on this award-winning behemoth.  You won’t miss them.

One glance at the menu and you’ll quickly discern the Oso Grill is a special restaurant offering a menu with big city sophistication and as you’ll find, service with a small town homeyness.  That’s a winning combination.  Appetizers include such unique finds as jalapeño bacon wrapped shrimp, queso blanco and a very special egg roll you’ll meet later.  There are eight burgers in addition to the State Fair Burger.  Main courses feature steak, brisket, grilled chicken and a number of other hearty protein dishes.  There’s something for everyone to enjoy even if you pass on the State Fair Burger.

One of the Oso Grill’s more unique offerings is the Oso Egg Roll (stuffed with brisket, green chile and cheese served with a housemade sauce).  Perhaps the first thing you’ll learn about these egg rolls is that they’re made with a green chile that bites back.  Even the sweet dipping sauce won’t quell the oh-so-good burn.  The second thing you’ll discover is that smoked brisket is a superb stuffing for an egg roll.   These golden, cigar-shaped treats are surprisingly good.

My Kim, perhaps the only New Mexican who can travel 200 miles and not have a championship caliber green chile cheeseburger, opted for the green chile chicken enchilada casserole (a dish my sister Dolores makes better than any restaurant).  As on the egg rolls, the green chile is assertive in its piquancy.  It’s the dominant flavor in a dish which blends several ingredients such as cheese, onions, corn tortillas and sour cream.  The casserole is accompanied by chips and salsa, a small salad and a cup of pinto beans.  It’s a veritable feast.

As the reigning, defending green chile cheeseburger champion, the Oso Grill is a New Mexican treasure in one of the most beautiful towns in the Land of Enchantment.  It is truly oh-so-good.