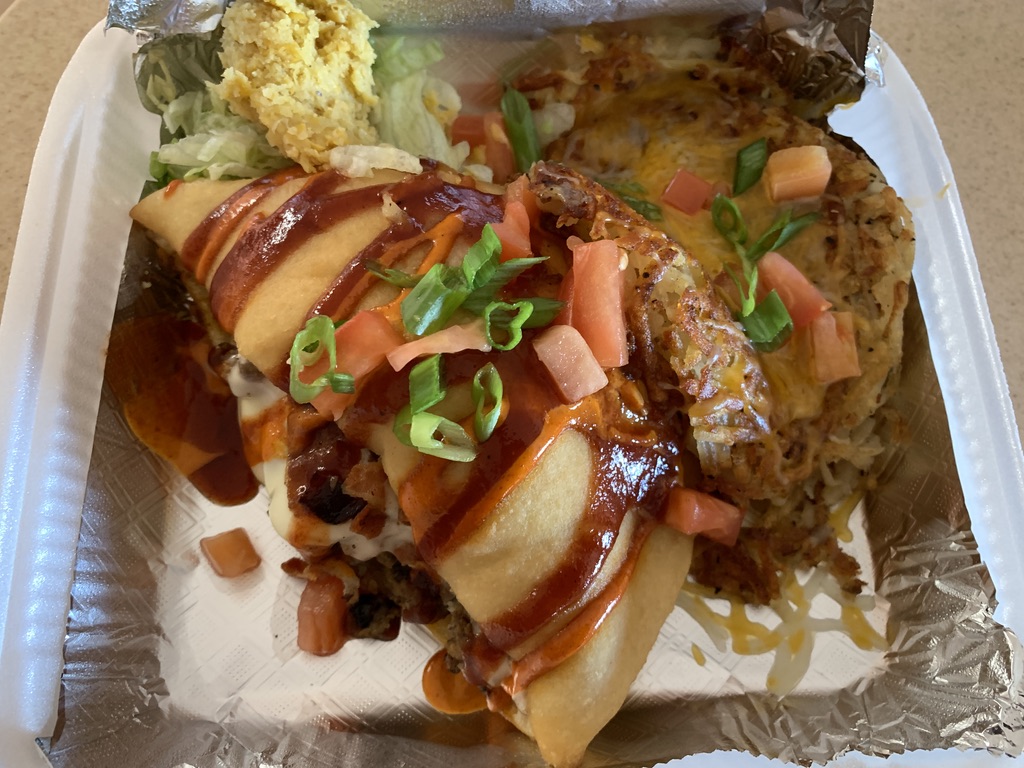 “Of the seven deadly sins, lust is definitely the pick of the litter.”
~Tom Robbins, Skinny Legs and All

“Why,” my Kim wondered aloud “would a food truck call itself Sopaipilla Lust.” Obviously reflecting on one of Father Simeon’s fiery sermons on the seven deadly sins, my naive bride was serious.  It got me thinking…also out loud.  “Sopaipilla Gluttony would conjure images of buffet-goers gorging themselves from a trough.  Sopaipilla Greed calls to mind diners hoarding more sopaipillas than they could possibly eat.  You can’t call it Sopaipilla Anger because, well, who could possibly be angry when eating sopaipillas.  Sopaipilla Sloth?  Nah, no one would be too lazy to work for their daily bread…er, sopaipilla.“

“Sopaipilla Envy?  Well, maybe that would work.  Many a time have I envied diners at another table for whom a stuffed sopaipilla plate was being delivered.  Sopaipilla Pride?  That might work, too.  A food truck or restaurant excelling in the preparation of outstanding sopaipillas would have reason to be proud of their culinary fare.  Lust, of course, is the carnal craving for the pleasures of the flesh and few things are as pleasurable as eating stuffed sopaipillas.  As you can see, “Sopaipilla Lust” makes the most sense.”    As always, my long-suffering Kim got more than she bargained for.

Lust, a theological scholar might argue, goes beyond just badly wanting something. Lust is more primal, more intense, more all-consuming. It’s an obsession, an animal longing and (fittingly) a hunger.  At what point then does mere coveting become carnal lust? For us, it was knowing that in order to sate our craving for stuffed sopaipillas from Sopaipilla Lust, we’d have to drive halfway through Corrales, the picturesque village that’s home to the slowest drivers in New Mexico. Sure enough, the vehicle in front of us was a farm tractor, the driver of which was visibly frustrated because he couldn’t get around the car in front of him going 15mph on a 25mph zone.

Sopaipilla lust is prominent in Taos county where I grew up.  During the nearly three decades in which legendary food columnist Fayne Lutz published recipes in The Taos News, the recipe most in demand was–by far–for the Northern New Mexican staple, the sopaipilla.  Denizens of Taos county lustily devour these deep-fried pillows which we used to sop up our chile, frijoles, chicos and posole like the fluffy, crusty bread scoops they are.  We didn’t always have the patience to stuff our sopaipillas like the restaurants did.  That takes time and when you’re hungry, who wants to wait.

Growing up in Chilili, Julia Cox learned to cook New Mexican cuisine at the apron strings of her grandmothers, both of whom were scratch cooks who never wrote down their recipes.  Julia herself experimented with “a little of this and a little of that” before coming up with a sopaipilla dough recipe that won over her own family.  Her sopaipillas were a huge hit with the carry out and kitchen operations she ran before retiring.  Her children decided Julia’s sopaipillas should be shared with the world.  In October, 2018, they launched Stuffed Lust, their goal to present diners with delicious chef-inspired recipes all stuffed into their mom’s amazing sopaipillas.  We first encountered Stuffed Lust at the Ex Novo Brewing Company in Corrales.

Your first utterance at perusing the Stuffed Lust menu will probably be something like “these aren’t my mom’s stuffed sopaipillas.”   Beyond beans, chile and meat, most of New Mexico’s abuelitas didn’t stuff sopaipillas with anything but love.  Stuffed Lust’s avant-garde approach to stuffed sopaipillas brings them into the 21st Century.  Traditionalists might scratch their heads, maybe even take offense, but it’ll take only a couple of bites to win them over.  Aside from the unorthodox mishmash of ingredient combinations with which the sopaipillas are stuffed, some are christened with names more apropos for an Italian restaurant: Gambino and Original Gangster, for example.  Others are named for New Mexico landmarks and places: Chimayo, Cabezon, Taos (tostadas) and yes, Heisenberg. Not all of them are graced with chile.

It tastes like edible art, too, a melange of delicious ingredients that work very well together.  Made on the premises and plated (albeit on Styrofoam boxes) piping hot, the sopaipilla is a perfect canvas for one of the most unique stuffed sopaipillas imaginable.  The green chile meatloaf is moist and though the green chile is only mild at best, it’s got a nice roasted flavor that  shines through.  The Hatch red chile BBQ sauce and red chile aioli aren’t especially piquant either, but boy are they good.  Crispy hash browns make a surprisingly good complement to the stuffed sopaipilla as does a small (maybe a tablespoon) portion of sweet corn pudding (one of my guilty pleasures).

My Kim’s choice could only be described as slightly more traditional than mine though it could be argued that the name Heisenberg has done as much recently for New Mexico tourism as some of our historical and topographical landmarks.  It could also be argued that  the Heisenberg (sopaipilla stuffed with thin sliced sirloin, house seasoned mushrooms, peppers and onions, tortilla strips and house made cheese sauce all topped with  red and green chile aioli served with beans and rice) is addictive as some of the cocktails a certain chemistry teacher concocted in a beige 1986 Fleetwood Bounder recreation vehicle and motor home.

As diverse and delicious as stuffed sopaipillas have proven to be, as vehicles for desserts they’re vastly underutilized.  Not so at Stuffed Lust where postprandial sopaipillas extend beyond the traditional sopaipilla served with honey.  Stuffed Lust has one of those, too, calling it the Han Solo and dusting it with powdered sugar.  Since your main course will probably be non-traditional, you my as well enjoy a non-traditional dessert sopaipilla.  Make it Peaches And Cream (sopaipilla stuffed with slow-cooked natural peaches and a blend of spices layered with vanilla whipped cream topped with house made caramel then dusted with angel’s dust).  Reminiscent of peach pie, this is a sopaipilla self-actualized, a dessert you’ll love.

Even better, if that’s possible, is La Bonita (a sopaipilla stuffed with fresh strawberries, blueberries and whipped cream, drizzled with berry coulis topped with lavender cookie crumble), a soiree of sweet and tart flavors that truly earns its name.  Each component in a collage of concordant ingredients would be thoroughly enjoyable on its own, especially the lavender cookie crumble and whipped cream.  The fresh strawberries and blueberries provided just enough tartness to serve as a foil to the sweet ingredients.  Then there was the sopaipilla, a magnificent exemplar of what our state legislature should designate New Mexico’s official state bread.

A Hainesville, Illinois Yelper wrote “I follow Stuffed Lust on Facebook and Instagram and every single time a picture of their stuffed sopapillas show up in my feed my mouth waters and I wish I could have one!”  That’s lust!  You might find yourself with a similar case of lust when you experience these unique and uniquely delicious stuffed sopaipillas.