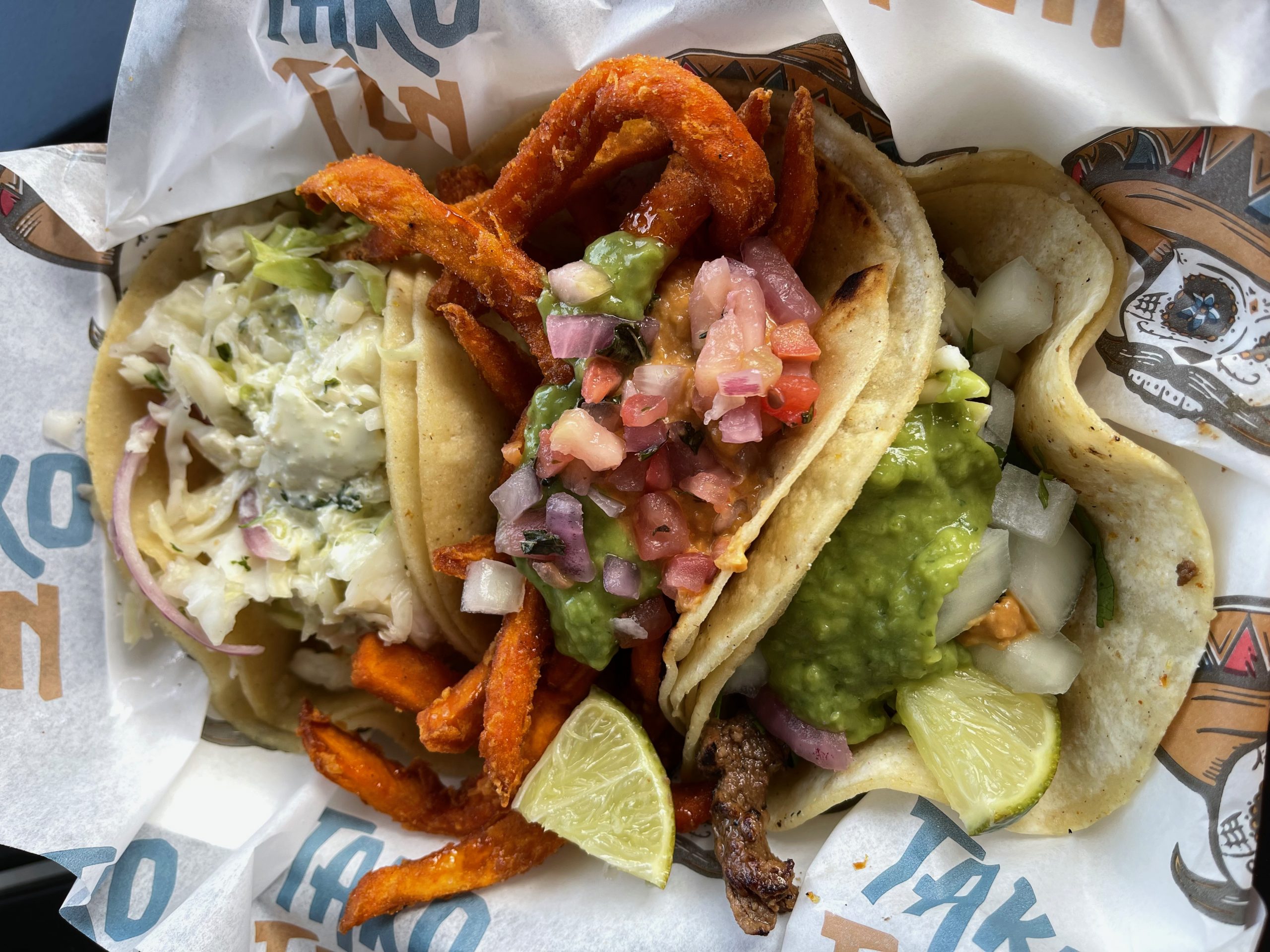 Gustavo Arellano, author of Taco USA: How Mexican Food Conquered America, wasn’t kidding when he quipped “The Taco Bell taco is dead. Long live the taco.”  Boomers like me may not have grown up heading for the border, but we did grow up with the Taco Bell “taco template”–a crunchy hard-shell tortilla crammed with seasoned ground beef, chopped tomato, lettuce, a fistful of shredded yellow cheese and a large dollop of sour cream.  We’ve long since joined enlightened millennials and generation Z diners in railing against what Chef Rick Bayless calls Taco Bell’s “near-laughable caricature” of authentic Mexican tacos.

So just what are authentic Mexican tacos? Travel throughout the Land of Montezuma and whether you get your tacos from upscale restaurants, market stalls or street vendors, you’ll quickly discover their versatility, diversity and deliciousness.  Adventurous diners can, for example, enjoy palm-sized tortillas filled with virtually every part of the pig, cow, or chicken.  These proteins can be stewed (as in a guisado), barbecued (for barbacoa), roasted on a vertical spit (al pastor), cooked atop a griddle (a la plancha), or served campechano (a mélange of chopped meats). Tacos de mariscos (seafood), pescado (fish) and chapulines (grasshoppers) are also pretty popular fare.  Notice that they’re never made with ground beef (take that Taco Bell).

As with all time-honored and traditional cuisine, the taco is evolving both in Mexico and the United States–and not just in the form of Taco Bell’s abhorrent breakfast waffle taco. Contemporary diners want—and expect—more mash-ups combining multiple ethnic influences, a blurring of lines between ethnic menus (exemplified by the Korean taco and Hawaiian taco from Albuquerque’s Street Food Sensations).  We appreciate when chefs think out-of-the-box and surprise us with their creativity.

Not everyone is embracing the evolution of the taco.  Diana Kennedy, the doyenne of Mexican cuisine and recipient of the Mexican government’s Order of the Aztec Eagle award, contends  young chefs are “throwing things together that don’t really go together.”   Traditionalists who agree with that viewpoint may remain content to enjoy the very precise and limited parameters of tradition.  That leaves more tacos for the rest of us.

When it comes to creativity and actualizing tacos (making them all they can be), Chef Dom Valenzuela may be without peer.  An Albuquerque native and graduate of the prestigious Johnson & Wales University (class of 2004), Chef Valenzuela returned to Albuquerque in 2019 after stints (mostly as a sushi chef) in Hawaii and California.  He launched Dia Del Los Takos inside Albuquerque Indoor Karting, “one of Albuquerque’s funnest adrenaline destinations” and quickly earned accolades from readers of Albuquerque the Magazine. In its annual “Hot Plate Awards” edition for 2019, the magazine’s readers bestowed a well-deserved “Hot Plate” award to Dia De Los Takos for “the entire taco menu.“

Within a year Dia De Los Takos left the confy confines of Albuquerque Indoor Karting and began operating as a food truck (that’s mobile kitchen to you, Bob).  In January, 2020, Dia De Los Takos was named one of Yelp’s Top 100 Places to Eat, the only restaurant in the state to be so honored.   Not long thereafter Business Insider teamed up with Yelp to determine the best takeout spot in every state and Dia De Los Takos earned that designation for the Land of Enchantment, ranking 56th.

Despite pandemic woes, Chef Valenzuela was soon on the move again, launching Tako Ten on 17 August 2020 in the Bridges On Tramway retail complex.  The paint on the walls wasn’t even dry when with the help of Yelp, Eat This, Not That! compiled a list of “the most mouth-watering tacos in every state.”  Tako Ten took those honors, too.  As of this writing, Tako Ten has a 4.5 star rating (out of 5) on Yelp.  It also earned three stars from the hard-grading Albuquerque Journal restaurant critic.

From the outside Tako Ten would look like just about every other retail center restaurant were it not for signage which features a mustachioed sombero-sporting calavera, an anthropomorphic representation of a human skull.  Mexican tradition holds that skeletal figures return to this world for El Dia De Los Muertos, the Day of the Dead.  During this holiday, the profusion of skeletons of all sizes performing day-to-day activities signifies the return to this world of the dead who remain who they were when they lived, doing what they did.  Their post-mortem activities are depicted on the wall leading to the counter where you place your order.    The artwork at Tako Ten is typical of the fun and folly which emanates at every turn at this popular taqueria.

Even more fun than the artwork is the menu, a drool-inspiring menagerie of deliciousness.  First on the line-up are seven burgers and a chicken sandwich.  The canvas for each burger and sandwich is a toasted bun dressed with green leaf lettuce, special sauce, tomato and red onion served with French fries.  Naturally, green chile is available for each.  Half- and full-sized Frida pies, the restaurant’s fabulous nachos are also available as are Granny’s chips and dip served with avocado queso and your choice of dip.  No visit to Tako Ten is complete without enjoying the menu item named on the marquee.  That would be takos.  There are ten of them, hence the restaurant’s name.

30 January 2021: Since you’ll undoubtedly be hard-pressed to decide which three or seven to enjoy, why not just order all ten.  Tako Ten calls this order option the “Circle of Friends,” ten glorious tacos splayed across the bottom of a pizza box in campfire circle fashion encircling red, yellow and blue chips.  Eight colorful salsas are provided in a separate box.  The tako line-up includes such traditional Mexican takos as al pastor, carne asada and carnitas.  With a vegan sweet potato tako and a battered avocado tako on the menu, vegetarians need not feel excluded.  The only surprise (at least to me) was a ground beef tako thankfully not made with the Taco Bell taco template.

30 January 2021: With my Kim out-of-town when The Dude and I visited Tako Ten, I nonetheless ordered the Circle of Friends, foolishly believing I would eat five takos over the course of two meals.  Alas, after three takos I had to wave the white flag. To the detriment of takos saved for later meals (they don’t taste as great reheated as they do on-the-spot), it took me three meals to finish all ten.  That’s not an indictment of my manliness, but an illustration of how generously packed each two tortilla takos is.  Surprisingly my favorite of ten terrific takos was the vegan sweet potato tako (crisp sweet potato glazed with spiced honey and topped with honey, the creamy house chipotle hummus and a refreshing Jerusalem salad).  The contrast of sweet and savory flavors blew me away.

30 January 2021: From among the eight salsas, my favorite was the Fresno beet salsa, the deep red-purple color a portend to some serious heat.  Even the yellow mango salsa has a respectable level of piquancy as does the Peruvian ahi amarillo.  Take this from a bona fide fire-eater, these salsas are all incendiary.  Don’t let the innocuous colors fool you.

24 September 2021: If  the canned gooey glop ballparks and movie theaters call “nacho cheese” has left you so traumatized or nauseated that you’ve sworn off chips and queso, Tako Ten’s fabulous chips and Oaxaca queso will bring you back into the fold.  This is the queso all turophiles have been searching for.  It’s creamy, thick and studded with flame-roasted Hatch green chile.  Best of all, the richness of artisan Oaxaca queso with a dusting of queso ground to a powdery consistency is excellent.  The chips are low in salt and formidable enough for scooping.

24 September 2021: Birria, a Mexican dish from the state of Jalisco is a spicy stew traditionally made from goat meat or mutton, but occasionally from beef or chicken. Leave it to Chef Valenzuela to offer something deliciously different: birria made with pork. What isn’t different about this birria is just how delicious it it. The pork birria is available in the form of birria ramen, a sixteen-ounce bowl of birria consommé and birria takos (four juicy pork birría takos topped with onion and cilantro, served with a spicy and smokey consommé , and limes).  The consommé has a nice blend of aromatics and piquancy.  It makes a wonderful dip for the tender tendrils of pork in memorable takos.

Ten may be the number of takos on the menu, but on a scale of one to ten, it signifies exceptionally high quality–even perfection.  That’s what some of Chef Valenzuela’s takos are–perfect.