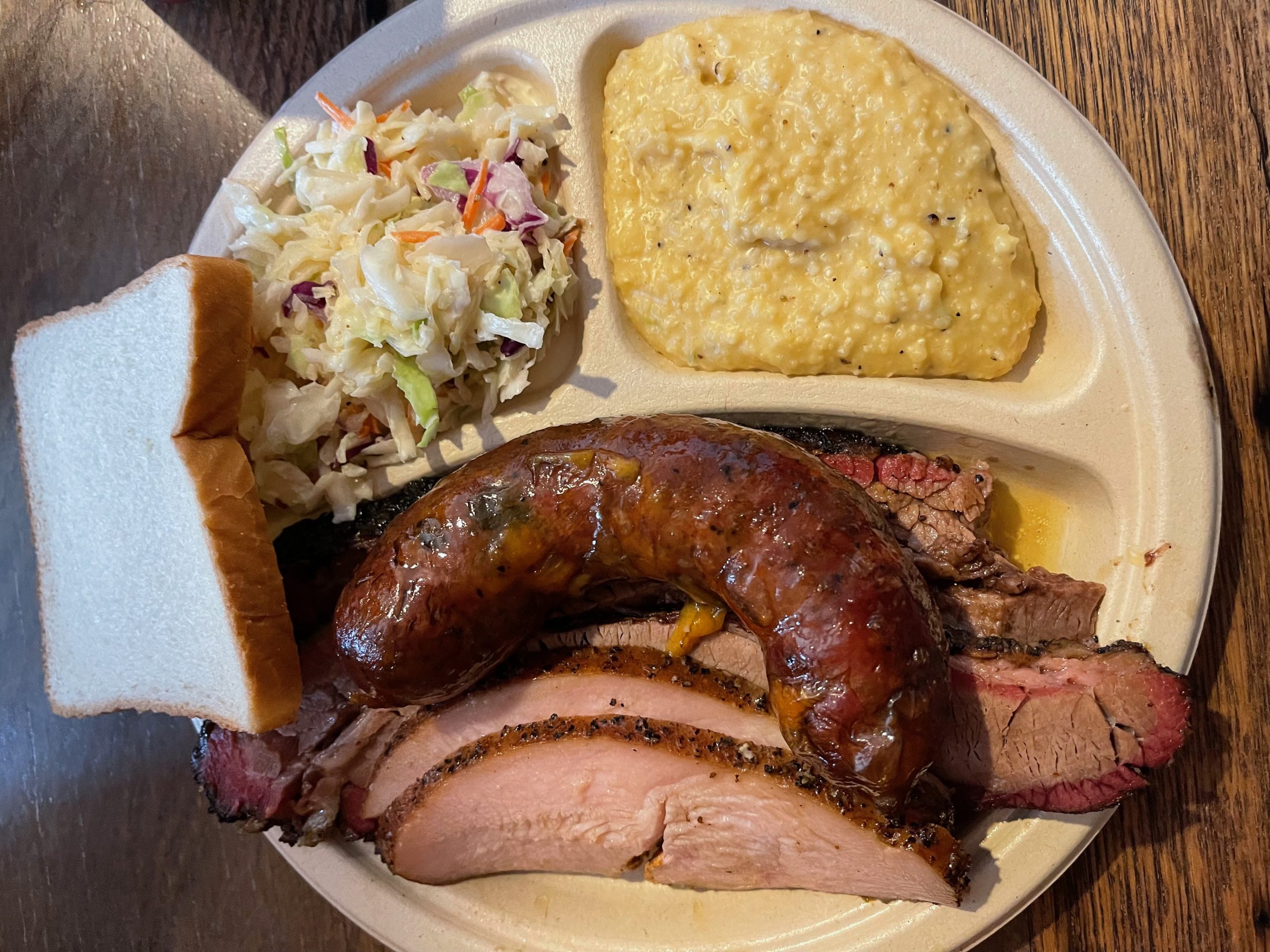 If you grew up in New Mexico, you’ve likely heard some variation of that tired old epigram “The reason New Mexico is so windy is because it’s bordered by Arizona which sucks and Texas which blows.”   If any truth whatsoever can be ascribed to that witticism, New Mexico should have fabulous barbecue because it’s bordered by Arizona which has great barbecue and Texas which has the best barbecue in the universe.  Alas, virtually every barbecue aficionado I know agrees that the Land of Enchantment’s barbecue has a lot to be desired.  It’s “good” most will agree, “better than it used to be,” others will tell you.  Still many of them will tell you the only barbecue restaurant in New Mexico worth a lengthy  pilgrimage is Mad Jack’s Mountaintop Barbecue which has its genesis in Lockhart, Texas, the barbecue capital of the world.  For better than good barbecue, savvy barbecue fanatics make a run for the border–either to Arizona or to Texas.

Mastering the precise science and culinary art of the low-and-slow process of smoking of meats is not for the faint of heart or for couch potatoes like me.  It requires the patience of Job, the persistence of Hercules and the wisdom of Solomon.  Being a pitmaster in Phoenix during a sultry, sweaty summer day is even tougher.  It’s akin to toiling arduously in the fires of partition.  When the thermometer tops a hundred-degrees in the Valley of the Sun, you can fry an egg on any paved street (though it’s likely a good slab of brisket would incinerate on that same paved street).  Pitmasters in Phoenix are a hardy breed to ply their craft in veritable steam baths.  It’s a reflection of their pride in what they do that they do it so well.

Despite the annual furnace that cranks up in April and doesn’t back down until at least October there are several tremendous barbecue establishments in the Valley of the Suns.  To visit them, barbecue buffs willingly risk third-degree burns just opening their car doors then endure minutes of sauna-like heat until the AC cools the car interior.  They would risk the twelve labors of Hercules to queue up at paragons of ‘cue such as those BBQ Revolution believes are the ten best BBQ restaurants in Phoenix.  One commonality between similar lists is the selection of Little Miss BBQ as the very best not only in Phoenix, but in Arizona.  For the past several years, in fact, it’s been consensus among most online and print local and national media that Little Miss BBQ is nonpareil for smoked meats.

Whereas James “Mad Jack” Jackson was born and raised in Lockhart, Texas, the official (House Resolution #1024) barbecue capital of Texas, Little Miss BBQ owner Scott Holmes is from Tempe and has no Southern roots to fall back on.  Unlike many pitmasters, Scott has a culinary degree.  Like many pitmasters and barbecue lovers, it took a visit to Central Texas for him to achieve an epiphany and establish a future direction for his life. That epiphany came courtesy of barbecue at The Salt Lick in Driftwood, Texas, in 2006.  Instead of pursuing dreams of launching a restaurant reflective of his culinary training, he and wife Bekka would work toward mastering barbecue on the competition circuit so they could launch a barbecue restaurant.

Scott and Bekka engaged in Kansas City Barbecue Society (KCBS) competitions for four and a half years–winning multiple grand championships and other awards–before launching Little Miss BBQ in 2014.  The curious appellation, Little Miss BBQ, was suggested by Bekka  in honor of Yager, the family dog’s nickname.  Little Miss BBQ was the name of their successful competition barbecue team and the name they carried forward when launching their brick-and-mortar operation.  Competition honed their skills and taught them the nuances of manipulating smoke to optimize flavors.  As you’ll see while progressing slowly down the line, all 1000-gallon propane tank smokers carry the Camelback brand and are made in Phoenix in partnership between Scott and his friend John Rippel.  Their smokers are endowed with features they believe are critical to even cooking, easy cooking and great looks.  It’s also critical to outstanding barbecue.

Two Phoenix locations–one off 17th Street and one on University just west of Tempe–are fairly centrally located for much of the metropolitan area.  There’s absolutely no glitz or glamour prefacing your arrival to the University location, just a fairly nondescript sign you’ll miss if you’re not paying attention.   With only 30 or so parking slots, a traffic attendant will direct you to an open space–if there are any.  We parked next door.  It’s almost intimidating to see the number of people queuing up for ‘cue.  Social distancing isn’t well practiced as the first-timers among us want to find out what we should order and the habitues are happy to regale us with mouth-watering accounts of their favorite smoked foods.  It makes the time go by more quickly.  The nearly two hours we spent in line seemed like only an hour and a half.

One of the most challenging aspects of standing in a long line isn’t the twenty feet or so that aren’t shaded, but the ambrosial aromas that engulf you even before you take your place at the back of the line.  As you draw slowly, ever slowly, closer to the source of those intoxicating balms, your hunger increases exponentially.  Eventually you’ll be close enough that you’ll be able to watch the punctilious pitmasters perform their well-practiced routines.  Pitmasters are the earthly embodiment of Vulcan, the Roman god of fire.  One of their most impressive empyrean powers is the willpower not to eat continuously as they meticulously attend to Arizona’s best barbecue.

When we finally arrived at counter where we could place our order, we could relate to Moses and the wandering Jews who spent forty years in the desert (in the days before GPS) trying to find the Promised Land.  Instead of manna, the brawny counterman manning the cutting block dispensed morsels of brisket before preparing our order.  It was a delicious preview of the preternaturally delicious bounty awaiting us.  Sadly by the time we got to order Little Miss BBQ had run out of pastrami, the daily special on Thursdays.  Almost as tragic, the University location doesn’t offer the green chile burritos which cognoscenti consider some of the best in the city.

Because it may be a while before we pass this way again, my Kim and I both ordered the two meat platters.  Two can easily become three because the enterprising counterman will ask if you’d like a link of Cheddar jalapeño sausage on the side (who can resist?).  My two meats were smoked turkey and brisket.  Fatty brisket, by the way, is the most requested meat on the menu.  Ask for both fatty and lean brisket to experience the best of both and you’ll see why fat is where it’s at.  At Little Miss BBQ as in Texas, brisket is king.  It’s silky and unctuous, coaxed to an unbelievable tenderness and redolent with mostly two kinds of oak, Arizona pecan, or pistachio wood.  The brisket is adorned with a prominent smoke ring nestled neatly under a crunchy bark, a badge of honor and symbol of excellence.  Three sauces–a sweet tangy house sauce, a spicy sauce and a mustard sauce–are available on each table, but with truly outstanding brisket, it’s not absolutely necessary.  This is outstanding brisket, truly Texas quality!

While brisket has an assertive flavor profile, the best smoked turkey should have a more mild flavor.  Wood smoke envelops the turkey as it cooks, but it’s the barbecue gods managing the smoke that ensure the meat is imbued with a light smoky flavor so reminiscent of Thanksgiving season.  You’ll be thankful for the smoked turkey, the very best we’ve had.  The Cheddar jalapeño sausage has a lot of personality–like Cybil only you’ll like every personality.  Sharp, molten Cheddar is a nice counterbalance to the only slightly piquant jalapeño.   Two meat platters come with two sides.  My choices were coleslaw and jalapeño cheese grits.  The coleslaw is sweet and creamy, but not slathered with so much dressing that it runs down your arm.  The jalapeño cheese grits were only so-so.  Apparently the pitmasters are human after all.

My Kim prefers porcine perfection to bodacious brisket, opting for her two favorite smoked meats: pulled pork and pork ribs. With extended smoking at low temperatures, Little Miss BBQ’s pork is pulled into tender tendrils of melt-in-your-mouth deliciousness.  Pulled pork may be more closely associated with the South, but great pitmasters everywhere should do a credible job smoking it.  Little Miss BBQ’s pulled pork is terrific.  Both the pulled pork and the pork ribs have a generous amount of bark, the “meat-candy-like,” crusty rind suffused with incredibly complex notes.  Rather than bore you with a scientific explanation that bark is a byproduct of complex chemical reactions (including the Maillard reaction and polymerization), let me just tell you this bark is addictive.  So, too, is the pork underneath the bark.

Little Miss BBQ is truly Central Texas barbecue a couple of states too far west of the Lone Star state.  Along with Mad Jack’s Mountaintop Barbecue, it’s the best barbecue we’ve had outside of Texas.