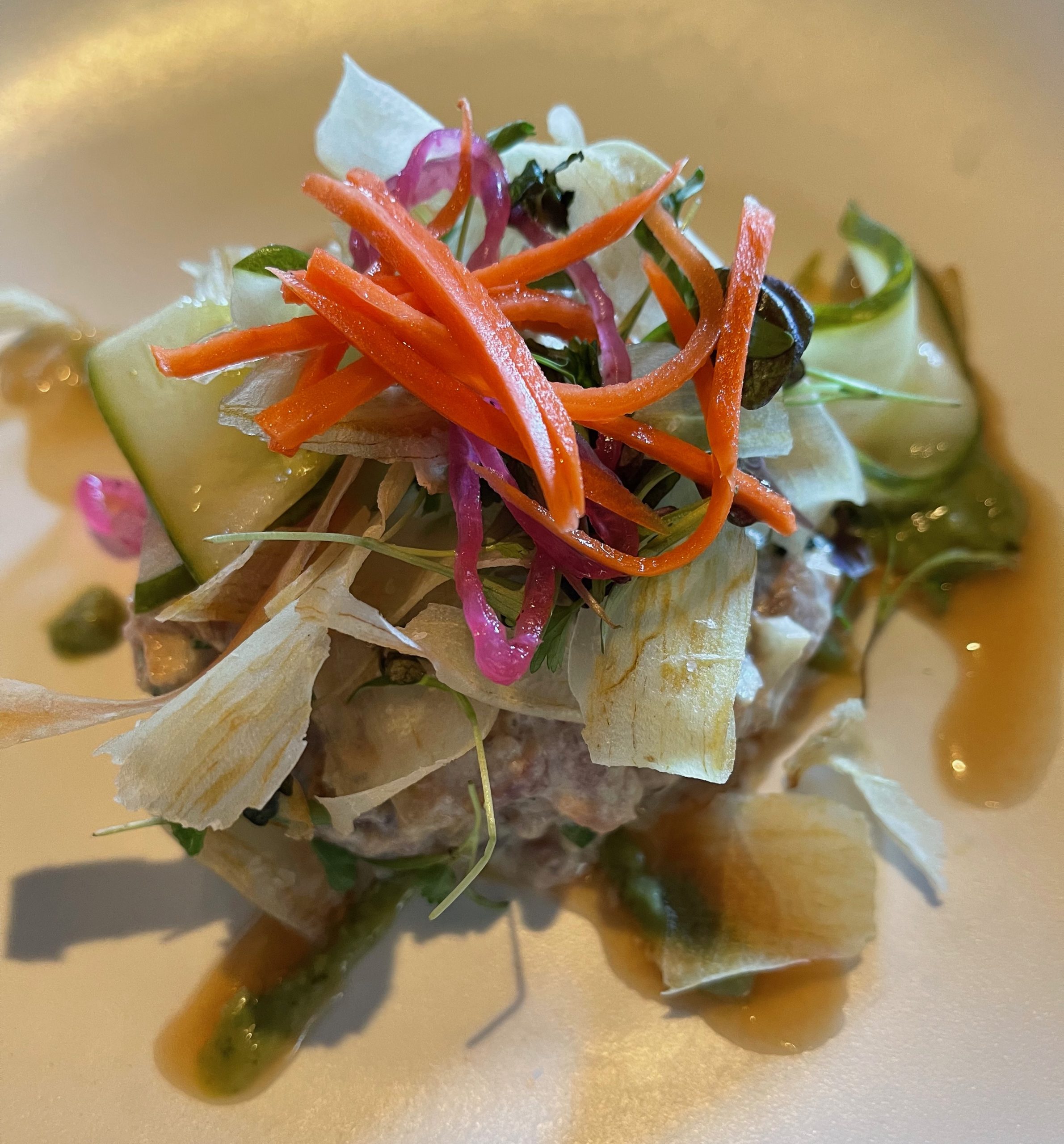 Did you know the Land of Enchantment has an official state lizard?  Chastity Bustos does.  In fact, in she named her new eatery  in honor of that lizard, the New Mexico whiptail (Aspidoscelis neomexicanus).  When I asked Chastity if she knew the New Mexico whiptail is a female-only species that doesn’t need male lizards to reproduce, she jokingly replied “it’s all about girl power.”

Don’t get the impression that Chastity subscribes to the slogan popularized by feminist icon Gloria Steinem: “A woman needs a man like a fish needs a bicycle.”  Chastity and her husband Brian have an egalitarian business relationship.  She manages day-to-day operations for Whiptail and he does the same for their other restaurant, Philly Steaks on Albuquerque’s east side.

As soon as work began on the Highway 528 restaurant that for years had housed Banana Leaf, City of Vision residents became giddy with excitement.  It’s not everyday a new restaurant opens up in Rio Rancho.  Social media postings, particularly on Nextdoor swelled excitement and divulged revelations. “Visionaries” not only learned the new eatery would be helmed by a Rio Rancho resident, but that it would feature a concept theretofore new to New Mexico’s third largest city.

Over time more was revealed, including that intriguing name.  Whiptail, it was discovered would showcase fine wines and small plate dishes (tapas), a concept that’s met with mixed success in Albuquerque but which has never before been attempted in Rio Rancho.  While the City of Vision has jumped on the craft beer bandwagon, Whiptail is the city’s first eatery focusing on wines–pairing them with different foods and even teaching diners about varietals.

Whiptail’s make-over left virtually no vestige of previous occupants.  The spacious dining room is bright and airy, highlighted by a colorful metallic whiptail lizard crawling just above the small bar.  A back patio invites lengthy, intimate stays with a fire pit and woven rattan seating ideal no matter what the weather.  Chastity has been a peripatetic presence during both our visits.  She’s got an ambassadorial flair for her new restaurant with an encyclopedic knowledge of the menu and the concept she’s building.

Chastity plans to mix things up, to keep the menu ever-evolving and ever-exciting.  New items will be introduced over time on a menu that will offer more than twenty food items.  In addition to “bites” (the tapas), the menu includes two salads, four “sandwhiches” and two desserts.  During our inaugural visits, we found both an “exclusive sneak peek menu” and a smaller menu of intriguing specials on our table.  As introductions to the bites concept goes, both menus are winners.

3 January 2022: The unnamed smaller menu listed only four items including a 16-ounce grilled rib eye, a charcuterie board, crushed whipped potatoes and tuna ceviche (diced ahi tuna, jicama, jalapeno, coconut soy vinaigrette, micro shisho).  Acid from a citrus marinade acts as a catalyst that both alters the texture of the ahi and “cooks” it.  This ceviche is light, fresh, herbaceous, and has a nice balance between citrusy and ever so slightly sweet (from the coconut soy).  The dried jicama “chips” provided a textural change of pace.

3 January 2022: Pimento cheese is ubiquitous throughout the South, but nowhere more than in South Carolina, the Pimento State where it’s respectfully and lovingly referred to as “Southern Paté” or the “Caviar of the South.” Author Reynolds Price, a North Carolina resident even dubbed it “the peanut butter of my childhood.” It’s one of the foods we’ve missed most since leaving Mississippi in 1995.  Only a handful of restaurants in New Mexico have offered it so when Whiptail’s menu listed Pimento Cheese (Chimayo red chile, red peppers, white Cheddar, cream cheese, toasted herb crostini), we jumped on it.

Peruse the ingredient list above and you’ll quickly note it doesn’t subscribe to any pimento cheese template from the South.  In the Carolinas, it’s usually made with Cheddar, South Carolina-made Duke’s mayonnaise and pimentos, a thicker-skinned version of the red bell pepper.  New Mexicans will argue that our sacrosanct chile improves everything in which it’s used.  We won’t argue that point.  The key is using it judiciously on foods such as pimento cheese.  Whiptail’s chef does so.  The results are a pimento cheese even Southerners wouldn’t kick off their tables.

3 January 2022: Bustle observes “There’s something about mac and cheese that makes it the best comfort food. Maybe it’s the warm temperature that it’s served at, maybe it’s the smooth, creamy noodles, or maybe it’s the idea of “liquid cheese.”  What makes it the best comfort food is all those things, but moreso it’s the fact that it’s just absolutely delicious.  Whiptail’s version of mac and cheese (Orecchiette pasta, Gruyere cheese, aged Parmesan cheese, Fontina cheese and Parmesan crumble) is so good you won’t want to share the small plate.  This is one tapa that can’t be topped, so good it should be served in full-sized portions.

3 January 2022: Political satirist P.J. O’Rourke believes “A fruit is a vegetable with looks and money. Plus, if you let fruit rot, it turns into wine, something brussel sprouts never do.”  If it sounds as if everyone maligns the humble brussel sprout, you’re probably not far from the truth.  Brussel sprouts consistently rank as one of the most hated vegetables in America.  Perhaps one of the reasons they’re so hated is because its detractors have never had really good brussel sprouts.   Whiptail’s fried brussel sprouts (crispy golden brussel sprouts, green apples, Balsamic vinaigrette, chives) would do the trick.

Many of us are so used to the idea that brussel sprouts taste bitter and stink up the house–both while they’re cooking and after they’ve been digested.   The truth is when cooked properly, these little green leafy balls are actually quite delightful with a sweet, nutty, smoky flavor that just might convert detractors.  Whiptail’s version is among the best we’ve had.  Tangy green apples and Balsamic vinaigrette don’t so much mask any inherent bitterness in brussel sprouts as they do counterbalance them with sweet and tart flavors that complement the hated vegetable.

7 January 2022: When we saw crispy onions (crispy battered onions, garlic aioli, Aleppo chili flake) on the menu, we feared that meant those confounding matchstick-thin slices of breaded and deep-fried onions tangled into an unmanageable mess.  Thankfully Alexandra, our wonderful server, explained crispy onions are large onion rings and they’re absolutely delicious.  She steered us right again.   The light batter on the luscious sweet onions is impregnated with Aleppo chili flake, deeply red, mild in heat flakes that enliven the onion rings.  So does the garlic aioli.

7 January 2022: In tribute to Philly Steaks, the first Bustos family restaurant, Whiptail offers a Philly Steak on its sandwhich menu.  This Philly Steak can be prepared with your choice of protein: steak, chicken or impossible meat; your choice of cheese: white American, cheese Wiz or Provolone; and the toppings of your choice: grilled onions, bell pepper, mushrooms and green chili (SIC).  The Philly Steak is eight-inches long.

Aside from size, the biggest difference we experienced between Whiptail’s version of the sandwich and those crafted at Philly Steaks is the bread.  At Philly Steaks, the hoagie bread is reminiscent of Amoroso’s, the legendary Philadelphia hearth-baked bread.  It’s a pillowy soft repository for fresh, moist ingredients.  Whiptail’s sandwich is constructed on bread that isn’t quite as soft (either that or it may have been lightly toasted).  My Kim asked for steak, white American cheese and mushrooms.  No green chile or bell peppers (sacrilege, right?).  You don’t have to visit the City of Brotherly Love to find a Philly you’ll love.  There’s one at Whiptail.

7 January 2022: It’s oft been debated whether or not burgers are part of the sandwich family.  That’s a moot point, unworthy of debate in this space.  Instead, let’s talk about the Whiptail burger (eight-ounce Angus beef patty, white Cheddar, butter lettuce, heirloom tomato and Whiptail house dressing), a burger so good it doesn’t need green chile.  (It also doesn’t need the butter lettuce or heirloom tomato, both of which are generously portioned.)  At medium, the Angus beef is moist and juicy with molten cheese blanketing it.  Whiptail’s house dressing is the reason green chile is rendered superfluous.  It’s one of the very best burger dressings we’ve ever had, but its ingredients are so guarded I couldn’t successfully bribe, threaten or cajole Chastity enough to share its secrets other than its base ingredient is the restaurant’s garlic aioli.

Whiptail is an example of girl power in action–a passionate, customer-oriented owner with a dynamic vision for a restaurant Rio Rancho diners and beyond should consider one of the best in the city.