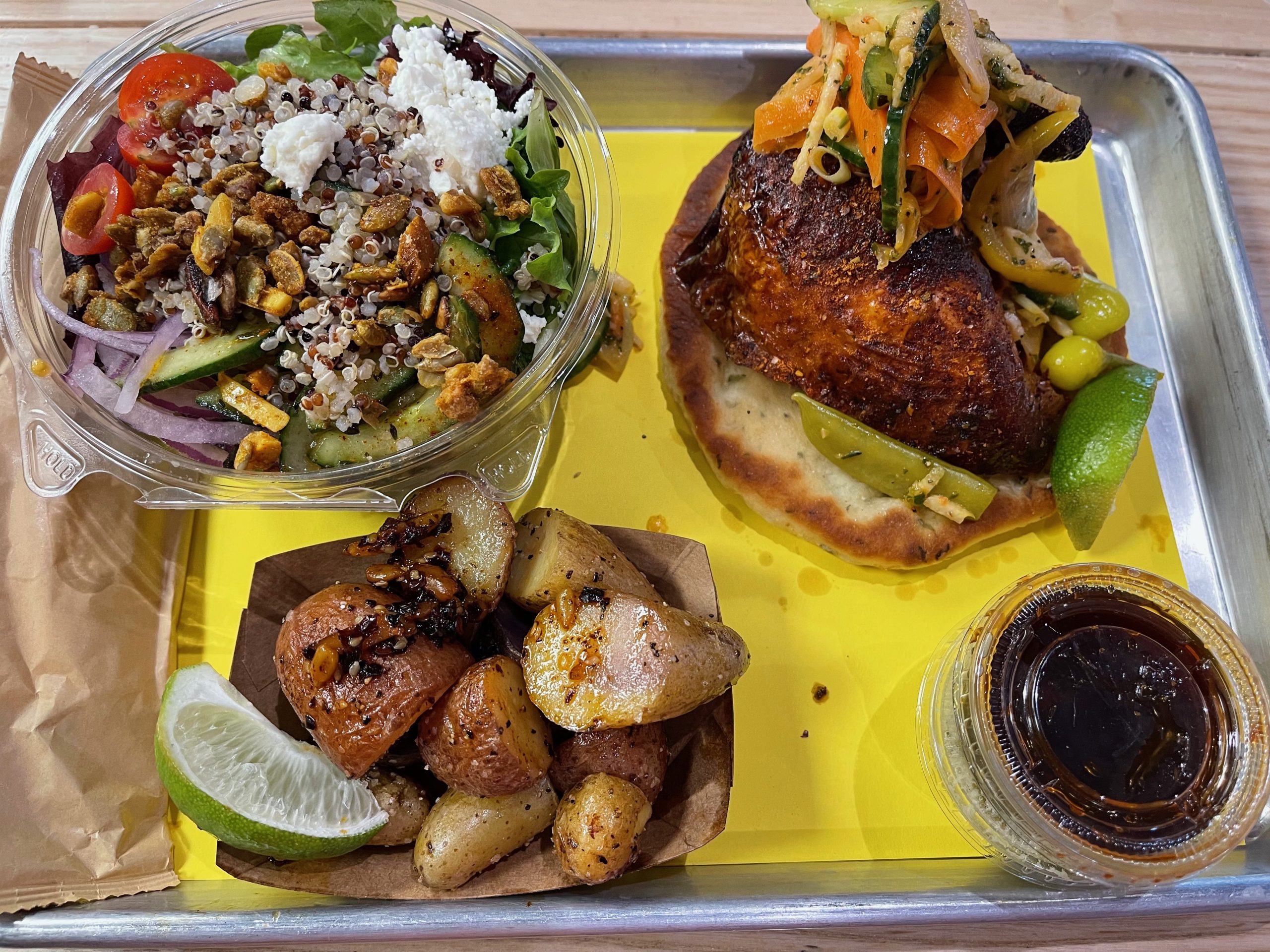 Google “the history of rotisserie chicken” and you’re likely to read something along the lines of “Back in 1985 a fast casual chain called Boston Market (formerly Boston Chicken) specialized in the sale of rotisserie chicken. People would pick up a pre-cooked bird along with several side dishes, and have a family dinner that felt homemade. The concept caught on quickly and 35 years later you can find these pre-cooked birds sold throughout the country in virtually every supermarket.”

While the last part of that statement–“you can find these pre-cooked birds sold throughout the country in virtually every supermarket“–may be true, one megalithic retailer may be responsible for their continued growth in popularity.  According to Reader’s Digest, “Costo sold approximately 101 million chickens in 2020.”  That number set a record for the retailer as most rotisserie chickens sold in one year and constituted more than ten percent of the one-billion rotisserie chickens sold across the fruited plain in the year the world shut down.   The price tags on Costco rotisserie chickens have read $4.99 since 2009, thanks to the warehouse’s commitment to holding the price steady.  Thus far not even the “build back better” economy has managed to touch that customer-friendly price.

Insofar as the “real” history of rotisserie chicken, annals record that the great military general and temperamental emperor Napoleon Bonaparte was obsessed by rotisserie chicken.  According to Smithsonian Magazine, Napoleon “derived at least part of his military might from chickens, which “were constantly roasted on spits” at his home in the Tuileries Palace in Paris in case he got the munchies.”   History does not record that the reason Napoleon is frequently pictured with his hand in his waistcoat, is because he’s reaching for a salt shaker.  Though the tactician is credited with having stated that an army marches on its stomach, Napoleon’s army was often forced to forage for their own food.

Even Napoleon Bonaparte cannot be credited with having “invented” rotisserie chicken. The concept of slowly rotating more than one chicken on a spit over a heat source is depicted in medieval European art dating back to the 14th century.  From the onset, the appeal of rotisserie chicken is the roasting of the meat using “spit” skewers, metal rods that went in one end of a chicken and came out the other end.  The meat would be rotated and cooked slowly over a heat source.  Rotating meat allowed it to be cooked evenly.  Records exist that show the first rotisserie was turned by dogs (though there’s no way a dachshund could ever have been exploited for this demeaning task).

During visits to France, I had the great fortune of experiencing poulet rôti (roasted chicken) straight off the spit at a hypermarket in Calais.  No country in the world is as serious about its chicken as is France which boasts of dozens of heritage breeds.  With more than thirty-percent of the chickens consumed having been pasture-raised, you’re almost assured of having a good chicken–whether you enjoy it at a small outdoor market or at at Michelin-rated restaurant.

Memories of the poulet rôti I enjoyed in France came flooding back when Über Chef Dennis Apodaca of Albuquerque’s Tikka Hut told me about Roti N.M. Rotisserie Kitchen at the Sawmill Market.  His endorsement was the impetus for me to introduce my friend Bruce “Sr. Plata” Silver to the the historic urban market which houses 27 individual local merchants.  Sr. Plata would give Napoleon Bonaparte competition in the chicken consumption department.

I’ll be honest, we both experienced a bit of sticker shock when perusing the menu at the concession stand-sized restaurant pod.  A whole chicken goes for $28, half a chicken for $18 and a quarter chicken is a relative bargain at $16.  “We’re not at Costco anymore,” Sr. Plata remarked.  Indeed, we were not.  You could buy five rotisserie chickens at Costco for the cost of one at Roti.  But then, you wouldn’t be getting chickens that “are grass fed using rotational grazing methods that build healthy soils, preserve water, and do not pollute the air, soil, or water. The birds are moved daily on fresh grasses with fresh air and sunshine. The birds graze on organic pastures, eat organic grains, and are processed on the farm.”  Owner Gilbert Aragon and Chef Lisa Sanchez have a combined two decades of cooking experience.

With a price point better suited for one-percenters than for working stiffs like us, Sr. Plata and I agreed Roti’s chicken had better be the very best in the city.  Sr. Plata ordered a half chicken which Roti’s website describes as being “brined for 24 hours before being rubbed by a signature dry rub using dry chiles and herbs native to New Mexico and placed on the rotisserie.”   While the pulchritudinous poultry was small, it was jam-packed with juicy, tender,  fall-off-the-bone meat.  We didn’t discern the piquancy one might associate with the chicken having been “rubbed by a signature dry rub using dry chiles” but we did note two distinct qualities: this poultry is no salt bomb; it’s got an herbaceous complexity that bespeaks of care and attention.  Second, the magical seasonings used is more than skin deep; it penetrates through the crispy bronzed skin into the white flesh which pulls apart in soft, juicy tatters.  It’s a delicious bird!

Sr. Plata also ordered chile roasted carrots which were topped with a kale chimichurri and roasted seeds and nuts.  The carrots were reminiscent of carrots I’ve enjoyed at French restaurants.  They’re small and thin with the stem left partially intact.  They’re also perfectly prepared at just a bit past al dente. Replete with natural sugars (sucrose, glucose, fructose, and maltose), the sweet notes are a nice foil for the kale chimichurri.  Carrots are an unsung vegetable whose time is coming.  Roti NM Rotisserie Chicken is helping accelerate that time!

My choice was a half chicken meal with included a half-bird as well as organic fingerling potatoes (roasted in chicken drippings, topped with adobo chile oil), warm flatbread and a quinoa salad (smashed cucumbers, grape tomatoes, red onion, Tucumcari feta and Roti herb vinaigrette).  Every aspect of this meal was first-rate, worthy of the city’s most expensive rotisserie chicken.  The fingerling potatoes roasted in chicken drippings reminded me, in fact, of a similar dish prepared by Chef Apodaca at Tikka Hut.  The half a salad I brought home instantly became my Kim’s property the second I walked in.  She loved it.

If your fondness for a restaurant is directly related to how you feel about the price point, you might not fall head over heels in love with Roti, but if cost is no consideration, you’re going to love the chicken.  It really may be the best in Albuquerque regardless of cost!  Of course Tikka Hut certainly has something to say about that.