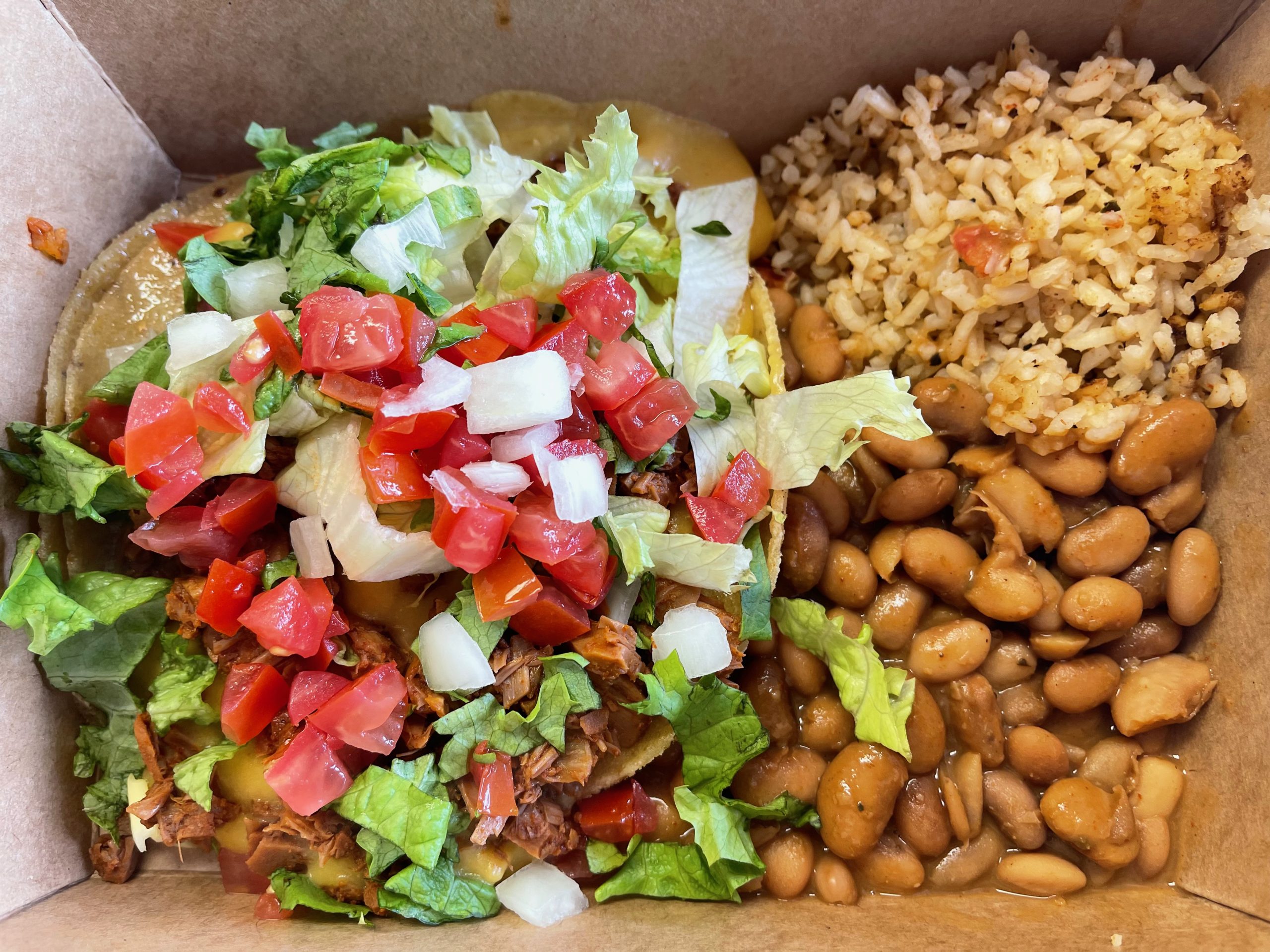 “Well, there’s not a taco big enough for a man like me
That’s why I order two or three
Let me give you a tip, just try a nacho chip
It’s really good with bean dip.
I eat uno, dos, tres, quatro burritos
Pretty soon I can’t fit in my Speedos
Well, I hope they feed us lots of chicken fajitas
And a pitcher of margaritas.”
~ Weird Al Yankovic: Taco Grande

Growing up in agrarian Northern New Mexico where we grew and consumed the bounty of our gardens was the closest I’ve ever been to a vegetarian or vegan diet.  In addition to the beans, pumpkins, corn, carrots, lettuce, apples, pears and strawberries we grew on our farm, my mom prepared quelites (lambs quarters) and verdolagas (purslane), both of which grew wild on our property.  Neither I nor any of my brothers and sisters liked these “good for you” “weeds” which we were sure were disgusting medicine in disguise.  My parents and grandparents ate quelites and verdolagas like they were made out of chocolate.

With such healthful, vegetable-rich diets, you’d think Norteños would be svelte paragons of dietary restraint.  Alas, many of us are the size of sumo wrestlers and practice the same caloric over-achievement as those behemoth brawlers.  So where did we go wrong?   Perhaps Occam’s Razor, the philosophy that the simplest answer is most often correct, can shed some light on the subject.  The most obvious answer, of course, is that we don’t eat a homegrown, vegetable-rich diet.  We eat too much of the wrong things.

WebMD admits “There’s no denying that Mexican food (and by extension New Mexican food) is delicious. But many of the entrees are made with oil, lard, and salt — and loaded with cheese and sour cream. You can get more than a day’s worth of calories, saturated fat, or sodium in a single meal.”  A dietary disaster is imminent should we continue to load up on the nadir of the foods we love.  Among them are burritos the size of battleship carriers stuffed with road graders of high-fat cheese and sour cream within the confines of a flour tortilla so big it could serve as a canopy for a pergola.

Then there’s our beloved refried beans, usually made with a shovelful of lard and topped with enough shredded cheese to cover a football field.  Speaking of cheese, one of the biggest caloric culprits is queso which is made from a block of thick, creamy cheese we eat by the cauldron along with about a thousand tortilla chips.  Even the taco salad, which sounds as if it should be healthy, is a calorie bomb.  The fried shell alone has enough calories for a developing nation and that’s before you fill it with ground beef, cheese, and sour cream.  You can’t leave out (though you should) the fat- and sodium-rich quesadilla or the chimichanga, a fried burrito.  Is it any wonder diabetes and heart disease are rampant.

Sure there are dietary alternatives that are much healthier than our sacrosanct New Mexican foods.  Surely life is still worth living if we couldn’t enjoy our favorite indulgences.  If only the foods with we grew up and love more than we do the UNM Lobos were available in heart-healthy form while retaining all the flavor we cherish from fat (remember, fat is flavor) and sodium.  Why didn’t someone tell me earlier there is such a restaurant?  It’s called Vegos and it’s been “slinging vegetables since 2019.”

To be fair, Vegos was slinging vegetables within the motorized confines of a food truck until rather recently.  In 2021, Vegos earned a Local Heroes Award for “Best Food Truck” from the savvy voters at Edible New Mexico.  In my defense (and to my current consternation), too many failed attempts to visit food trucks who don’t post their locations and hours online have sourced me somewhat on the concept.  In 2020, Vegos placed third in Edible’s best food truck voting.  That same year Chef-Owner Elizabeth Bibiano placed second for 2020 Albuquerque’s choice for Best Chef in the city.

All the love Vegos has been receiving isn’t just local. In 2020, PETA encouraged diners to “Let’s Stop Specieist Eating and Go For One of These Delicious Vegan Burritos” and compiled a list of where you can get the very best among them across the fruited plain.  The Vegan Steak Burrito from Vegas made the anointed list.  Here’s what PETA wrote: “Vegos—a pop-up and catering vegan establishment—offers its Vegan Steak Burrito as a part of a box lunch with beans, rice, and house-fried blue corn chips. It’s stuffed with rice, beans, and vegan steak (made of seitan) and served with a side of red and green chile sauce.”

Vegos has also been featured in New Mexico Magazine as well as The Albuquerque Journal.  Again, why didn’t someone tell me how good Vegos is earlier?  Maybe what matters is that I have found it and discovered that healthy, vegan New Mexican food can be delicious.  Vegos won’t necessarily change my lifestyle, but it does provide a tasty and healthy alternative when my waistline and that infernal scale are telling me it’s time to visit Vegos again.

Chef Bibiano is originally from Colorado, but the chile served at Vegos is strictly New Mexican.  So is the menu…mostly.  You’ll probably recognize everything on that menu though unless you know your way around plant-alternative ingredients, the composition of some items might surprise you a bit.  There is, for example, a chicken sandwich called “Nobody Calls Me Chicken” constructed from a soy-based product with more than 15 spices and sauces.  There’s also a jackfruit tamale.  Jackfruit has a meat-like texture.  Though it tastes like a combination of banana and pineapple, with hints of apple or mango (as you may know if you’ve ever had a jackfruit shake at a Vietnamese restaurant), under the right hands, you might think you’re eating pork.

Vegos is ensconced in a relatively nondescript shopping center on Carlisle just south of Montgomery. Its hours of operation (Tuesday and Wednesday 3pm-8pm; Thursday – Saturday : Breakfast 7:30-11am and Dinner 3-8pm) made me remember why we hadn’t visited sooner.  We like a good lunch.  Okay, so the hours aren’t convenient for us, but it’s not very far from our Rio Rancho home and the little restaurant generates some very good aromas that greet you as you enter the place and walk up to place your order.  There’s probably seating for only about a dozen guests and you’ll probably get to know your neighbors.

The menu is similar to the menu at your other favorite New Mexican restaurants.  It’s broken up into familiar categories: burritos (seven of them), specialties (such as enchiladas and chile rellenos), sweets and sides.  There’s an agua fresca of the day to slake your thirst (or maybe quell the burn from that chile).  Start off with a side of queso with chips.  You might not notice that cashews are one of the ingredients from which the queso is made, but you will notice it’s got a bit of heat.  The chips are crispy and low in salt.

There’s a scene in the 2006 lucha libre (Mexican professional wrestling) comedy film Nacho Libre in which Nacho’s ectomorphic tag team partner Esqueleto (“the skeleton”) orders two grilled, buttered and chile-dusted elotes (corn-on-the-cob) from a street vendor. Esqueleto graciously attempts to hand one to Nacho who rebuffs the offer, knocks the elotes to the ground and bellows “get that corn out of my face!” Heck, for offering me an elote Esqueleto would be my best friend.  That’s especially true if the elote is as good as Vegos serves them. Vegos toasts two sweet corn cobs, rolls them in some garlic aioli, sprinkle some fresh cilantro and finish it with our seasoned nut mixture (including almonds) and a slice of lime.  It may not be slathered in butter or piled with cheese, but it’s pretty darned good.

My friend Carlos tells me “who needs donuts when you’ve got conchas,” the crusty, cookie-swirl topped Mexican  pan dulce (or sweet bread).  Conchas–which means “shells”–in Spanish, because the twisted streusel top looks like a seashell) are Mexico’s national sweet bread. The yeasted vanilla bread roll is catching on across the border, too.  Vegos’ version is very good (maybe as good as those we’ve had made with pork lard and sweet butter).  A concha bun, by the way, is the canvas upon which the aforementioned Nobody Calls Me Chicken sandwich is made.

Another post-prandial pastry you’re bound to love is pumpkin empanadas. Empanadas are extremely versatile; they can be fried or baked pastries stuffed with sweet or savory fillings. They’re beloved throughout Spanish-speaking nations. The name comes from the Spanish verb empanar, which means to wrap in bread.  Their origin may well have stemmed from the Moors who occupied Spain for hundreds of years.  Vegos’ pumpkin empanadas are so good, it made me wonder what else they can put in them.  Sweet or savory, they’re bound to be delicious.

Vegos creates delicious, familiar food from scratch with ingredients you may not have conceived of.  Those vegan ingredients elevate New Mexican food with healthy options of favorites with which we grew up.