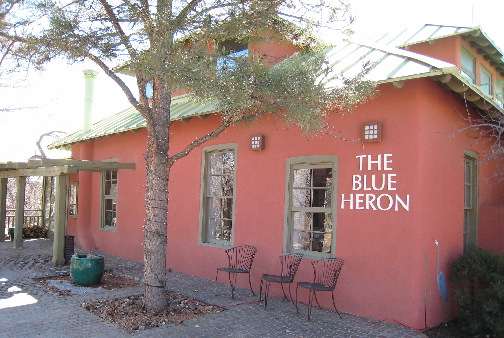 Fewer than ten miles separate the historic Spanish village of La Ciénega from Santa Fe, and though both have largely retained vestiges of their storied and proud histories, the differences that set them apart are as vast as El Camino Real, the Royal Road that has connected them for centuries. While Santa Fe has entered the 21st century as a burgeoning cosmopolitan city, La >Ciénega remains a rural enclave, parts of which have remained unchanged for generations–that despite becoming somewhat of a bedroom community for Santa Feans.

Once a rural Indian pueblo outpost, La Ciénega  was abandoned in the seventeenth century only to be resettled by the Spanish after Don Diego de Vargas’ celebrated reconquest of New Mexico. During the second Spanish colonial period (1692-1821), haciendas and ranchos dotted the Rio Grande valley.  Dons (landlords) and their peones (workers) cultivated the fertile alluvial soils, raised livestock and tended orchards of fruit.  Hard work was a way of life.  It had to be! Ranchos HAD to be self-sufficient.  The tremendous distance from Mexico City coupled with the laborious and perilous 2,000-mile trek made visits from supply caravans infrequent.  Even when they did arrive, rarely did they transport the necessities of daily life.  Fortunately La Ciénega was blessed with an abundance of surface water fed by springs, accounting for several small ponds and marshy areas (ciénegas).  Area streams included the Santa River and the Guicu Creek.

As with many Northern New Mexico villages, the acequias (ditches) dug by early settlers were the heart of the agricultural economy that was the way of life in colonial times by La Ciénega’s residents. Mayordomos (essentially water commissioners) were responsible for overseeing water allocation and maintenance of the water conveyance systems.  This is a form of community governance that exists even today throughout Northern New Mexico.

Ranchos in the La Ciénega area served as important way stations (parajes) along the Camino Real, nearly a full-day’s ride during Spanish colonial times.  The parajes provided hospitality and food for weary travelers tired of being bounced around the rough camino.  The most famous of the parajes was El Rancho de Las Golondrinas (the ranch of the swallows) which is today leased by the Colonial New Mexico Historical Foundation.  Open to the public, the Rancho’s buildings and grounds serve as an educational and cultural museum.  Today El Rancho de Las Golondrinas includes restored 18th-century buildings, a molasses mill, blacksmith and wheelwright shops, several primitive water mills, a Penitente morada (chapel) and campo santo (graveyard) and vineyards, all serving to recall the life of the Spanish colonists.  As a proud Spanish descendant, it is one of my favorite museums in the Land of Enchantment.

Another paraje on the last significant stage coach stopping place en route to Santa Fe was called Sunrise Springs.  It was a place of lush solitude with a tradition of providing much-needed respite for weary travelers.  Then, as today it was then a source of rejuvenation.  Today it is also a venue for physical and spiritual nourishment. Sunrise Springs is a sprawling 70-acre eco-resort which includes a world-class spa, 58 elegant rooms and casitas, a Japanese tea house, biodynamic gardens and an arts center where one can enjoy yoga, Tai Chi and Raku pottery.  It also houses the fabulous Blue Heron Restaurant.

The best route to Sunrise Springs (and for experiencing the village’s venerable beauty) is taking the La Ciénega exit off I-25 just north of La Bajada Hill.  It’s a bit longer than the southern route near Santa Fe Downs and the narrow two-lane road meanders slowly, but that only makes for more optimal viewing.  It’s a beautiful drive along red rock sand. The La Ciénega area is resplendent with aromatic piñon and juniper as well as mature, gnarled cottonwoods.  Residents have room to breathe with well-spaced acreage housing almost as many mobile homes as adobe-hued stucco dwellings.

Sunrise Springs is not only idyllic in its quiet serenity, it espouses meditative techniques designed to attain Samadhi, a Sanskrit term used in Buddhist and Hindu meditations.  Samadhi is quite simply “bliss” and the spa teaches that bliss can be attained through mindful breathing and loving kindness.  Walking through the grounds’ well trodden foot paths, it’s easy to forget the cares of the day.  The soothing sounds of cascading water harmonize with the call of the many birds which spend much of their time in these tranquil settings.  One of those birds is the blue heron, a large wading bird with a wingspan of almost six feet.  Sunrise Springs named its fabulous restaurant for this magnificent bird.

The Blue Heron is a blissful oasis from the maddening crowds drawn to Santa Fe.  It is a very attractive milieu in which to dine at any season of the year, particularly if you have either a view of the spring-fed pond or, weather-permitting, you dine on the deck beneath the centuries-old cottonwoods.  An article entitled “New Directions in New Mexico Cuisine” in the March, 2008 edition of New Mexico Magazine touted the Blue Heron’s use of local, sustainable ingredients “whenever possible.”  The article included photographic evidence of the restaurant’s seasonally inspired innovations.  The article inspired our first visit to La Ciénega in years and our inaugural visit ever to the Blue Heron.  By mid-meal, we contemplated returning for dinner.  Santa Fe quality cuisine without tripping over other visitors made for a very pleasant dining experience.  The Blue Heron inspires hushed tones and a relaxed pace.

You’ll do well not to be in a hurry because no one else is.  Take the time to imbibe the beauty by which you’re surrounded before taking in the menu (which is a thing of beauty in its own right).  Beverages include exotic loose leaf teas from China, Japan, India and Sri Lanka as well as gourmet coffee, Sunrise smoothies and the best ginger lemonade you’ll ever have.  The slight tartness of lemon melds harmoniously with the pungent fragrance of the ginger.  Visit at around noon on a Saturday or Sunday and you’ll be treated to a relatively limited brunch menu with fewer than ten entrees.  At first glance those entrees may seem parochial–like the brunch menu you’ve seen a hundred times–but what the Blue Heron Restaurant delivers is exquisite–better than just about anywhere you’ve had brunch.

You might opt for the three-egg omelet constructed of Sparbo heirloom eggs, Cheddar and Jack cheeses, green chile, spinach, mushroom, onion and tomatoes.  The ingredients engorge the omelet to the point that the oleaginous ova can’t quite be folded over to blanket those ingredients.  The ingredients are fresh and delicious, and the eggs are nonpareil, like the fresh farm eggs on which I was raised.The omelet is served with roasted Yukon and sweet potatoes along with housemade toast.  The sweet potatoes, in particular, are terrific. If you’ve ever lamented the desiccated sweet potato fries that seem typical of sweet potato offerings, you’ll rejoice at the moist, tender deliciousness of these orange hued starch tubers.

There’s only one thing that can improve this brunch entree and that’s high quality honey cured bacon.  Fortunately, you can order a side of this sweet and salty deliciousness for a mere pittance. Another wonderful brunch option is the wild mushroom ravioli made with roasted shallots, sherry cream sauce and Parmesan Reggiano.  This magnificent mélange of ingredients will play a mellifluous tone on your taste buds.  For me, it starts with Parmesan Reggiano, considered by some the “king of cheeses par excellence.”  It is the most famous of all Italian cheese, its genuineness safeguarded by the government through very strict regulations.  Parmesan Reggiano is aged for a minimum of 24 months which accounts for its distinct bouquet and strong flavor.  The sherry cream sauce is rich and savory while the wild mushrooms are robust and fleshy with an intense flavor that is both sweet and woodsy.  It is an inspired flavor combination that covers four or five al dente ravioli tablets each as big as a drink coaster.  Best of all, this is not one of those frustrating “five forkfuls and you’re done” entrees served at some brunches.  You get your money’s worth at Blue Heron.

The dessert menu will appease the most discerning of taste buds.  Though only four desserts are offered, you’ll be challenged to pick one.  They all sound fabulous–and deliver on that promise.  A ramekin filled with heavenly goodness is how you might describe the ginger and lemongrass infused crème brûlée.  Each penetration of the caramelized top layer of caramel was met with a rich, flavorful custard the likes of which you rarely find.

Equally inspired is a housemade mango sorbet with a cookie.  Refreshing as a cool dip on a hot summer day, the mango has the tanginess of mangos out of season.  On mangoes and sticky rice, that would be a major faux pas, but it works well on sorbet which sometimes tastes best when it puckers your lips.  This was excellent sorbet.

The Blue Heron, like Sunrise Springs, is a perfect stopping point on the way to Santa Fe and if you’re like us, you might enjoy it so much, you might not make it to the City Different.